I feel I’ve let you all down. Last week, I hinted that there might be a surprise forthcoming in this week’s article. Unfortunately, this surprise has not yet arrived, and so must be postponed until next week at the earliest. I know, I’m weeping too. With that said, I’ll try to make up for it with another great edition of Whinston’s Whisdom here at Quietspeculation.com! (plug plug plug plug). The topic I’ll be taking today is the upcoming set Scars of Mirrodin. While there are many cards of immediately obvious value (read: Planeswalkers), as speculators, it’s our job to find the cards that nobody’s looking at. So go to Mtg Salvation, open the spoiler, and let’s go down the list together: 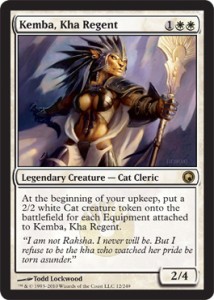 Kemba, Kha Regent: As pointed out in the exclusive QS spoiler earlier on this site, Kemba is unique in that she provides White based aggro decks a source of card advantage after the rotation of Ranger of Eos. Especially in a deck with Stoneforge Mystic, and with the less prevalent removal in the upcoming format, Kemba could get up to pumping out 2-3 tokens per turn. And even once she’s been killed, now you have all these creatures to put your equipment on! Buy at $3

Leonin Arbiter: White Weenie just won the Extended Pro Tour and this guy’s name hasn’t even been floated as a possible addition? Criminal. Not only does Leonin Arbiter shut down Fetchlands, he also single-handedly wins games against any type of Mana Ramp deck, and prevents combo decks from tutoring. Very playable alongside Ethersworn Canonist in Eternal formats as a disruptive dude, pick these guys up at anything under $4 apiece.

Tempered Steel: Imagine the following sequence of turns: T1 4xMemnite, Mox Opal, Swamp, Painsmith. T2 Plains, Tempered Steel, attack for 9!!! Is this not the new Tarmogoyf? Yes, this is a joke. No, do not speculate on Tempered Steel.

Trinket Mage: Why have people not been talking about this guy? One of the most powerful cards in every format he’s been legal for, he’s reprinted, but suddenly he’s not any good? Just the fact that he’s now staying legal in Extended should be enough to boost the values of several key cards. My pick for the power Uncommon of this set. Buy at $1

Spikeshot Elder: Quietspeculations’ own exclusive preview card has significant potential both in Standard and Extended. While at face value, he is rather unimpressive, with 3 mana for 1 damage not being the benchmark of our current format, we must remember that he exists in the same set as a significant amount of equipment. 1 damage for 3 mana? Subpar. 3 repeatable damage for 3 mana? Excellent. 5 Repeatable damage for 3 mana? Gamebreaking. While Equipment might be a bit too slow for Extended, there was a very good Extended Goblins deck that showed up in Amsterdam, piloted by such players as Bram Snepvangers and Julien Neujitan, an inspiring endorsement in my opinion. Pumping Spikeshot Elder’s power with the Goblin Lords like Chieftain and Boartusk Liege allow it to shoot down opposing forces left and right, and is especially useful against the White Weenie build that won the whole event. I would buy at $4.

Chimeric Mass: Let’s get the obvious out of the way first. Chimeric Mass is utterly ridiculous with Trinket Mage. Need a finisher with your Control deck that also has utility in the early game? Want a way to increase the value of your Profilerate spells? Hell, just looking for an efficient creature that doesn’t die to Day of Judgment or Journey to Nowhere, and can usually be immune to Instant speed burn (i.e. every removal spell in the format)? Chimeric Mass is your go to guy. While artifact removal may be more commonplace with what we’ve seen of this set, Chimeric Mass is still a powerful option for any deck. Buy at $3.

Wurmcoil Engine: There is no way to describe this guy as anything other than “the colorless Titan.” While there are a few removal spells (read: Journey to Nowhere) that can truly deal with this guy, he’s one of the biggest roadblocks you can lay down in front of your opponent’s Geopedes and Steppe Lynxes. Baneslayer’s 5 toughness is suspect to those Geopedes, or even a ping from a Collar equipped Sparkmage, but Wurmcoil Engine maintains value after it dies. It even gives Mono-Blue a Baneslayer-esque finisher. Buy at $8. 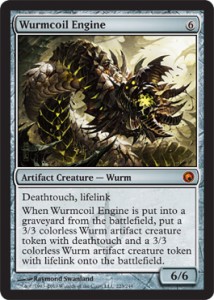 New Dual lands: This is one of the few cycles of dual lands that are more beneficial for aggressive decks than for Control. I really love these, and feel they will become much better for the aggressive decks over the M11 duals, if worse than the Fetchlands. However, they do provide allied color combination’s, filling a different niche. Definitely some cards you want to be looking to pick up. When buying them, however, it’s important to rate them by color. Because of the controllish tendencies of their color combinations, the U/W and U/B lands will be worth less than their counterparts. So buy those two at $4, and the others at $5-5.50.

Tip of the Week: Warren Instigator

While this whole article was pretty much an extended pick of the week, I thought it would still be good to give you a pick that is currently available, so that when everyone is caught up with Scars of Mirrodin, you get to swoop in behind the scenes to make some quick cash. Warren Instigator was a key part to Snepvanger’s and Nujiten’s Goblins deck from Amsterdam. While 2 key cards that made Instigator so good, Simian Spirit Guide and Brute Force, will be rotating out, Instigator is still certain to be played in any build of Goblins. Goblins in Extended fits much the same role as RDW, but it has more resilience. It has more effective sideboard options, like Thoughtseize, Earwig Squad, Deathmark, and Thorn of Amethyst, but also has more explosive draws, powered completely by the Instigator. Double Siege-Gang Commander + Goblin Chieftain on turn 3 sounds good to me! Even in the non god-draw scenario, Instigator is still a potent threat with any kind of power bonus from a lord, and a difficult creature to deal with on the early turns. I’ve picked up 16 of them online for 4 tickets each, though I haven’t started doing the same in paper markets yet, so you have the chance to beat me to it! (Update: I wrote this article on Saturday, when I had bought the Instigators on Wednesday. By Sunday, Instigators had gone up about 20% on MTGO. I cashed out to put together some decks, but it just shows how fast the market can change).

That’s all we’ve got this week, but hopefully my surprise will arrive in time for my next article. Until then…

–Look beneath the surface