“What happened after the honeymoon? Did desire grow or did familiarity make partners want other lovers? Was the notion of ever-deepening romance a myth along with simultaneous orgasm? The only time Rifkin and his wife experienced one was when they were granted their divorce. Maybe in the end, the idea was not to expect too much out of life.” -Gabe Roth

Ask anyone who can count the length of their marriage in decades and a similar refrain is almost guaranteed to emerge: marriage takes work. Sure there’s the early infatuation and attraction, the courtship, and the riveting journey of mutual discovery and exploration. But with the lengthening of years, romantic love must arrange to share space with companionate and new challenges come to the fore. How do you develop your relationship? How do you keep things interesting?

Woody Allen explored these themes in his superb film Husbands & Wives, from which the opening quote was taken, and today I’ll be exploring them in the context of Magic‘s preconstructed products. Remember what it was like to tear into your first deck of Planechase? To dig through the wildly maniacal schemes of Archenemy? To challenge your mate to match after match with Duel Decks? Think back to those heady, halcyon days of frantic, card-tapping infatuation, and the oversize cards, and the smell off the cardboard when you peeled off the plastic shrink wrap. Let your mind wander to those memories for a few moments.

What happened? You and those decks were close but over time you just became used to each other. Maybe you thought those decks would always be there and began to take them for granted. Maybe you didn’t put the work into it.

I’m here to tell you that it’s not too late! It’s no chore at all to rekindle the romance with your favourite precons; all it takes is a little spicing things up! Soon you’ll have a new appreciation for your old flame and see things in a whole new light. In today’s Magic Beyond the Box we’ll be paying some of the game’s casual products a visit and exploring new ways to play each that can add a lot of enjoyment to each of them. 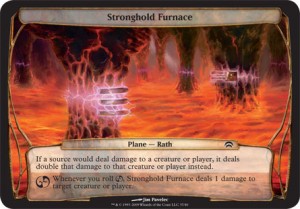 Planechase was a blast when it debuted in 2009 and introduced us to Planar Magic. Each of the four releases contained 10 oversize plane cards as well as a tailored-to-fit 60-card deck that was optimised by the selected planes. Although the planes were meant to augment a particular deck (yours or your opponent’s) players quickly found that the concept was quite adaptable and variants sprung up almost immediately. Some mixed them in with their Commander games, others shuffled all 40 planes together and dueled around a shared deck.

Perhaps the most intriguing of these variants, however, is The Eternities Map. Unlike most other variants, this takes a little art-class skill to pull off but once organised the payoff is well worth it. You begin by taking a sheet of thick cardstock or cardboard and buy 40 of the Ultra Pro oversize card sleeves (or more, if you’ve picked up the extra promo planes from Tazeem to Tember City). Affix these sleeves to the backboard with glue or strong tape in a grid-type formation with the translucent side facing out.

Once you’re ready to begin a game, gather your mates and shuffle the deck of Planes. Then, without looking at the front of the cards, fill the cardsleeve grid with Plane cards, with their cardbacks facing out. Once you begin, take one of the ones in the middle and turn it around so that it faces outward, as shown in figure 1.0. 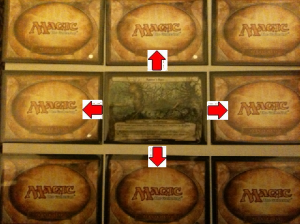 With the revealed Plane serving as the one you all start on, begin a game of Planar Magic! The twist here is that rather than moving a plane you leave to the bottom of its stack you are able to physcially move one square in any of the four immediate directions every time you Planeswalk. This means that you might Planeswalk and move one square up, which becomes your active Plane (affecting all players), but if one of your opponents liked where you were before, they might Planeswalk and move down one square, taking you back. Each time you move you reveal the new Plane by turning it around in its sleeve and once revealed it stays visible to all players.

Thus, depending on your exploratory spirit (and luck of the draw) you might spend a game striking out in uncharted directions, or should you find a plane suited to your particular advantage you might spend your die rolls every round trying to get back there! 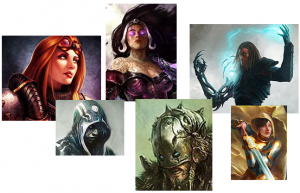 It might have escaped notice, but with the release of Duel Decks: Elspeth vs Tezzeret we now have six planeswalker-themed Duel Decks available, and it’s quite an esteemed assemblage! Of course, after your twentieth time bashing in on Chandra as Jace, or going through the motions again with Garruk, you might be forgiven for allowing a little ennui to slip in through the cracks.

Lost in the shuffle might be the fact that there are now a perfect amount of decks available for some multiplayer mayhem! The six decks are reasonably well-balanced even outside their own Duel Decks framework, and blend together in a perfect mix of competitiveness and flavour. You can try aligning the decks any number of different ways. Put all six names in a hat and randomly draw. Bend flavour a little bit and go for a theme of heroes (Jace, Elspeth, and Garruk) versus villains (Liliana, Tezzeret, and- why not- Chandra). Round-table style, free-for-all, or even dive in for a game of Emperor– anything can happen when you pit the game’s marquee personalities against one another and see who’s left standing! 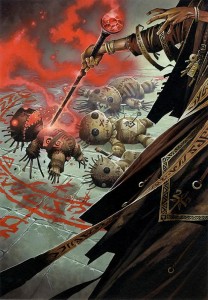 Archenemy: A Gathering of the Tribes

This was something we did right off the bat when Archenemy was released last year and it’s become such fun that it’s even evolved into a mini-format. Tribe deck construction is a fun bit of scenario-building and has some of the same elements as building a cube: in both cases you’re sculpting a play experience. The idea for A Gathering is that while it’s fun to just play the game as a game and try and topple the king of the hill there’s an extra level of enjoyment that comes when you can champion a cause greater than your own.

Here’s the short of it: build a set of decks that represent some storied faction looking to topple the greatest villain for their time, then let your mates play out the scenario with these ‘self-made precons.’ The most popular one here was the descendant of the first “Gathering of the Tribes,” which pitted the races of Zendikar against a decidedly non-Eldrazi threat. Kor and Merfolk, Goblin and Vampire, and even the Elves had a look in these five mono-coloured decks that were essentially a cycle all to themselves (for instance, each played the rare land associated with their colour, such as Valakut and Magosi).

Of course, tribal is but one of any number of themes you might opt to pit your Archenemy against. Perhaps planeswalker-themed decks (no, not these), or decks that stress the particular role associated with a colour (a blue deck stuffed with countermagic, a red one filled with burn spells, and a white one in the healer’s role). Get creative and design your own scenario, then see how viable it plays out. If you can get close to a 50% win rate against the Archenemy you might be onto something!

Bring Back That Loving Feeling

As mentioned at the beginning of this column, for most of us successful relationships are those you work on and not things that ‘just happen.’ Once upon a time you were excited about Planechase, or Archenemy, or Duel Decks, and chances are good you even plunked down hard-earned money for them. If they’ve been neglected and cast aside for younger models perhaps you’re missing out on something truly fulfilling. Take them down off the shelf and give them a second chance.

After all, if you’re willing to put in just a little time to spice things up you might just fall in love all over again. 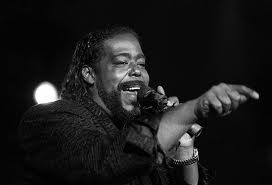 Facebook
« Enter the Darkness, Get Burned by the Flame
Beating Mythic »