So I spent all week last week in Denver for GP Denver. In fact, when this article goes live I’ll probably be on a plane back home. I’d love to do something awesome and GP related, but unfortunately they kept me quite busy. So for now I want to talk about something else. (But soon there will be interesting stories from GP Denver!) I wanted to talk about what makes a game of Magic work.

There are a lot of things that make the game work but, specifically, I want to talk about what keeps the game in check. What makes your creature die when it takes lethal damage? Why do you lose the game when you can’t draw from your Library? Why do two Legendary Permanents die when they are both in play at the same time? All of these things are taken care of by one thing, State Based Actions.

State Based Actions are the things that keep the game in check. SBAs take care of a lot of the things that players usually just take for granted. SBAs are a list of things that the game checks for, things that are “wrong.” They are checked many times during a game and most players would never know it, but they are what make a game of Magic work. Specifically they are checked before any player receives Priority, and during the Cleanup Step at the end of each player’s turn. If a SBA affects the game in any way, they will be checked again before the game progresses. For example, if you cast a Pyroclasm, deal 2 damage to all of your 3/3 elves, but your Elvish Archdruid is destroyed, all of your 3/3s become 2/2s with 2 damage on them and get destroyed. SBAs are what takes care of these messy situations.

There are 21 different SBAs and each of them is important to making a game of Magic work. Some of them are to handle game mechanics that are not seen very often, and a couple of them are there for Commander or Archenemy variants, but if they didn’t exist, the game wouldn’t be able to progress like you’re used to.

Let’s start off with State Based Actions that cover how you can lose the game.

If a player has zero or less life, they lose the game.

This is the most common way a game of Magic ends. Since SBAs are not checked during the resolution of a spell, if you cast a spell that by itself causes you to lose life and go below zero, but gain life back up to at least 1 in the same spell, you wouldn’t lose the game. 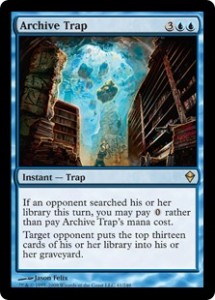 If a player attempted to draw a card from an empty library since the last time SBAs were checked, they lose the game.

This is what makes Archive Trap so exciting, and milling your opponent’s deck a strategy at all.

If a player has ten or more poison counters, they lose the game.

This has become more common lately with the new infect mechanic, and quickly becoming a more common way to end a game.

And that’s it. All the exciting ways to win a game of Magic can be boiled down to three basic things. Now how about creatures, there are a lot of ways a creature can die.

If a creature has zero toughness or less, put it into it owner’s graveyard.

This is again common recently because of infect, but really anything that puts -1/-1 counters on a creature can make this happen. There are some creatures that can have this happen without the use of -1/-1 counters, but that is the most common way to make this happen. It is worded very specifically as well. If this were to “destroy” the creature instead of just put it into the graveyard then indestructible and regenerate would both be a defense against this. Unfortunately we know it’s not.

Damage stays on the creature until the end of the turn, so if you Shock a 4/4 twice it will fall to this SBA. It also is worded specifically. Since this action destroys the creature, indestructible and regenerate both work against this.

If a creature has toughness greater than zero, and it’s been dealt damage by a source with deathtouch since the last time SBAs were checked, that creature is destroyed.

This is a fairly new addition to the family of SBAs. With the deathtouch mechanic there needed to be some way for the game to know that a creature should be destroyed, and this is it.

Now what about a newer card type? Planeswalkers have added a few more SBAs to our list.

If a planeswalker has Loyalty 0, it is put into its owner’s graveyard.

This can happen by using its abilities or by it taking damage, but either way it goes away when all of its loyalty counters are gone.

If two or more planeswalkers that share a planeswalker type are on the battlefield, all are put into their owners’ graveyards.

This is called the “planeswalker uniqueness rule,” but you won’t likely hear it referred to it as that, you will be to focused on how your Tezzeret, Agent of Bolas was taken down when your opponent played their Tezzeret the Seeker.

That’s it for this week, next week we will look into the rest of these things that keep our favorite game rolling along.

Some of the SBAs have the phrase “since the last time SBAs were checked.” This is there because like I mentioned before, SBAs are checked after they change something. If you were to have a Platinum Angel in play and no cards in your library, SBAs would continually try to make you lose the game if this phrase didn’t exist. It wouldn’t affect paper Magic so much, players would just keep playing. But Magic Online players would be stuck.

4 thoughts on “State Based Actions and You!”