I haven’t always loved preconstructed decks. Although I’ve come to be almost inextricably linked to them now through writing here and on Ertai’s Lament, my passion for collecting and playing them has a rather pedestrian origin. The more I’ve thought about it, the more I’ve concluded that it stems from something that many (if not most) of us have done at least once: quit the game.

This is the third time I’ve taken up Magic: The Gathering as a hobby, and it’s certainly after the longest drought. I began at the very start of the game and continued on through Legends, quitting when I left home and moved on my own out of state. I fell into it again somehow right around Mirage, and stuck with it a little longer this time, quitting right before Mercadian Masques.

Returning once again for Zendikar, it seems that a fair part of the reason that I fell in love with preconstructed decks was because I had missed so much of Magic‘s history in my time away. Whole blocks had come and gone, new mechanics surfaced and submerged, stories were started and finished their telling.

Entire worlds had passed me by.

I had neither the time nor inclination to go chasing down scads of booster packs to catch up on lost time, and I’ve never been all that partial to any format other than Standard. Although I’d only owned a single theme deck in my time before (Deep Freeze from Tempest), I suddenly discovered that they made the perfect little windows into the sets I had missed. Having the interest kindled, the next step was to go about collecting them.

This presented some rather unique challenges. For one, it was largely unexplored country. I really had no idea what was a ‘good’ price for a precon deck, and what was a rip-off. Were some decks better than others? More valuable? More scarce? It wasn’t too hard to gauge the price of Magic singles as there are always scores of dealers out there vying for business, and one only had to check a few pulses and read a few articles to get a feel for what was the fair market value for a card. We may no longer have access to standardised pricing like Beckett for sports cards or Scrye for Magic, but in the age of the internet those resources are obsolete.

Another factor adding to the difficulty was scarcity. You can go on eBay at any time and you’re all but guaranteed to find [card Stoneforge Mystic]Stoneforge Mystics[/card], [card Tezzeret, Agent of Bolas]Tezzerets[/card], and anything else you might want for Standard. You’re highly likely to get anything you need whenever you want it for Extended. Vintage and Legacy? You’re probably good. And if you happen to have a spare $100,000 burning a hole in your pocket, what says ‘sound investment strategy’ quite like a BGS-10 graded Beta Black Lotus?

But when it comes to precons it’s not quite so easy. I would have liked to have had some sort of guide or advice as I began my collection, and as the proud owner almost 150 precon decks I felt it might be time to create one for others who might be starting to do the same thing. We’ll begin today with an overview of the series to come. 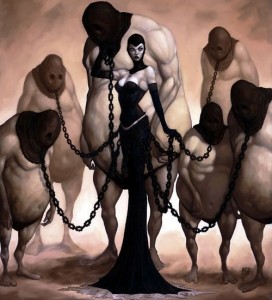 In order to build a good precon collection, it helps to be one of three things.

This is the easiest way to assemble a collection: just buy ’em all and damn the cost. As cruel fate has it, this category probably doesn’t cover a great many of us. It certainly doesn’t me.

This is the one I’d recommend, effectively trading time for money. If you are able to manage the impulse to buyitnow, you can slowly and steadily amass a very solid collection for a relatively modest amount of money. Here’s an important observation: you can buy most precons for between $5.00 and $8.00, a  figure that includes shipping. There are a small number of decks you’ll rarely see at this price point, but that’s where the patience comes in. One of the most expensive theme decks to acquire is Tempest’s The Slivers, which typically sells for $60-80. To my disgust, I once missed bidding on an auction for two sealed Tempest decks, one of which was The Slivers. When I saw the closing bid was $10, I wanted to retch. The deals are out there, though, and they’re waiting to be found. Of course, when all else fails, that leads us to our next characteristic:

Know that most precon decks hold the value they’re assigned for one of three reasons. One is demand. Obvious, right? But to dig a little deeper, most of the expensive precons contain something in demand beyond the precon itself. The best example is the Betrayers of Kamigawa deck Rat’s Nest. Nobody cares much about the Rat nezumi anymore, outside of a few tribal enthusiasts whose dreams contain waterfalls of Relentless Rats, but this deck typically clocks in at the $20-25 level. The reason? Umezawa’s Jitte. How about Prophecy’s Distress, which retails for the distressingly large sum of around $40? Hint: it ain’t the Maggot Therapy. No, we’ve got the wildly-popular Avatar of Woe to thank for this one.

Our friend the Avatar is a nice transition to Reason Two: inertia. Unlike the singles market, where inertia can be death, the precon market is marginal enough not to demand the fastidious attention that a singles inventory does. Prices can spike, but they tend to stick around that level. The Avatar of Woe has since been reprinted twice (and again as a Pro Tour foil), and you can find her at your card-merchant-of-choice for around five bucks. For a more modern example, the prospect of a foil Student of Warfare spiked the price of Rise of the Eldrazi’s Leveler’s Glory. How many Students do you see burning up the tables in Standard? She faded, but her intro deck’s price often stayed right where it was: too high.

Finally, we have Reason Three: cult status. This is a characteristic generally found in tribal decks of the Elf, Goblin, and Sliver varieties, as folks from all stripes of the game do love their tribes. As we’ll see ahead, this boosts the price of decks as varied as Scourge‘s Goblin Mob and Legions‘s Sliver Shivers to Lorwyn‘s Elvish Predation. All three (and others) punch above their wight because they offer players a readymade tribal experience. 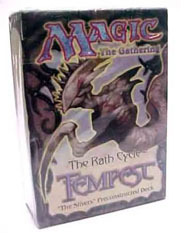 So what does this have to do with crafty? Simple. Unless you’re an absolute purist who absolutely must have the original box and insert, you can bypass these ridiculous prices altogether by assembling the deck from scratch out of singles. That $60-80 The Slivers? How does less than $24 on CoolStuffInc sound? That’s using Tempest versions of each card. Opt for more generic Counterspells and Dark Banishings and you save even more. If, like me, you’re something of a traditionalist who at least wants to preserve the feel of the deck, throw in a little extra for some Tempest Islands and Swamps at about thirty cents apiece. You’ll still save a bundle.

The documentarian nature of the Internet means that the insert manual you’re sacrificing is probably excerpted on some Wiki somewhere. Here’s another pro tip: the old inserts used to be standardised booklets that were the same for each theme deck. In other words, get one and you’ve got ’em all.

In the coming weeks I’ll be looking in great detail at the preconstructed marketplace. If you’re a collector of precons, or just looking to start, you may be interested to know that we’ll be checking every step of the consumer experience, from buying through an online retailer versus eBay; which decks will save you the most to make yourself; and how much you really should (and should not) be paying for your precons. The answers might surprise you.

For simplicity’s sake, I’ve divided Magic‘s precon history into three broad periods. The “Vintage Era” begins with the advent of the theme deck way back in Tempest, and ends with 2002’s Judgment. The “Classic Era” picks up from there with Onslaught, and finishes with Coldsnap, from 2006. Finally, that leads into the “Modern Era”, which began with Time Spiral. Naturally, we’ll also be looking at the Core Set decks from each era, and will also be taking a critical eye on other releases such as Beatdown and the Duel Decks.

Thanks for joining me today. If you have any specific areas of interest or concern, please don’t hesitate to make a suggestion in the comments below. See you next week, when we begin with the Modern!