It hasn’t taken long for Green Sun’s Zenith to find its place in Legacy Aggro and Aggro-Control decks. You are sure to find people searching up Noble Hierarch, Tarmogoyf, Knight of the Reliquary and Dryad Arbor in nearly any Legacy tournament. The card has a maindeck home in NO RUG, NO Bant, Zoo, New Horizons, Rock decks, and Elves, to name only a few. 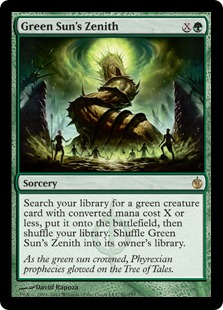 Turn 1 Green Sun’s Zenith for zero finding Dryad Arbor has even been a common play in the recent Modern Zoo lists—prompting it to be banned in Modern.

Aside from being both a mana accelerant/fixer and Fatty Finder(TM), the shuffle effect is so synergistic with other Legacy staples like Sensei’s Divining Top, Jace, the Mind Sculptor, Brainstorm, and Sylvan Library that it isn’t difficult to see why the card is so popular. Even if it gets countered, it probably grew your Tarmogoyf a little by adding a Sorcery to the Graveyard.

The card is nothing but upside.

Yet, with all these positive attributes, I giggle a little when I see decklists with no Green creatures as Zenith targets in the sideboards and no one-of’s maindeck. I took some time going through the volumes of Green creatures in Magic’s past—finding some Silver Bullets to counter common Legacy lynchpins. It should be noted that these findings can also be used in conjunction with other tutors such as Natural Order, Fauna Shaman, Worldly Tutor, Living Wish, Glittering Wish, Eladamri’s Call etc. etc.

I tailored this list towards Natural Order and Zoo decks, leaving most of the Elf cards alone.

Not much to say here. If you are playing white, Pridemage is maindeckable in any case, so being able to dig one up with GSZ is just the cat’s meow. The creature blows up Aether Vials, Equipment, Artifact Creatures, and random Enchantments. It attacks like a Watchwolf, and cheers on others when they battle solo. Such a team player.

Honorable Mention: Trygon Predator. This flying beast can be a house against certain decks (Affinity, Enchantress), but I’ve found him to be a bit underwhelming. He doesn’t work so well if you are trying to beat an Umezawa’s Jitte, as they can just shrink him so he won’t trigger. He also doesn’t work very well vs. Vedalken Shackles, as they can just steal him before he gets a hit in. He’s better in Vintage, or if you don’t have access to white for Qasali Pridemage.

The green/white bane of combo. His presence is strange as he has the added backlash of turning off the very card you cast to find him. You are going to shuffle, shuffle, shuffle, and draw GSZ next turn – you know you will. I initially disliked playing GSZ to find Gaddock Teeg, as I was usually running Natural Order myself, but I think his maindeck inclusion in Channel Fireball/Brian Kibler’s Modern Zoo deck proves that as a one-of, Gaddock Teeg is perfectly fine. If you aren’t convinced, here is a list of Legacy staples he shuts down: Ad Nauseam, Tendrils of Agony, Force of Will, Goblin Charbelcher, Natural Order, Engineered Explosives, Hive Mind, Jace, the Mind Sculptor, Dread Return.

NOT SO OBVIOUS GSZ TARGETS

If you haven’t tried this card out, I strongly urge you to do so. I’ve been playing 1 maindeck in my Natural Order builds for some time now, and don’t plan to go back. When he is on the table, and you have open mana, he controls so many things – especially in Aggro-Control mirrors that rely on Tarmogoyf and Knight of the Reliquary to win. This card actively controls their size, and will often win in a straight up fight with either Tarmogoyf or Knight. He takes a small amount of work, but is often larger than Tarmogoyf after a turn or so (if you need him to be). Against Zoo and Merfolk, he can gain you the life to turn a race in your favor. Oh, and as a nice side-effect, he is a complete house vs. Reanimator, Life from the Loam, Dredge, and possibly Snapcaster Mage (if that becomes a thing). If you plan on using him, fetch green mana producers whenever possible, as he does get hungry for green. Most of my opponents have to read the card a couple times (especially when I say that I’ve gained life), but I think this card will become a staple in Green decks. The Ooze already has me thinking of him taking spots away from Tarmogoyf, and I can see that happening more and more if the right metagame appears.

Olle Rade’s invitational card hasn’t seen much play in Legacy that I know of. His effect isn’t overly powerful – but he can fill a niche role much like Mother of Runes. At best you can find him with GSZ to blow a couple Knight of the Reliquary past removal in an alpha strike – sacrificing lands to grow the Knights. You can’t chain targets on the same knight, so resolve the first Safekeeper ability, then hold priority while saccing lands on other creatures, or Sylvan Safekeeper himself. Often they won’t see it coming and by the time GSZ has resolved, their Swords/Paths/Doom Blades are dead.

I have been including him in my sideboard for Merfolk and Goblins matchups. In my experience, the Natural Order player is often siding out the Natural Order package (4-5 slots) versus Merfolk, as it can be too slow. The matchup then becomes about two things: Islandwalking, and Submerge. Olle protects you from both. Naive Merfolk Scrubs(TM) will unknowingly swim their fishes into the desert, to be eaten alive by gigantic Lurghoyfs and Knights. Naive Merfolk Scrub (TM) translation: I will sacrifice all my islands when you try to alpha strike me with Islandwalkers. With Olle on the table, you also don’t have to fear a Submerge in response to fetchland – or any other time. When facing Goblins, Tarmogoyf is easily their biggest problem, and they need to rely on either a cycled Gempalm Incinerator, or a Stingscourger to get past the blockade. Olle again shuts down both of these outs.

I’ll also try to raw-dog Sylvan Safekeeper alongside Gaddock Teeg vs. Combo, as they’re only going off if they bounce Gaddock Teeg somehow.

This Faerie plays much the same role as Sylvan Safekeeper. The Protection from Blue ability naturally lends itself as a foil to Merfolk. Bounce a Tropical Island to avoid Islandwalk. Untap a Tarmogoyf to block. Untap a Knight of the Reliquary for additional activations (and block). Untap that Noble Hierarch for the white mana you need for your Swords… etc. etc. The card is tricky, but I would advise a closer look at it, and his flying ability can become much more attractive if you are running equipment.

Go ahead, Look it up. I imagine the banning of Mental Misstep in Legacy will cause a resurgence of High Tide combo for anyone who owns Candelabra of Tawnos. High Tide runs on a plethora of instants to fuel its namesake (Instant) and combo off. Ichneumon Druid isn’t awful vs. Ad Nauseum either. The damage should reduce their ability to draw cards off of Ad Nauseum, or prevent them from using a number of Dark Rituals/Cabal Rituals to re-ramp mana into Tendrils of Agony. Quick combo decks are another matchup where Natural Order players may be siding out their NO package. Ichneumon Druid is another threat, fetchable with GSZ, to fight those decks from the sideboard.

Odds are good that if you play Green Sun’s Zenith, you are also running Natural Order. Natural Order has a huge upside but can be a complete blowout if countered. Xantid Swarm, however, can protect you from that, as well as any other spells you are looking to cast. You can happily sacrifice the Xantid Swarm to Natural Order without fear of counterspells: the effect lasts until end of turn, whether the Xantid Swarm is in play or not.

One of the benefits of Green Sun’s Zenith is being able to tutor for creatures that are pretty bad in multiples (Gaddock Teeg). Vexing Shusher falls into this category as well and fits into a similar space as Xantid Swarm. It costs more but is uncounterable and has the added benefit of protecting YOUR counterspells and removal on THEIR turn. I find this guy more effective in Bant builds, as decks representing red spells (RUG) will have Hydroblasts and Blue Elemental Blasts sideboarded against them, which can easily kill off Shusher.

The criteria for Green Sun’s Zenith targets in Legacy are pretty restrictive, as Legacy’s has such a high standard for quality. The cards need to be cheap and any effects they have must also be powerful or free. For the most part, I didn’t consider many creature’s with a converted manacost above three as they are essentially too slow for Legacy.

As powerful as Green Sun’s Zenith is, there’s still plenty of untapped room for it’s use. Sure, you can play your eight Tarmogoyfs, fetch mana accelerators, Natural Order fodder and fatties, but don’t overlook a spot or two in the sideboard for that bit of spice to turn around a bad or awkward matchup.

Mark Hinsz has been playing Magic sporadically since 1994. He took a long break from Magic throughout college, but has been playing competitively since 2003. He names Legacy as his favorite format, but has a few PTQ and States Top8s to his name - as well as a limited 2 Headed Giant States title. He enjoys taking breaks from his wife and two daughters to fill the family mini-van with degenerate Magic players and travel throughout the Midwest for PTQs, GPs, and SCG Opens. He also maintains that Rootgrapple is a perfectly fine Cube card, even if you don't have Doran, the Siege Tower in play.