I wasn’t able to play as much Commander this past weekend as I would have liked because I spent my time practicing Sealed Deck for the Grand Prix Trial that my local game store ran. The effort seemed to pay off as I was able to come away from the 8-man event with the three byes I’d been looking for, but the time commitment means that this week’s discussion lies in earlier happenings.

The week before last, I played a new Commander variant for the first time. Watch the political intrigue thicken as you overlay a game of Bang!/Sanguo Sha on top of your Commander games. Each player gets a random role card loosely based on Mad Magazine‘s Spy Vs. Spy: 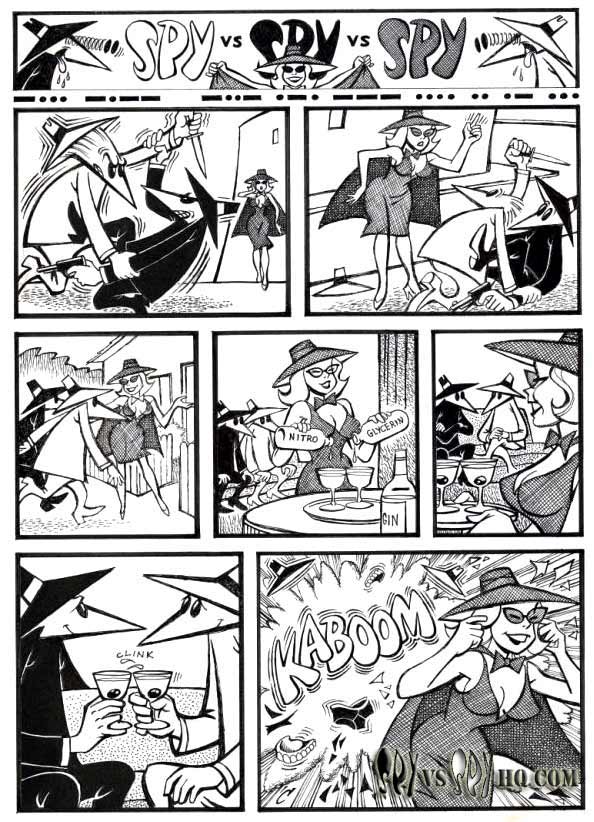 (Apparently this is a local variation on the Hidden Allies Format Abe Sargent discussed recently.)

What is the Meaning of this?

Variant formats offer a lot to your playgroup’s Commander experience. First and foremost, they offer, well, variance. Commander already does a good job of introducing extra variance into Magic games, but if your playgroup runs a lot of tutor effects or simply doesn’t play a very wide range of decks, you may be on the lookout for something more. Spies offers not only a different political dynamic via fixed alliances, but also introduces a sense of mystery and paranoia that doesn’t usually pervade Commander games.

On top of variance, many Commander variants can speed games up. Commander is notorious for four hour brawl sessions, and while those can be a lot of fun, oftentimes they’re simply too hard to make time for. Spies encourages attacking because you always have somebody who knows you’re an enemy (other revealed players if you’re revealed, other unrevealed players if you aren’t) who you can start gunning for. On top of that, it’s simply easier to end the game when you have fewer people to oust. 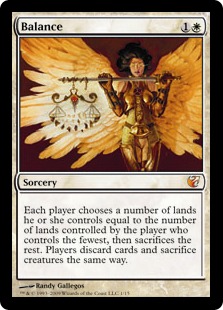 And finally we come to balance.

Variants can provide a way to balance Commander games involving decks of vastly different power levels. Spies doesn’t have a built in way to do this, but making the guy with the ridiculous combo deck play as a known lone wolf is certainly a start.

Not all formats can accommodate as large a variety of sizes as Spies, but with an even number of players, you can always go for X-Headed Giant. Unfortunately, taking simultaneous turns can get pretty annoying when they’re as complex as those found in Commander and doing so becomes basically impossible once you get into Mount Rushmore territory. On the other end of the spectrum, Two-Headed Giant has been a staple of Prereleases for quite a while now, and the reason is clear: it’s a great way to play cooperatively with a friend, with no fear of backstabbing.

In general, I think this is one of the few areas that Magic lacks in. As a kid, I remember always wanting to play Super Smash Bros. cooperatively with a friend against AI opponents. Competition is engaging and fun, but it’s also the way that people burn out playing Magic. X-Headed Giant doesn’t completely solve this problem because, as Paul Sottosanti pointed out in a great game design post, cooperative games need hidden information and banned communication and/or a timing component to keep them from being a single-player game.

Army of the Damned

Luckily, we have a better cooperative format right here on Quiet Speculation! If you missed Peter Knudson’s Horde Magic, now’s the time to read up, and if you follow him as @MTG_Pete, you’ll see he’s got more in the works. For those of you who refuse to click links, here’s a quick rundown.

I admit I have yet to play Horde Magic, but I’m not above theorycrafting so here goes nothing: fighting the horde gets rid of practically all of the bad blood one normally sees in multiplayer games. A strong deck doesn’t feel as unfair when it’s on your side, nobody can take an irrational vendetta against somebody they’re fighting alongside, and because the survivors share a life total you don’t even have the issue of a teammate letting you take a hit because they think their removal will be more useful elsewhere. Moreover, fighting with chainsaws should offer a sense of collaboration and camaraderie completely absent in normal games of Magic, making Horde Magic one of the most variant of variant formats. I can’t really say much about the variant’s speed without having played it, but I imagine it should take less time for four players to dish out eightyish damage to kill the Horde than the one-hundred and twenty damage it would take to beat the other three players in classic Commander.

Next up is an oldie but goodie. Star is played with five people, and each player’s goal is to eliminate the two players who aren’t adjacent to them. Oftentimes Star is played with five mono colored decks so that each color has to oppose its enemies, but the political underpinnings of having to eliminate people without letting you ‘allies’ win stays intact without this extra level of organization. Star plays out very differently depending on the level of politicking that your friends engage in. In apolitical groups, Star is a great way to avert hurt feelings because who each person is supposed to go after is established at the start. In more underhanded settings, the format entails trying to snipe wins out from under ‘allies’ who have killed your mutual enemy. In this setting, Star plays very much like a control mirror of old. You aren’t looking to throw out a bunch of strong plays, but rather to sneak something good enough through at some point by drawing attention elsewhere. Despite this sort of calculating play, Star goes a lot faster than a five player free-for-all because so many people are left alive at the end. Unfortunately, Star does little good in the realm of balance and can actually exacerbate the issue as often a powerful deck can kill off its enemies without the rest of the table’s actions being relevant. On that note, I’ve never been a fan of Attack Left/Right. It brings the same balance issues as Star but without any of the political intrigue. What’s more, in Commander limiting who you attack doesn’t even make a huge game manageable since targeting often has more impact than attacking. 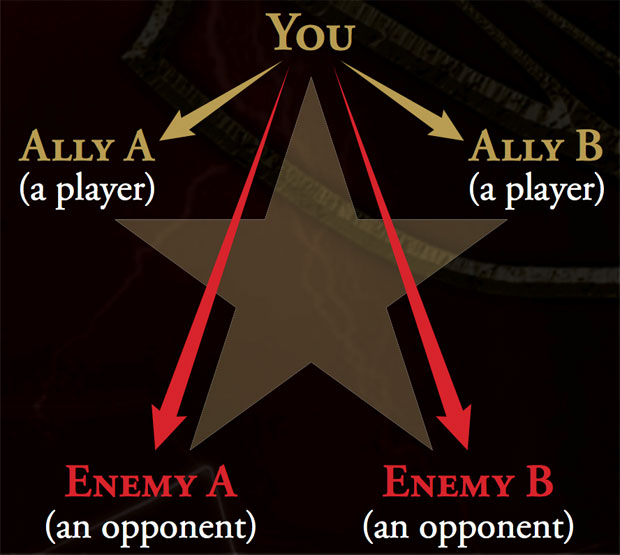 But what about instituting a range of influence so that Wraths don’t keep the game from progressing? While I know a fair number of people who play Range Commander when they get a big group, in my experience it always devolves into misunderstandings about what does or doesn’t effect who unless the rules are such that literally nothing outside of your range happens from your perspective. With that rule set you might as well just split into two games…

King of the Castle

Then again, ranges aren’t all bad. Emperor uses a limited range for a purpose that keeps it from feeling like separate games jammed together. It alleviates the issue that teams can cause where one person can’t hold off the combined assaults of the opposing team without combining each team into one ‘player’ like Two-Headed Giant. My biggest complaint about Emperor is that it can make Commander games take yet longer, but it’s a great way to spend an afternoon if you have five friends and want to avoid politics. The extra time and ability to outsource creatures to your teammates make it play fairly distinctly from your average Commander game (unless you play Zedruu a lot), and the teams’ ability to swap around creatures keeps weak decks from getting run over. Nonetheless, isolating the Emperors can lead to some balancing issues since the more powerful late-game deck will almost always hit a breaking point.

Then again, giving somebody the time to pull off their most ridiculous late-game can be as much a feature as a bug, and it’s one that last year’s Archenemy embraces wholeheartedly. The format works a little bit less well in Commander because the schemes have bigger fish to compete with, but this fact makes Archenemy a great way to knock the strongest deck at the table down a peg and get some revenge without pissing off whomever happens to be playing it. On the other hand, Archenemy might not feel as different from your normal Commander games as you’d like. After all, the table usually devolves into Archenemy as soon as some one drops an unanswered Memnarch or Necropotence. I’d recommend playing a supervillian role to keep things fresh and fun; after all, who doesn’t appreciate a good monologue?

To top it all off, let’s look back to the 2009’s summer multiplayer product: Planechase. The proposed gameplay with individualized planar decks was more or less a bust, but a shared planar deck can make for some exciting games, and with some careful selection, can serve to speed things up without making the outcome feel arbitrary. That said, the enormous amount of variance that a shared planar deck introduces can be oppressive, so if you want to break out your planes I’d recommend using the Eternities Map rules. If you do, you’ll still find a game of chaos, but there shouldn’t be any more moments that disappoint everyone at the table. The one downside is that by reducing the randomness’ role you give yet another advantage to whichever deck can generate the most mana, but the variant’s novelty is well worth it.

There are an endless number of ways to play Magic, and the vast majority of them can be applied to your Commander table. What are your favorite variants? Do any of the ones here sound interesting enough to try? Share in the comments!