I know this is something we may grumble to ourselves when we get paired against the Control deck, but it’s not something that we usually actually encounter.

Reddit comes through again, and in an odd subgame of finding the slowest possible way to win the game, they have determined a clear winner. In fact, there’s so much math involved in determining this, I won’t even try to understand that. I’ll just trust them.

I don’t even know what that means, but here’s the “combo.” The rules of the game basically involve a deck that cannot win the game except through its own power, in the slowest way possible, while playing against a brick wall.

The seven cards in the opening hand, that one will cast to win the game, are:

Dwell on the Past

Doomsday (we all knew it would probably involve this)

Magus of the Tabernacle 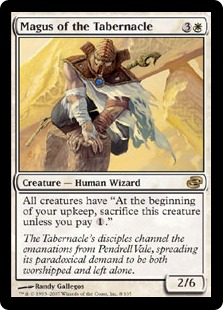 The secret to winning the slowest game possible.

In case you were curious how to win this slowly, here’s the full breakdown. Maths. Don’t say I didn’t warn you.