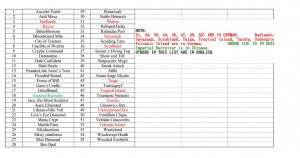 The first thing I want to stress is to not panic. We’ve had plenty of counterfeits hit the market before, and Magic hasn’t died yet. Instead, I want to simply bring this to your attention with a few tips for handling this.

First, as I said, don’t panic. While some of the flaws with the last run seem to have been fixed visually, odds are the materials these are printed on are the same. The first batch of Chinese counterfeits felt super fake to the touch, and I doubt these are much different.

The battle against counterfeiting is always ongoing, but as a community we’ve dealt with it before, and we’re equipped to deal with it again.

Facebook
« Conspiracy: Figuring out how to draft this thing.
Insider: Lessons from Vintage Masters »