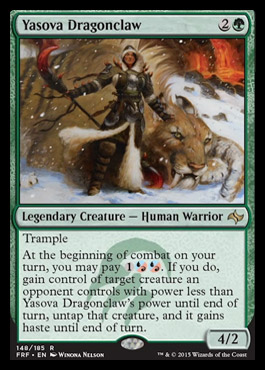 Yasova is pretty exciting. A very good casting cost to power ratio is the first thing to notice, and this aggressive rate couples very nicely with the triggered ability. Stealing one of their creatures and using it is a 2 point swing in your favor in the zero-sum game that is “number of creatures in play” and merely stealing a blocker to take it out of the mix is a good way to really deal them some serious damage. Taking a Courser of Kruphix and gaining a life and preventing them from blocking is likely a pretty common and pretty savage play.

Speaking of savage, with no work, Yasova triggers Ferocity on her own. Not bad for 3 mana. In this way, 4/2 is much, much better than 3/3 for the same mana.

EDH players will have noted that Yasova, despite being mono-green, is playable as a general which would put you in 3 colors due to the so-called “Memnarch rule” that states colors in the general’s text count toward color identity. Red and blue already have a lot of ways to take your opponent’s creatures, and building around threaten effects and sac outlets is solid. Your commander gives you a way to swipe a dude reliably and gives you access to green, which is something you really want to have access to in EDH. I could see building this quite a few ways, but a Voltron deck dedicated to dealing 21 commander damage seems best. You can jam some Illusionist’s Bracers and a Batterskull on Yasova and steal two creatures with power 7 or less. If you can’t kill someone under those conditions, you don’t WANT to win.

Financially, I don’t expect non-foil Yasova to be worth a ton. If you want to look for a price analog, I think Surrak Dragonclaw is probably the least we could expect price-wise given Yasova seems slightly more playable as a Temur commander. We’ll see if Yasova has a ridiculous presale price that is out of touch with reality the way Surrak did. Trade for foils at the prerelease before the foil price is established, if you can.

Facebook
« The Floor on Fetches
The Truth about MTGO? »