Listeners of Limited Resources, and more recently, Constructed Resources, know that the signoffs are one of the best parts of the shows. Started by Jon Loucks during his tenure at LR, the signoff tradition was continued in earnest by Brian Wong, who brought it week after week.

Luis Scott-Vargas has been an official member of LR for three episodes now, and though my predictions about his first cast were somewhat off—he played it really straight on that first episode—the puns and subtle jokes have ramped up significantly in the next two. You have to appreciate a guy who can be serious but subtly joke around in the exact same moment.

I did nail one prediction though (it was easy because it was very general and non-specific): “LSV will take up the signoff mantle, but with a new twist (like what?!).”

Rather than doing some kind of parody or comical signoff, Scott-Vargas seems to be transforming the segment into “Storytime with LSV.” With discussions so far on sportsmanship, the art of bad beat stories, and the origin of the running joke involving Marshall and monkeys, he’s taking things in a new direction that is perfect for his role within in the community. Of course, knowing him, I wouldn’t be surprised to get some more outrageous stuff as he grows as a podcaster. 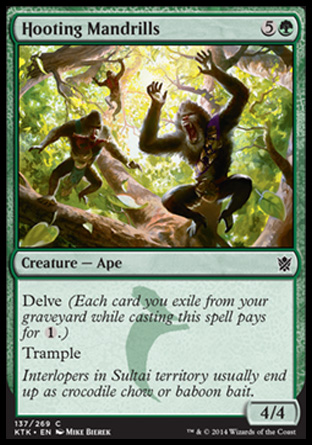 So that’s cool, but what I really want to draw attention to today is Jon Loucks’s signoff from episode 16 of Constructed Resources. Suffice to say, it is one of his best ever, partially because it’s funny, partially because it’s apt, but mostly because Loucks just left the MTGO team. The subtext you can read from that fact combined with the content of the sketch is pretty telling about why he may have left the company. I suggest you listen to the signoff here (it’s the last four minutes of the cast).

However, I am well aware that sometimes you just want to read on the internet and not bother with audio or video, so for those of you in that camp, I’ve taken the liberty of transcribing the signoff below. You will probably lose some of the comedic timing (and Marshall’s hysterical laughter in the background), but at least you don’t have to plug in your headphones. You’re welcome.

Okay, so I got this letter from Wizards…um…I’m just going to read it. Let’s see, the important part is, they say, “We’re seeking your skills as a voice actor to be used in a new Magic Online feature to help new players. We believe that spoken advice via a new planeswalker is the missing piece of the new-player experience, and will usher us into the new videogame age. If interested, please submit a voice sample recording the following generic phrases that would appear in the game. Please do not deviate from the script.”

Okay, consider this my submission, Wizards, for the new Magic Online feature with a planeswalker helping you out. Marshall’s done some voice work—I think I can do it, too. So:

“Welcome to Magic Online. You are about to embark on an incredible journey. Much like the journey I once took as a young planeswalker on the sprawling plane of Ragthamardia, a land of incredible beauty and savage wit-testing from which I finally escaped a hero, owing my life to the once-great Ufanza tribe, now left in ruin, for which I will one day exact my vengeance against the enemy we all fear to even face to face… Now click the play tab at the top of the screen with your computer mouse!”

“Try joining a draft. No, not that one, you idiot! You’ve already failed.”

“Now we wait for the eight. For Ragthamardia!”

“So, how are things? I wouldn’t join the LR clan if I were you. Marshall wouldn’t let me in, anyway.”

“Your draft fired 30 seconds ago! Get off Reddit and pick a card!”

“Mmm…not what I would have first picked.”

“Not sure I’m following your signals, planeswalker.”

“Actually, that uncommon was worth .4 tix.”

“Yeah, I’m totally sure fifteen lands will get us there this time.”

“My master in the Ufanza tribe would be very disappointed in you.”

“Easy mulligan—oh my God, how did you keep that?!”

“You should have played your Plains first because you’ve got a WW two-drop in your deck.”

“You know that not blocking is an option, right?”

“You have entered your attack phase, much like the time I attacked my enemy.”

“I would have attacked there, since your opponent respected the bluff two turns ago, so now you’ve got to keep it up. Sure, you lose if he has a removal spell, but you’re probably not winning that game anyway, and this at least gives you two more outs.”

“You’ll get there next time, planeswalker!”

“Don’t forget: you can always file for reimbursement.”