I’ve been basically pretty supportive of the Legacy Cube. I didn’t necessarily like the removal of the Swords of X & Y, but I understood the reason behind the change. Some of the additions were pretty sweet indeed.

Yesterday, MTGOnline.com published  a piece indicating new updates to the Legacy Cube. In short, we’ll just say these updates leave much to be desired. To get a little more into it: 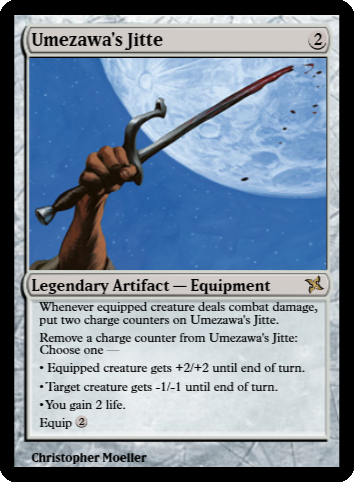 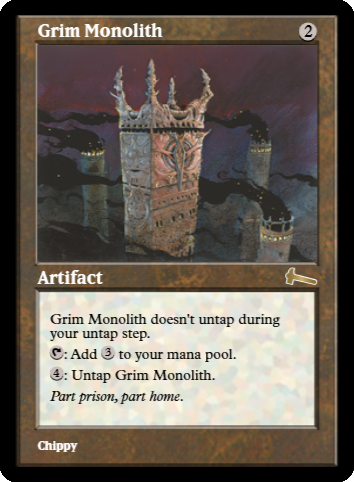 Umezawa’s Jitte and Grim Monolith were removed. This makes sense to the extent that swords and signets are not included in the list, and these two cards are as good or better than those. But as far as someone who likes to play with awesome cards, this is a feel-bad. I like seeing these cards in my pack when I’m drafting, and I don’t feel like they’re absolutely impossible to beat (difficult, to be sure, but not impossible). Having these cards in the format didn’t make it feel degenerate or unfair. They didn’t ruin my experience, but still, they’re being cut for power level. In Cube.

There are better changes: the self-mill reanimation theme was just bad, and they’re getting rid of Mulch, Grisly Salvange, and similar cards that never really got drafted. Did any of you ever see this deck run by anyone? I didn’t.

But then Buehler moved on to hurt one of my favorite weapons: mono red. These are some the cards that have been taken out of the format: Fireblast, Firedrinker Satyr, Searing Blaze, Searing Blood, Rakdos Cackler, Figure of Destiny, Shrine of Burning Rage, and Sulfuric Vortex. So basically, many of the coolest reasons to play mono-red. They took out Satyr but left in Jackal Pup? I realize the point is to weaken a deck that was a little too strong, but this seems like a little much. They removed some of red’s absolute best cards and replaced them with crap. 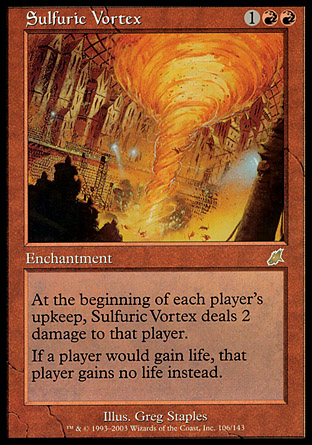 All of that pales in comparison to what they did to black. Black was indisputably pretty bad. Honestly, it was really, really bad. Instead of making it better, though, they made it worse, by including a vampire theme. Now we get great* cards like Vampire Interloper. I just can’t get on board with Buehler’s contention that this is more interesting in the format than Diregraf Ghoul, and really, so many of these additions seem bad. Vampire Nocturnus is just plain unexciting, but there are even worse inclusions: Necropolis Regent?! Ascendant Evincar?! (Interrobangs are intended and oh so appropriate here.)

I hope I’m wrong about black being worse, because the last thing we need is for the Legacy Cube to become even more unbalanced. These changes were ostensibly tested and found to be reasonable. But damn. If you thought black was unexciting before, just wait.

All in all, while there are plenty of changes that make a whole lot of sense, they’re also removing a good number of cards that should not be removed from cubes. This is especially true given some of the truly awful replacements.

Those are cards that need to be heavily justified to be removed from any cube list. Making it worse, besides new cards like Monastery Mentor and Crux of Fate, the cards being added are downright questionable. There’s very little exciting here, and there’s a few things that seem impossible to justify in what we would hope would be a cube made up cards that are actually good.

Some of those deserve more emphasis than others, but seriously, some of these cards weren’t even good in their actual Limited formats, much less in Cube. Some of these additions are downright insulting to those of us who view Cube as a format that should be continually increasing in power, not decreasing.

We’re losing Savannah Lions and getting Steppe Lynx. We’re losing Lifebane Zombie and getting freaking Dark Imposter in its place, to support some benign vampire theme that doesn’t even appear to be good. We’re losing Inferno Titan to Bogardan Hellkite, Plow Under (a premium disruption card for mono-green decks) to Scapeshift (why? Do they really think Valakut, the Molten Pinnacle will be a thing in a 40-card format? That’s pure craziness), and Figure of Destiny to Assemble the Legion. Form of the Dragon will never be cast by anyone, WOTC! What are you doing?! These changes are among the worst I’ve seen since Cube came to MTGO. If development on the Legacy Cube is just going to be mailed in like this, the playerbase is going to lose its interest in playing it. As we power down the Legacy Cube, it becomes closer and closer to a Limited format, and that is not why people like or play the format.

I’ve been seriously ready for Cube to makes its reappearance on MTGO, but all my excitement over the announced March 14 return has been completely deflated by these updates. Here’s the fundamental problem with what WOTC has done: they’ve decided to power down certain decks to even out the metagame. What would have been better, you ask? How about powering up the other decks so they could compete? Nobody wants to play with worse cards, and though we’ll never actually get this information, my guess would be this will be least played (and thus least profitable) Cube iteration since the formats’s introduction to Magic Online. At least I hope that’s the case. If updates continue heading in the “make cards worse” direction, I don’t know how much longer I will remain an MTGO Cube Addict™. Cube is the only thing that gets me to sign in to my MTGO account. It’s bad that this announcement hasn’t gotten me excited to log on.

What do you think? Am I way off base or are these changes just ridiculous? Sound off below.