Well, this is a nice contrast to these kooky sell-side spikes.  This is the kind of MTG Finance game I like to play.  I chose this chart because it represents a few interesting things.

First, you’ll notice that in advance of the January 2015 run-up, Urborg, Tomb of Yawgmoth had remained basically stable on the sell side, but there was a lot of action on the buy side, with both the average price and the top price moving quite a bit under the surface.  Signals of a potential increase showed in early November, late December and early January.

The nature of buylists is such that these quick run-ups followed by a flat-line happen when a merchant ratchets up their offer to fill inventory, and then removes or greatly reduces their offer once they have filled their stock. Seeing this happen three times in as many months was probably a good signal that there were things to come. 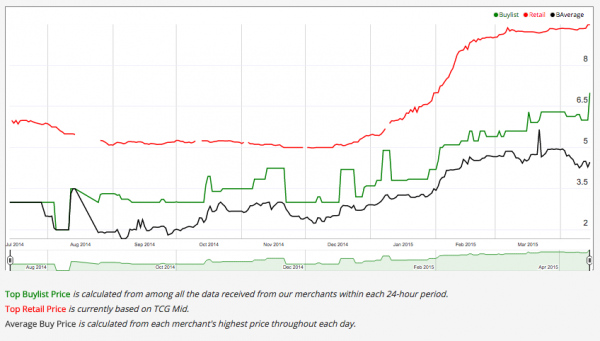 Second, the sell side surge was matched proportionally by a buylist increase.  Of course, it’s never truly 1::1; buylists tend to be a little more docile in their movement than retail (because we all know retail pricing is a guessing game of wishful thinking).  Regardless, if you bought in at around $5 retail, you’d already be in the black by about a buck by now.  Chances are you didn’t pay retail for them, though (and if you did, maybe you want to think about a QS Insider sub).

Third, take a look at the rather substantial buy side bump in the last couple of days, despite the lack of retail movement.  It looks like the sell side is starting to wiggle a little, so it remains to be seen if it will keep up.  As we’ve discussed, a buy increase often predicts a sell increase, but it’s not 100%.  We shall see!

I’m curious to see what everyone thinks also because I have no clue I this one. If the price were based on sales from my store the card would be half the price, not steadily increasing. Could it just be the low supply of m15?

Urborg’s growth is likely due to several factors. Being an M15 rare, there will be far fewer of them compared to rares from most of the other standard legal sets on the back of the fact that core set sales tend to usually fall below that of regular block set sales. Compound this with the fact that it was a $30-$35 card prior to the M15 printing so it has a very high price memory and clearly had a lot of casual demand. Lastly, we look at the strength of black as a color in the current standard environment.

Of the top tier decks in standard currently, (Abzan Aggro, Abzan Control, Abzan Midrange, U/B Control, Esper Control) about 70% are playing black (the exceptions being G/R Dragons and Mono-red/Atarka Red), Urborg turns all non-swamp basics into their respective dual lands, it turns non-black temples into tri-lands with upside, and it even turns fetchlands into mana sources (for those times when you run out of basics to fetch with them). All 3 reasons are likely contributing to it’s continual rise. I know I have run at least 1 copy in every standard deck with black in it that I’ve played since M15’s release (though I did not run mono-black devotion as it would have been pointless in that one).