If you missed it, Magic Online made a pretty big announcement this week. Like nearly every change that has ever happened to Magic– online or otherwise- there has been a loud, negative response. In fact, many players seem to be selling out of Magic Online, as evidenced by this: 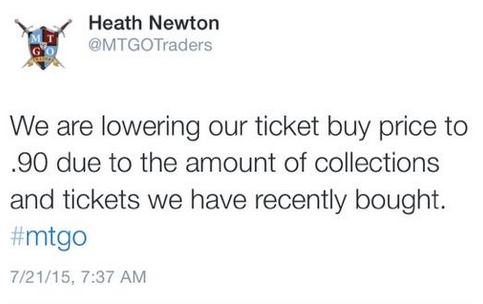 With fewer packs being awarded as prizes and Play Points being non-transferable, this is being heralded as a death knell for those who grind MTGO for profit beyond just playing infinite- if this was even a reasonable thing to attempt doing given the recent MTGO economy.

The negative feedback seems to come mostly from constructed players. With so little of the prize pool being trade-able, acquiring new cards by playing constructed is quite difficult. Alternatively, players who only use MTGO to draft don’t seem to be impacted at all.

As somebody who uses MTGO for some constructed and periodic drafts, these changes actually appear good to me, and by this I mean for the type of experience that I derive from MTGO. I like MTGO for testing Modern, and mostly only play brews in Standard. This structure allows me to play more games with a smaller investment. This is clearly not the case if you’re buying a lot of new cards, so again, there’s definite downside when it comes to grinding and building decks if you’re not using MTGO to draft.

Now, if you’re into Daily Events, this change is ostensibly terrible. There’s very little incentive to play a Daily Event with the increase in entry fee with what is decidedly poor prize support. Daily Events haven’t worked with my schedule for some time, so again, this doesn’t effect me but I can see where that would upset others.

I do think that being able to use Play Points to draft is great, and this looks to address the concern of low pack prices. Of course, the counter to that is that constructed players will just have fewer packs. I would like to see some manner of Play Point redemption introduced so that it’s not just impossible to cash out, but I stand by that these changes are good with the goal of just using the client to play.

A link for providing feedback is provided in Lee’s announcement, and I recommend contacting WotC through that medium instead of decrying that the sky is falling.