Scars of Mirrodin launches in a month (October 1st, to be specific) and it is supposed to be packed full of excellent artifacts. We know scant little about this set at this time, but we can gather a few clues, put them together and then get a good idea of what to speculate on.

First, let’s look at the SOM plant from M11, Steel Overseer. It’s the artifact “lord” that distributes +1/+1 counters to all of its friends. From this, I predict a lot of small artifact creatures that are worth pumping up, and possibly a legit strategy from it. I also anticipate that +1/+1 counters are going to be relevant. For example, we have cards like Triskelion in Standard; I predict more to come along. We could see cards in the vein of Etched Oracle, too. If these cards end up mattering, we should be thinking about what already exists that benefits from these counters. Trike comes to mind, of course, but it is already heavily printed and highly unlikely to be relevant in constructed formats (unless they reprint Mishra’s Workshop…). Absent Sunburst coming back and bringing Etched Oracle with it, we probably cannot make much from the counters themselves. [Let’s not forget the Proliferate ability on Contagion Clasp that spreads all kinds of counters! –kbr]

However, we have an incredible engine that creates these counters, a tournament superstar that can come back again to sling piles of +1/+1 counters onto any of its artifact buddies.  I’m talking about Arcbound Ravager.

Ravager is only legal in Vintage and Legacy, but both formats have an abundance of cheap artifacts. If we see a playable artifact creature that utilizes these counters, Ravager is the best way to make it come alive. Think about a card that says something to the effect of “if this has 8 +1/+1 counters on it, [do something cool].” Take another turn? Double its counters? Putting together a pile of counters on your Ravager is relatively simple, and it can pass them along with its Modular ability.
There is a high chance we will see something, across three sets, that makes the counters good, so I suggest trading for them and even shelling out cash for them if you have some in your slush fund to spend. MOTL has the finished Ebay prices hovering near $8, which is a lot to spend on a card that isn’t seeing play… yet. That said, it’s at a neutral price right now – the value is not affected by any “noise trading” that would drive its price up due to speculation. If you can snag them this week or the next at $8, you’ll be setting up a solid investment that isn’t going to go down in price. If, on the unlikely chance that it doesn’t get bumped up from SOM, you can clear them out for what you paid on them. 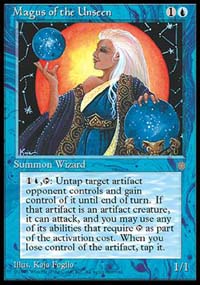 Fifty Cents to be exact.

Anticipating that we’ll see artifacts pop up more in Eternal formats thanks to SOM, I see another old hit popping up, too. It’s a rare from Ice Age that has seen some attention in Vintage, thanks to its power at fighting Time Vault. Magus of the Unseen can take your opponent’s best tools and ram them back at him. Again, if a predominantly artifact-based deck pops up in an Eternal format, Magus is a good way for decks like Noble Fish and others to battle. Magus of the Unseen costs approximately nothing, and I would be comfortable getting a dozen copies in the case that the Magus becomes relevant.

We have also seen the Sword of Body and Mind spoiler in From The Vault: Relics, which hints at the extension and conclusion of the enemy-color Sword cycle in SOM. We are guaranteed some good equipment, and though I know we won’t see another Jitte, we could easily see another Basilisk Collar. The best way to dig up Equipment in Standard at the moment is Stoneforge Mystic. We could even see big pieces of equipment that are worth cheating out with its second ability (which, to date, has been used a total of twice in the history of its printing).

The “Stone-Blade Mystic ‘is currently at $3.50 on MOTL. That’s a fine price to pick up some anticipation copies, knowing that it could easily double in price if there is a piece of equipment worth grabbing. Ranger of Eos, for example, fluctuated by six dollars or more during its run in Standard and Extended, and Stoneforge seems to have the same erratic behavior. It is a splashable card and I see it being played in Standard and probably Double Standard, when that format becomes a Real Thing. You can also count on casual players to demand easy ways to get their goofy, huge equipment into play. My call is that you should pick up Mystics up to $4 and dump them if they go past $6. They are a medium-term hold. That is to say, I would hold them for about 4 months, so we can see at least two sets of SOM; if they have not taken off by then, dump them if you need the cash, or hold onto them if you can afford to so you can capitalize off of the third SOM set if there is something juicy in it. If SOM doesn’t make Stoneforges take off, they won’t drop in price by much, but there will not really be a good reason to hold onto them at that point.

All we have to go on regarding SOM is a few little teasers; as we know more, we will find more cards to mix them with. I’ve given you a few fish today, but I also want to leave you with some fishing techniques. First off, make sure to check magicthegathering.com at midnight, every night, if you can once spoilers are revealed. If you do not have diehard friends who are also checking and figuring out combos, check on the followup discussion threads (and watch @quietspec on Twitter!) to see if there are any worthwhile combo interactions. Periodically, check MTGSalvation for posted cards on the SOM spoiler. It’s worth dropping by the Rumor Mill on the forums; though the cards are unsubstantiated and you can be burned on rumors, you can sometimes find cards that end up working out with cheap, existing cards.

Finally, some quick hits that might turn out to be good with another artifact block: Thada Adel, Acquisitor can yank out opponents’ artifacts and equipment, exiling them even if you don’t want to use them yourself. Stonehewer Giant is legal in Extended and can fetch up a whole pile of goodies. Two more fish for you!
-Doug Linn