The science behind this is that if something is low-risk, more people will want it; they are unlikely to lose their money, and they stand to gain a little bit in the process. When you talk about loaning $10,000 to your cousin who says he can make auto engines run on water, though, people aren’t exactly lining up at the door to throw money at his invention. If it works (big if there), then you change the way humanity approaches energy. If it fails, you’re out $10k.

Knowing this, you can create your spectrum of risk that shows how interested you are in giving that pile of Franklins to your cousin instead of investing in toothpaste manufacturers. Much like stocks, there are Magic cards that are low-risk and high-risk, and luckily, our risks are much lower because, apart from bannings, our market does not crater card prices all that often.

The “Blue Chip” Stocks of Magic
The phrase “blue chip stock” traces back to the 1920s, when a stock trader noticed several stocks coming over the ticker that fetched prices of $200 or more. Thinking of these as the high-value chips in poker, he referred to them as “blue chip stocks” to his superior, and a robust market term was coined. Though the phrase originally meant high-dollar stocks, it now has come to mean high-quality stocks. These are the gainers, the market titans that make you more money year after year and, based on their size and bankroll, are less subject to negative fluctuations than other stocks are. 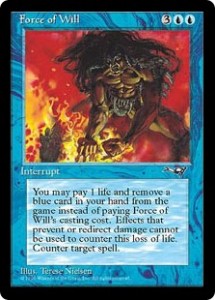 Pitch a Blue card, pay one life, counter your spell?

We have blue chip cards in Magic, too. The best example is dual lands, and the next is Force of Will. These two jockey next to each other because they have a huge appeal and they will never be reprinted. If you pull up the data, you will see that duals and Force of Will have both consistently gained over the past year, especially with the reprinting loophole closed that extinguished hope for more of these cards hitting the market. If I had to name a third, Wasteland is probably it. It’s a card that always gets play as a 4-of and sees use in both Eternal formats. Wasteland has gained at least $10 over the last year and it will not drop below that, barring reprinting in significant quantities.

You can make blue chips work for your portfolio because they will retain a lot of value for the collection. Even if you chose some clunkers to speculate on, the slow gains of your dual lands, Force of Wills and Wastelands will iron out those errors eventually. We’ll talk more about portfolio assembly later in the article.

Some iconic, role-playing cards demonstrate few gains. Demonic Tutor costs about the same for a Revised copy as it did when I was saving up my allowance money for one. Sol Ring, despite being the iconic card of EDH, is still very reasonably priced. When you are looking for blue chip cards, think of ones that you need four copies of to work well. If that card performs in both Eternal formats, all the better! The second-tier blue chip level definitely includes blue fetchlands, for example. The Holy Grail would be a card that was both played in Eternal and Extended, but with Extended getting chopped down, I doubt we’ll see something that fits that role; one requirement of the blue chip cards is that they are sufficiently out of print to be valuable without the threat of new printings.

On the other end of the spectrum, we have the penny stocks and junk bonds. In the financial world, these represent companies so saddled with debt that it is unlikely that they will ever pay you off on your investment. However, if they do develop, they promise great returns. Many pharmaceutical companies, small-time ones founded by a chemist and her partner and relying on a single patent, operate this way. They may never get FDA approval for their patent, but if they do, man oh man do you have a payday if you hold their stock! These assets tend to be inexpensive to buy, as well. 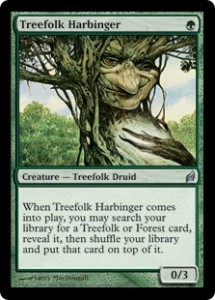 Look at that smile. He knew all along.

In Magic, any card that does not see play, but could potentially really take off, could be considered a junk bond card. Think about old, rare cards that do not command much of a premium. Grove of the Burnwillows is the A+ amazing example of this. You had a card that was worth fifty cents jump up to five dollars in the span of a weekend! The downside, though, is how many junkers do you have to have before you have a Grove scenario? When you are considering collecting, I definitely think it’s worthwhile to pick up some of these cards that have potential, especially since you can find them in Constructed formats all over. They are some of the hardest-to-call cards there are; if you didn’t get the line on Doran at Amsterdam, you didn’t know that Treefolk Harbingers would reach four euro at the event site!

There is a third category of cards that comprises those cards that are worth a few dollars now, but can pick up a lot of steam if they get popular. Think of Knight of the Reliquary and Stoneforge Mystic, for example. They went from three dollars to over eight in short spans, due to being very popular at the time. Another example – Grim Monolith. It’s gone from $4 to over $25 (though few people are jumping at that price), and Power Artifact has flirted with $40, from $11 before.

These are all great to talk about in hindsight, but that does no good for our future. The big problem with buying up these cards is that they tie up a lot of your money in cards that may never take off. For example, I am keeping an eye on Transmute Artifact, but I’ve been doing that for five years now and there has never been a great time to jump on it. I don’t know if there ever will be, for that matter. But, if Transmute Artifact takes off, you could see it pushing $50! That’s a big “if,” and I don’t think many of our readers can stand to put much of their bankroll into these cards unless they have a good hunch.

That said, these cards consistently give you the greatest return on your investment. You need to put some money behind it, so as Biggie Smalls says, this is strictly for live men, not for freshmen. If your cards are not improving by an amount you are happy with in the timeframe you want them to, fire them and buy more instead. There’s no use clinging to some cards for hope when you could turn that stack of cash into something else that might actually move! 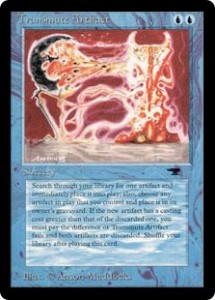 Hey, it could happen.

An interesting quirk about investment portfolios, or card collections, is that you can reduce the risk on your portfolio by diversifying it. For example, if Fur Coats Unlimited does great in boom times but plummets during recessions, I might want to balance it with stocks in Colbert Bootstraps Inc., which does the opposite. If they are perfectly correlated, I will get the same return no matter what the market is doing. The more stocks you add, the lower your risk becomes in proportion to the same amount of return. The optimal number usually works out to about thirty stocks before you plateau on the advantages of diversification in the stock market.

It’s mathematically simple to set up portfolios on the stock market and people spend their entire lives guessing the risk of a stock and then trying to balance it out. There are efficient frontiers on curves and calculus to wrangle with, but for now, just know that you can stand to do better with your collection if you snag some blue chips, some junk bonds and some big gainers. It’s up to you to set the proportions on this, but I personally wouldn’t put more than 10% of my bankroll into highly volatile picks. You can balance out that 10% loss, if it happens, with your blue chip gainers.

You can fold this theory into your trading as well, and you probably already do it to an extent. People value their Wastelands and Aether Vials more than they value the same amount of money represented in bulk rares, because those cards have a steady value and good liquidity. People undervalue bulk because they don’t realize that some cards can really take off. To that end, try for the bulk trash throw-in every time. Making a diversified collection means your bankroll gets a higher reward for less risk, and it is really the only way that we can try to buck that iron law of investment that we read at the beginning.

Facebook
« #followfriday: Read Into It
The State of Your Wallet »