Hey all, and welcome back to Whinston’s Whisdom on Quietspeculation.com. this week, we’ve got a bunch of from this week’s FNM. However, as I’m writing this article the day before States, I can’t give you any information on that unfortunately. But rest assured that next week’s article will be chock full of States goodness.

This week introduced a new development for me. Two other players, Hans and John, who are planning to open a store of their own as a hired trader took me on. They supply the cards, I supply the trading, and I get 30% commission of my profits. This is especially useful for me because I don’t need to invest a large amount of my own liquid assets in trading stocks, and while it does reduce my profits, it also drastically reduces my costs. So that’s what most of the trades in this article will be, me trading on behalf of these two players, though I will distinguish between ones where it’s my trade stock vs. theirs. Finally, we have our very first Pack to Power trade and the definition of the rules.

Trades for Hans and John: 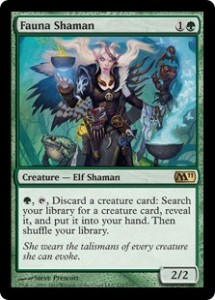 A nice way to start the night. I had thought this trade was much more even because I thought Iona was still at $10 apiece, but thankfully it’s dropped considerably. I essentially traded off Mythics with casual and Eternal appeal for some great Standard cards, which I should be able to move at States.

Once again, I made a big trade with some mid price Mythics. While not as expensive as Planeswalkers, Eldrazi Monument is one of the more valuable Mythics in print, comparable to Lotus Cobra and Wurmcoil Engine. At the moment, it seems like everyone is trying to get their hands on Monuments, but nobody has any for trade, making them much more valuable. My big gains from this trade came from valuing Mystics at $3.5, Kozilek at $5 (another mid-range Mythic that is often under priced), the Lords at $2, and Wurmcoil at $15. I slightly overvalued the Sun Titan, trading for him at the regular price of $8 rather than the promo price of $6, but I still made a good chunk of change on this trade.

I really messed up here. Both of use valued the Archdruid at $2, and I had no idea it was worth so much. I suppose with Elf Combo in older formats and Monument Green in Standard, it might be getting a price boost, but I never expected anything this expensive. Hopefully I’ll be able to capitalize on this during States to find some others who undervalue it.

I’m perfectly willing to take a slight loss here. 3 cards that see no play for one archetype staple? Sounds fair to me! 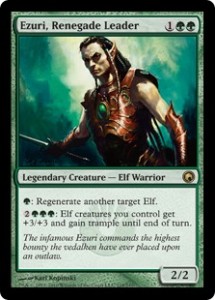 Another trade where the net loss doesn’t accurately reflect the value of a trade. Frankly, Drowned Catacombs sucks. Black is the worst color in Standard right now, and if it does see play, its’ certainly not getting paired with Blue. I valued the Catacombs at $2 during the trade, and I wouldn’t even change that now that I know differently. They are just not playable, and don’t trade for them at any more than $3.

Just an article full of textbook cases today! Here, we’re swapping some very narrow cards for ones that see significantly more play. While Foil Ezuri might be a casual player’s dream pull, you’re not going to get much from tournament players for it. As such, I was perfectly willing to value it at $6 in return for getting Linvala at $7. Linvala should be seeing universal sideboard play as an answer to mana accelerants, as well as techy guys like Cunning Sparkmage. Terastodon is also played in Eldrazi Ramp sideboards for the mirror.

And now, on to…Pack to Power

1)   All trades must be personal trades, with other players, for cards. No trading for store credit or cash. No MOTL or Ebay. Just good old fashioned swapping of cards

2)   I will be attempting to go for the cheapest Mox, Mox Pearl

3)   Not setting a deadline at the moment, but I may later on depending on how the project goes.

4)   We’ll be using Starcitygames.com pricing for all the cards

And with that, my very first Pack to Power Trade (you can see the contents of the pack in last week’s article)

Stoneforge Mystic (sold out at 6, estimate 7)

Not a bad start at all! Ratchet Bomb is seeing a decent amount of play in UW Control and Eldrazi Ramp decks, and should be holding a steady price. But a steady price is not what we want for our Pack to Power binder. Instead, we picked up a different U/W card, Celestial Colonnade, as well as a Stoneforge Mystic, which is seeing a ton of action in White based aggro decks. Finally, we got a Lux Cannon. While not immediately appearing very playable, there have been multiple control decklists floating around, both mono Red and UW, using Proliferate alongside Lux Cannon and Voltaic Key. Lux Cannon also gains value from being a casual favorite. Because it has a lot of potential to skyrocket, Lux Cannon was a good pick for me, as I’ll be able to trade it off for 50+% profit to someone who really needs it.

I should have plenty more of these for you next week after I’ve been able to play and trade at some bigger events, but meanwhile, I hope you all enjoyed your States tournaments, and check back again next week for more trading goodness.

Running out of envelopes to ship cards in,