As traders looking to expand our bargaining turf, we have to worry about Public Relations a bit more than the usual person who looks to trade at his or her convenience. Were trying to build our own little empire of cardboard, people, and trading. I would even say that we are the step between trade table grinder and shop owner.

Most of us don’t have the capital or stock to open up our own shop, our very own Kelly Reid notwithstanding, but we are looking to be more than another fish in the pond, or shark in the ocean as the case may be. Because of this, we need to express concern about the character we portray just as much as the shopkeeper; after all, we have our reputation as well.

If you manage to pick up a bad reputation in the areas you’re attempting to expand into, even the most casual player will scoff at your attempts to make a deal. Your time and energy is just as important as the next player, so how do traders ensure a good image? It’s easy enough to start off in the right direction, but it’s even easier for you to tarnish your image before you even make your first trade in a new area. We have you covered. 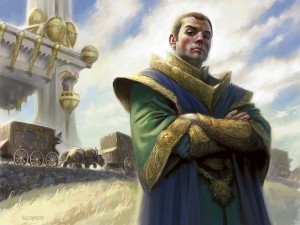 Things to not do

For some of us this list may seem like common sense, but sometimes people forget how to behave socially in their own atmosphere. With that in mind, I will continue to touch on the philosophy of expanding your trading region, building your reputation, and hopefully helping some people develop into stronger traders, and better people.

Feedback encouraged, if I need to go into more detail in some areas, or you have a specific question, let me know!

Remember, karma comes around, do something nice this week at your LGS,

Stephen Moss currently lives in Lancaster, CA, is a usual PTQ grinder in the southwest region and working on his Masters in Business Administration. He has an obsession with playing League of Legends when not working on articles or school work. His articles often take on a business minded tone, and usually contain information applicable to magic trading as well as real world business.