There are a ton of reprints in Conspiracy. I’m interested in the new cards. I don’t need to tell you that Squirrel Nest is good in Limited. Let’s take a look at new stuff.

Today, I’ll go through the Conspiracies. 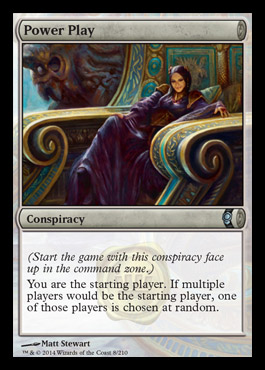 I don’t know what this card does. Does this mean you start the game? Hooray, I guess? You waste a draft pick on starting the game… unless someone else has a Power Play. Does this mean you are the starting player for voting effects as well? Either way, this seems weak. Not going to take this highly unless it does something better that I’m imagining. I have no idea if Conspiracy cards will be relevant financially. Planechase planes and Archenemy schemes are about a buck each. These will have a much higher distribution than those. 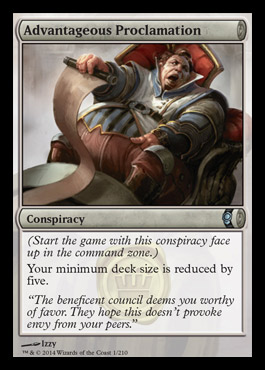 I. Love. This. Conspiracy. A 35 card deck is a big advantage. I don’t see any mill enablers in the set yet so this is just going to give you a 12% more consistent deck. This is very, very strong. Imagine you could take the 4 worst cards out of a draft deck and chop a land off. I think this is very strong. 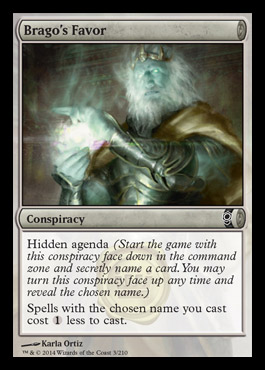 No wonder this is common. This effect is very weak, and the fact that it’s a 1-shot makes it weaker. The fact that you can bluff it being a better Conspiracy with Hidden Agenda is the best thing it has going for it. Last pickable. 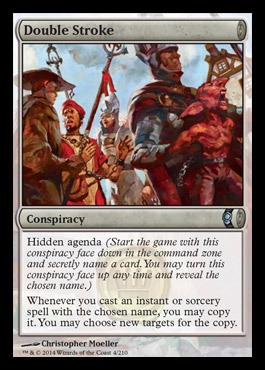 This is the kind of Hidden Agenda you’re trying to bluff when you put out a Brago’s Favor. Double Stroke is very, very good. This card can win you a game. How would you like to copy Mortify? Extract from Darkness? Swords to Plowshares? Tragic Slip? Copy away. This card can be played effectively in a deck with 1 instant or sorcery it’s so good. Such a ridiculous power level swing between conspiracies so far… 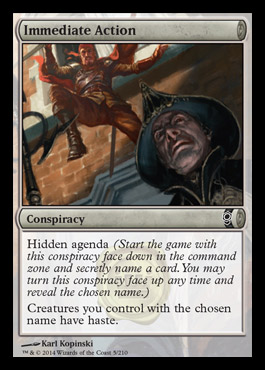 All of the Conspiracies at common seem like they should be rated “why bother?” and this feels like no exception. It’s a stronger effect than Brago’s Favor, but it’s still a 1-shot and I’m not really impressed. Giving a Spiritmonger haste can be good. It can even win a game. Still, I’m not predicting this makes many waves. 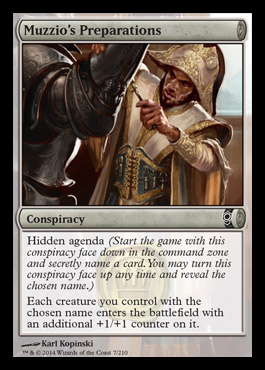 This is solid. . Nope! As Aric West points out below, reading just the bottom where it says “each creature you control with the chosen name” gives an incomplete picture of the card’s true limitations. It’s oly by reading above in the Hidden Agenda text that you’ll see you declare a card name not a creature name. And the narrow get narrower… It doesn’t have to be a 1-shot effect if you build with this card in mind. Howling Wolf suddenly becomes a much better pick, for example. It takes work to make this card mediocre, but I would play tokens in this format if I got the right cards, and if you build tokens, you don’t not play this. 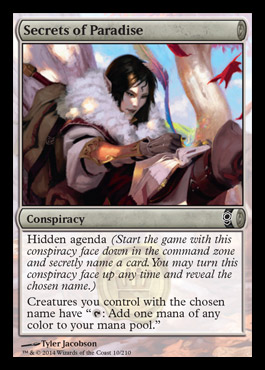 This has real potential. I don’t see anything silly like Horseshose Crab to abuse with this right away, but it has the potential to be more than just a “name a creature with defender” sort of card.  (in fact none of them are good with Squirrel Nest) – and there has to be more to it than that (no apparently there does not). This has potential for abuse beyond some of the other cards, so I  could see new cards making this more attractive. 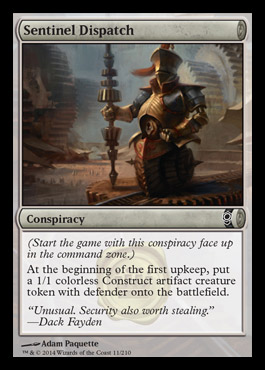 I guess it depends on whether this set has Burning Shoal, right? This seems underpowered for a 1-shot effect, but I like it more than some of the other common ones. 1 sentinel 1 time seems under-powered, but some decks might really want a free chump. Whether they’ll want it more than they want to double a Brainstorm remains to be seen. This is better than not having a Conspiracy and in a lot of decks, I like it more than Immediate Action.