The full spoiler is now up, and some of the cards bear discussion and some will warrant their own entry. Painting with broad strokes for now, let’s get through the relevant bits from the last of the spoiler. 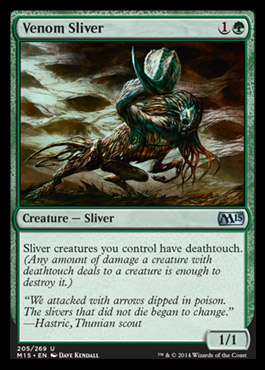 Deathtouch seems like a really odd ability. Since all of your slivers grant other slivers abilities, you’re less inclined to trade creatures since it will deprive the survivors of abilities. Will making the creatures trade more often make you more or less competitive? M15 limited isn’t deep enough to run slivers and if you’re making a Standard slivers deck, you’re jammed at 2 mana and won’t run more than like 1 of these, probably in the board for odd situations. As a meathooks devotee, I’m not stoked about this guy at all. I realize trading is good, and if you have a sliver that grants first strike or has the Goblin Medic ability, this is nutty. Worst case in M15 limited he’s a slightly more expensive Sedge Scorpion who has a non-zero amount of upside if you get other slivers. 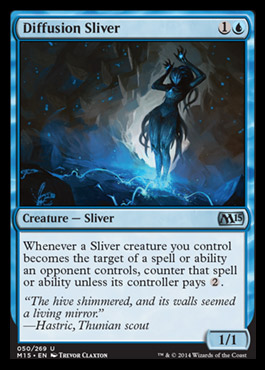 But why fish for nice things to say about that sliver when we can just salivate over this one. Crystalline Sliver it ain’t, but frost armor is a spicy ability and I’ll sure take it. It doesn’t help us be less jammed at 2 mana, but this is an ability I want to devote maindeck space to. Aether Vial would make this deck so good in Standard and make the 2 mana logjam irrelevant. It would also likely make the rest of standard super annoying. 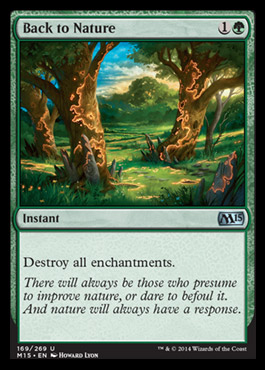 Seriously? What? I am literally baffled. This basically punishes people for playing interesting cards from Theros block and rewards them for playing gods, which are durdly. I really can’t see the rationale behind printing this in the core set. I hate, hate, hate this printing. 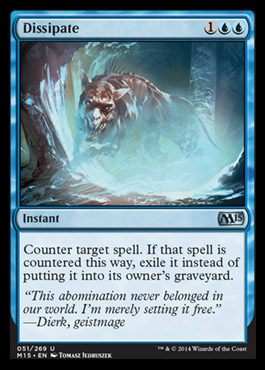 This I can get behind, though. With the cycle of uncounterable spells leaving soon, we need counterspells again, and having a decent one never killed anyone. 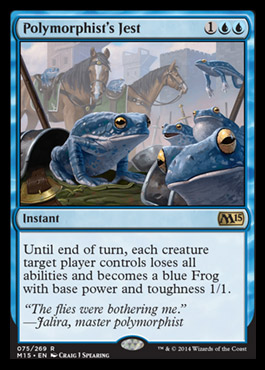 This is another one in a long line of blue spells that look good but compete with each other for the same slot and are hard to gauge in 2 dimensions. Will this get run? Whelming Wave? Aetherspouts? Or are none of those as good as just jamming white for wrath effects? Curse of the Swine was more popular than I’d anticipated in EDH and that is still a bulk rare, so I feel like that speaks volumes about a card I expect to see equal adoption at best. What’s more likely is that this sees far, far less play than a bulk rare, which bodes poorly for it to say the least.

Could this be the removal white wants? I’m scooping these out of draft leavings in any case; I’ve had situations where I got $5 in trade for playsets of commons like this the first week before an event started. This seems sideboardy, but it also seems like it can solve a lot of problems, namely gods and artifact creatures that deal a lot of damage if they die. 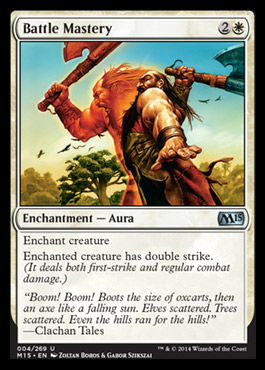 Naya Hexproof has a lot of gas in the set. I wasn’t sure if the deck wanted to pay 5 for Spectra Ward, but I am sure they want to pay 3 for Battle Mastery which lets them run more hexproof creatures and lets them lean less heavily on a risky card like Fencing Ace. This could spell upside for hexproof cards and other staples in the Naya hexproof deck which were tailing off but could see renewed interest in the lame duck months of the current standard. I’m not saying buy, I’m saying you have some stability to sell into.

All in all this set looks gassy, and there is financial opportunity here.

I would take a look at which decks these new cards allow and move accordingly. I think people will want to give hexproof one last hurrah, I think a M14-M15 slivers deck is going to be attempted by tons of people including yours truly giving you a crack at outing M14 slivers on a high note and causing interest in Mana Confluence to be heightened even more. Get those M14 slivers like Bonescythe Sliver off of the books while people still care, but don’t fret if you’re holding the bag, either. Long-term interest in slivers is totally a thing. Galerider has cross-applicability given its (narrow) usage in some mono-blue builds.