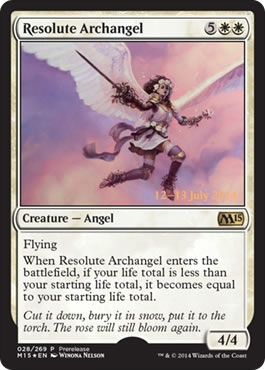 The definition of frustrating.

I don’t know about you, but seeing this thing come down across the table from me was pretty tilting. Maybe the first it was cool, but the second and third time in a single game were not. And in my second flight, the black promo was played on Turn 5 five games in a row against me.

Anyway, this post is brought on by this one I saw on social media today. I think the Guild Pacts in Ravnica were really fun and flavorful, and even the promos were kind of cool in that regard, though Grove of the Guardian was still kind of OP. Anyway, at least it made some flavor sense. It makes no such sense in Magic 2015, and was mostly just frustrating.

Because people have guaranteed bombs. Games aren’t about gaining incremental advantages or choosing to adapt to your opponent’s deck. Instead, everyone has guaranteed bombs and you just hope to play yours first. We had numerous games at the LGS go to time, and the card above is the primary culprit.

Not to mention that, as someone who spent the weekend actually running the events, it kind of sucks to have dozens of Red and Blue boxes left and none of the others, and at the last event people didn’t get to play the color they wanted. All of this is not worth the benefit it provides to players. I actually think seeded packs are a decent idea, though worse now than they were when WOTC was pushing Guilds, but prerelease promos are not the kind of Sealed I want to be playing.

Anyway, that’s my (frustrated) opinion. What did you all think?