Happy (semi-early) birthday to us! It was one year ago to the week we made our debut as "Masters of Modern" on Reddit and other social media. It was also one year ago to the week that our readers took a chance on a couple of relatively no-name Magic players and their vision of a Modern site for Modern players. Our name might have quickly changed, but our promise to deliver high-quality, data-driven, Modern-specific content has continued to be the core of our site's purpose since last year. Some of you played Magic through school as an escape from classes and tests. Here at Modern Nexus, I'm proud to say we will never let you escape the statistics, tables, and evidence-based analyses you have come to expect. 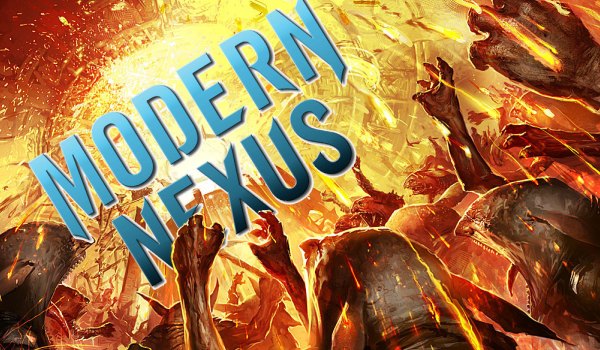 March 16 of 2015 saw us publish our first "Metagame Breakdown" article, and I'd like to hope the ideas of Tier 1, Tier 2, and Magic metagame analysis have never quite been the same. Today, I want to not only thank our readers and community for all your support and participation in the site, but also to give some reflections on where the site has been and where we plan on heading over the next year. This can also be a place for you to drop us some comments about what you want to see more of, less of (so long as that "less of" isn't statistics!), or what you want us to change.

With that in mind, here are some Long-Term Plans as we forge ahead into our second year of operation.

I've also heard murmurs about other ideas in emails and comment sections: a Modern-focused forum, "Legacy/Standard Nexus," hosting paper or online tournaments, in-person coverage of Modern events, and many more. These proposals and all the other bold suggestions I've heard and mused on aren't necessarily off the table, but I do want to prioritize the four goals above before getting too ambitious.

Keep your eyes open for some more announcements over the next month. Although these more administrative postings (not to mention the work that happens behind the scenes) might cut into the 2500+ word articles you've come to expect (eagerly anticipate? dread?) from the Sheridan Monday-Wednesday days, it will be worth it in the end if it means a more robust, informative, and enjoyable Modern Nexus.

Thanks for reading and a big thanks again to all of you for your continued support and reading. I'll be responding to all of you in the comments, so feel free to take questions, ideas, concerns, worries, and all other feedback there. You can also always email me at sheridan@quietspeculation.com, and although I have been inconsistent in responding to emails in the past month, I'll be back on top of it as we push into this new phase of growth.

23 thoughts on “Celebrating One Year of Modern Nexus!”