This isn’t Tarmogoyf. That said, it’s a lot closer to Tarmogoyf than it is to Elvish Warrior.

Elf and Ally are creature types that have mattered in the past, though at this point in time neither convincingly matter for this card. That said, this card has some rules text that definitely matters.

A 2/3 vigilant creature for two is a bit underwhelming, and six lands is a lot of land to have in play. Where I see this card coming into play is as a great sideboard card for the Standard Ramp decks to combat Atarka Red. Jaddi Offshoot is just such a bad card without any power to actually even kill a goblin token. Sylvan Advocate, on the other hand, kills almost any unpumped creature in the Atarka Red deck with the upside of attacking back for free. The vigilance is admittedly negligible, but you never know when a small edge like that will matter. A bigger edge that the card has is the ability to survive Kozilek’s Return. 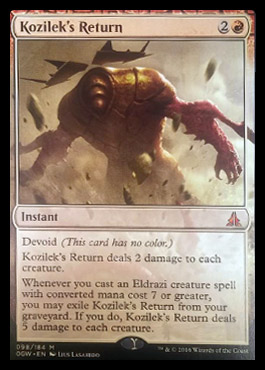 Until you have six lands in play the card doesn’t match up very well against the other decks in Standard, but again, it’s a lot less embarrassing than Jaddi Offshot. Then when you do hit the six land mark, a 4/5 is nothing to scoff at. Curing Sylvan Advocate into Map the Wastes into Explosive Vegetation leaves you with a 5/6 on turn four- not to mention that you untap with a billion mana.

If we’re talking about Modern, then the comparison to Tarmogoyf sounds much more ridiculous. This card simply doesn’t have a place there. It’s fun to think about combining Sylvan Advocate with Mutavault and Treetop Village, but I’d be amazed if anything came of that.

As a Standard only regular rare, I don’t have high expectations for the price of this card. My assumption is that you’ll want four of these if you plan to play Eldrazi Ramp in the near future, and that you should just stay away from this card otherwise.