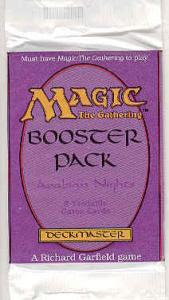 ...unless you hate math. Most Magic players, despite being really nerdy and loving math, never stop to think about the crime against statistics they're perpetrating when they bust open booster packs. Instead, they tear into their cardboard bounty like starving dogs tearing apart a piece of steak. They fall prey to the human condition - remembering fondly the time that they opened a Thoughtseize and a FOIL Thoughtseize in the same booster pack without any regard to the ridiculous improbability that just occured. They forget all the worthless packs they open, opting to believe in "good luck" and other such things that no good Magic player dares believe. What is it about the allure of the unknown that makes us so apt to throw our good sense to the wind? Magic players, like Poker players, are usually very talented at statistics yet we go nuts at the slight crinkling of a sealed pack's wrapper. Get a grip, people! You don't expect to topdeck your best card in your hundred-card EDH deck because you're not a moron - you know that the odds are 1 in however many cards are left in your deck! You wouldn't plan your entire game of EDH on the odds of 75::1, would you? Duh, of course not.

But you've probably opened a booster pack recently, haven't you? Shame. On. You. Let's find out just how bad things are. Using prices from findmagiccards.com (used for their neat sorting of set, rarity and price), I put all the cards from Alara Reborn into a spreadsheet. Here are some base numbers:

Those are simple averages without any regard to the actual ability to resell a given card. I'll touch on that aspect shortly. Now, there are 10 Commons in a pack, 3 Uncommons, 1 Rare -or- 1 Mythic (1 in 8 rares will upgrade to Mythic). To account for that, I simply weighted each number accordingly - Commons x10, Uncommons x3, Rares x.875, Mythics x.125. I did not account for Foils, since I'm honestly unsure about how they're seeded beyond the 1 in 67 cards statistic on the wrapper. I also did not take any steps to account for print runs or anything else beyond the simple average prices as of the writing of this article. The more mathematically inclined readers of this site will already realize something very impressive: the average expected value of a pack is almost exactly it's retail price! To be precise, a pack retails for $3.99 plus tax, whereas the average value ended up at $4.01. Pretty cool.

There's a problem, though. Actually, there are a few. First of all, if you know a place where you can reliably and repeatedly sell any 10 commons for a dollar, please do share it with the rest of us! The same issue is true for most of the uncommons, rares and mythics that see print. The fact of the matter is that most low-priced cards are effectively worthless. There's a massive disparity between the "book" value and real value of low-end cards. Referring to the Tier System in A Trader's Guide I, commons are an extreme version of the devaluation of tier 5 rares.

We can therefore remove all of the commons from our list. Even the best ones like Putrid Leech can be found littering the floor after a draft, so their value is an absolute $0.00. The only commons in Alara Reborn of any significant value are Qasali Pridemage and Terminate, and even those can be had with little to no effort. The same is true for all but a handful of Uncommons. Leaving only the uncommons that have a value above 50 cents or so, and/or see constructed play, the average uncommon value falls to $0.17. Remember, we're treating every other uncommon as a $0.00 value because the chances to convert them to cash money are almost nil. By the same logic, I weeded out the rares that booked at under a dollar - such hits as Unscythe, Killer of Kings. Some of the rares at $1.07 are frankly garbage rares that no one would ever pay money for, but I'll leave them in to be...generous.

That puts our average rare price at $1.26. Looking at the Mythics, it's hard to say which ones are truly worthless. Mythics have Little Kid Appeal, which means they're easy to trade away to get cards you care about. Again being generous, I'm only going to zero away Maelstrom Nexus, Thraximundar and Defiler of Souls. That puts the average mythic price at $3.67.

Redoing the calculations with those numbers, you'll see why the average pack is really not worth it's retail price at all: the new reference price is an anemic $2.07. Just losing the dollar from the commons was 25% of the overall value. So now that it's clear your cards are on average only going to be worth half of what you pay for them, let's tackle the second reason you shouldn't open that pack that's tempting you right now.

Variance. You hear poker players bandy around this term a lot and I hear Patrick Chapin's not a big fan of it. [An aside - go find out what Zero Variance Magic is and find someone who will play it with you. You haven't known pain until you try to figure out the perfect play using every Magic card ever printed.] In simple terms, variance is just a fancy way of saying that the fewer packs you open, the worse the chance is that probability is being represented accurately.

Think about it, if you pop open a pack and find a 20 dollar rare, that's not indicative of the "average" value of the set! Not that you're complaining, but your scientific brain should at least say "hey, not every rare is worth 20 bucks!" Let's say you open another. Your pull? The worst crap rare of all time. You toss it into the fireplace and enjoy the 10 milliseconds of heat it provides you before being incinerated. Now your average pack is worth around 10 dollars. Still not anywhere near indicative of the actual underlying probabilities. This is why large sample sizes are important - statistics are only meaningful when the "experiment" is repeated a great number of times. If you're opening many cases of booster boxes, you'll start to see the numbers even out. You might even be working in such quantity that you can sell 4x sets of Commons and Uncommons - units that are meaningful, efficient and valuable to lazy Magic players.

The bottom line is that it's just not cost-effective to open packs. It's better to draft them, trade them, sell them, or just save them in a drawer somewhere for a while. Opening a pack is fun for about 11 seconds and every so often you get the rush of opening an uber-rare, but if your main goal is being smart about your Magic finances, keep your pack sealed. If you absolutely must open sealed product, see if you can exchange it for a different set. Many retail stores will let you substitute your prize packs so do your research before you accept the most current set. While I haven't crunched the numbers for all of Standard, a short bit of work should reveal the sets with the highest expected value.

Until next time, remember that every set has it's Pale Moons.

PS: I did the figures for Lorwyn, and although it is a larger set than Alara Reborn, it's got 50 cents a
pack on ARB. At 2.57, it's starting to reach the point where buying the cards in large bulk and opening them could be a break-even endeavor. I wonder what Future Sight's prices upon release would look like. If you simply change Cryptic Command's price to reflect what Tarmogoyf might have looked like (~40 dollars), the average pack value shoots up to 2.85! At that level of EV for a pack, it's easy to see why dealers decided Future Sight was worth more opened than sealed. When you open as much product as large dealers do, you minimize variance and also accumulate enough of the zero value commons and uncommons to sell in Playsets.

2 thoughts on “Why you should never open another booster again…”