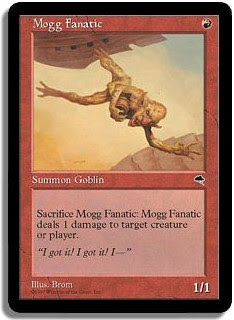 After taking a few days to digest the major announcement from Wizards, it's time to start figuring out what cards are going to see major changes. We'll start with the change that everyone's making a fuss over: Combat Damage not using the stack. Many cads with Sacrifice abilities got SERIOUSLY nerfed, while some combat tricks got changed. The ordering of blockers (and similarity to Trample) also changes some cards dramatically. Let's go over some of the uncommons and rare creatures in Standard with sacrifice effects:

Dauntless Escort: Big loser here. No more X-for-1s with him. He is clearly not the powerhouse he used to be, so there will be a drop in value here.

Fulminator Mage: His utility as a land destruction spell remains, but it's very hard to get your value now. He's already only 4 bucks and unless the LD deck Kyle Sanchez suggested on Star City takes off, he's kind of not that good.

Glen Elendra Archmage: Although most people use this for the Seal of Negate ability, the fact you can't counter a trick while damage is on the stack is a negative. Frankly, the card is still plenty good without stacked damage tricks, so there shouldn't be any movement one way or the other.

Siege-Gang Commander: Despite its high power level, the Siege-Gang sees little Standard play right now. The ability to stack damage AND fling Goblins was part of the card's appeal and while the card is still fantastic, there's no doubt it loses a lot of its power with this change. Since it's not played much in Standard anyway, there won't be a huge demand change. The implications for Legacy Goblins, however, are absolutely HUGE.

Burrenton Forge-Tender: Darn. Losing one damage off the Forge-Tender is really not going to matter. You can still block and prevent a second attacker, you just can't damage the blocked creature. Still a great SB card.

Mogg Fanatic: The big one. Mogg Fantastic is still great - a 1 drop with utility, but it's frankly just not what it has been for the last 10 years. Red Deck Wins still has to play them since it's about the best thing to do with the 1-drop spot next to Figure, but with Ball Lightning coming back, Flamekin Bladewhirl might be making a serious case for play in RDW.

Nantuko Husk: Not many decks (if any) are running him in Standard, but those that do are losing a tremendous weapon. Despite being strictly better than Scathe Zombies, he loses a lot of his punch. Not really a big deal but worth noting.

Thopter Foundry: Not Standard, but the Block Esper deck just hates this. No more trading with another creature AND getting a free creature out of it. Beyond it's applications in the PT block deck, there don't seem to be many uses for it. Still a shame.

There are surely other cards that are effected, but things with sacrifice effects are the hardest-hit. You can see that the vast majority of cards remain the same, but a few real powerhouses have been hit hard. Thankfully no really valuable cards have taken a hit in Standard as far as we can tell.

3 thoughts on “The Attack and the Lack of a Stack”