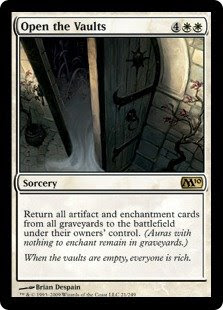 On the final day of Nationals, Jonathon Loucks of ChannelFireball.com joined me at the Hyatt Regency Crown Center in Kansas City, Missouri. The pieces of his Time Sieve deck were selling well with all of the vendors on-site, so I asked him if he wouldn't mind sharing his thoughts on the rogue deck that took Finland by storm and earned at least one mage a spot in the US Nationals. A pack of Skittles and a Thank You later, we sat down and he laid it all out.

KR: So, what gave you the initial idea for the Time Sieve deck?

JL: I was writing a set review, and while I was writing I was thinking, “What should my next article be about?” I thought Time Sieve might be the most breakable card in Alara Reborn and I decided to write an article about it. I like making lists in my articles, so I searched Gatherer fir all the artifacts in Standard. Kaleidostone and Elsewhere Flask showed up – those are artifacts you really like to sacrifice to Time Sieve, and Chromatic Star was a huge one.

JL: Somehow it evolved into a Howling Mine deck – Etherium Sculptor was a main part of the deck because if you had two of them you could play Kaleidostone and Elsewhere flask for free and just cycle through your deck. The problem was it was, kind of fizzling. You were sacking artifacts and taking more turns and sacking more artifacts, and you were usually going down an artifact every turn, instead of up. You weren’t ever really getting anywhere, so the games where you’d win were usually the games you would go. “Tezzeret, untap, take an extra turn, kill you.” You weren’t really taking a lot of turns. I kind of put the deck on the back shelf, and wrote an article about it.

JL: Then M10 comes out and I need another article, so I ask myself, “what are breakable cards in M10?" I find Open the Vaults and I’m like “That’s definitely the most breakable card in M10!” I made a list and realized, this is the Time Sieve deck! I built the deck, tried it out, and Open the Vaults was just ridiculous. The deck was actually working! You would take extra turns, Open the Vaults to get them all back, draw a bunch of extra cards. Font of Mythos was another piece that was good. The big addition was Time Warp. I was running all these Howling Mines, so taking an extra turn really helped. That’s where the deck started – trying to break Open the Vaults and Time Sieve and it just really took off.

KR: How do you feel about Open the Vaults being played in Esper Aggro once Zendkar Standard is the Metagame? Using Open the Vaults to emulate Patriarch’s Bidding in Goblin-Bidding decks.

JL: Its so funny that you should mention that because in testing for Nationals, I made their deck from block – I made the Kibler Thopter Foundry deck because it could beat Elves with Ethersworn Canonist. I tried it out and I was like, I can’t imagine this deck beating Spectral Procession, so I set it aside.

JL: I was thinking about Open the Vaults like Goblin Bidding and bringing them all back, like Glassdust Hulk? The Glassdust Hulk is in play, Glaze Fiend’s in play? Wow. It’s worth a shot. It’s really funny, I was like, “How do I give Glassdust Hulk haste?” I was searching for Artifacts and Enchantments and I came along Ashling’s Prerogative. You set it to “Odd” so creatures with an odd converted mana cost come into play tapped. All of their elves come into play tapped and all your Glaze Fiends have haste. I don’t think it’s good enough though - it comes back with Open the Vaults but when’s that ever going to be in your graveyard? [That card’s also rotating with Lorwyn-Shadowmoor. –KR]

KR: What was an idea or two that didn’t pan out in testing? Once you had Open the Vaults and Time Warp in the deck, what were some cards where you said, “ This is going to be great!” and then it sucked?

JL: Etherium sculptor was the card in the original deck before Open the Vaults was. It was the engine, it was the best card. As I started playing with the new version, it didn’t seem as useful and Elsewhere Flasks and Kaleidostones were getting cut. Sculptor had a lot of promise in the beginning. Eventually the deck moved more towards Turbo Fog running Pollen Lullaby and Angelsong and the fogs really helped. The version of the deck that had Open the Vaults and Chromatic Star in it were really good, but apparently Chromatic Star’s not in M10. I was really excited about it because it got all these new cards, but Chromatic Star was not one of them. That’s the card I miss most by far.

KR: There are a lot of people playing for an invite over the next month. Would you or would you not recommend this deck for a PTQ as it is right now and/or with minor modifications.

JL: Two weeks ago I probably wouldn’t have recommended it, but then it won Finnish Nationals, and somebody ground in with it here.. There was a lot of it at the grinders! I think the deck’s really hard to play – it felt so when I played it. I stopped developing it when it was pretty rough but I think the deck has promise. I was scared of Maelstrom Pulse from Jund Cascade and I’m scared of Faeries and Five Color. As a Howling Mine deck, I don’t know how you do when giving them extra cards. I don’t know if you can get a Time Sieve through. Mistbind Clique scares me…

KR: Does it seem like it’s in a good position in the Metagame?

JL: If you can figure out how to beat Five Color Control and Faeries. At least you can’t lose to Kithkin. I think you can beat Elves with Ethersworn Canonist out of the sideboard. It’s probably not the best choice but it’s fun!

KR: With the departure of Lorwyn-Shadowmoor, what is the deck going to lose and what is the impact of the losses?

JL: Losing Cryptic Command really hurts! That card's so good for the deck – it bounces things you care about, it counters stuff, and it fogs and draws a card! It’s so good! Losing Cryptic Command is important, but losing the chance of getting matched up with Fae or 5cc is way better. After the rotation I would definitely look at this thing. You lose Pollen Lullaby but there’s always going to be a Fog. You can find a way. You lose Elsewhere Flask but you can work with the Kaleidostones. The engine stays intact. You can always find artifacts to sack but it’s a question of how efficient they are.

KR: You have snuck into WotC R&D and you are tinkering with Zendikar so it will be favorable to your deck. What’s a card you’d put into in that set, and what’s a card or mechanic you’d pull out?

JL: I’d like a one mana cantripping artifact. It’d just say “draw a card” and that’s it. Losing Chromatic Star really hurt, so they could just reprint it. Cantripping Fog would be awesome, but really efficient artifacts to sacrifice are all you need . A flexible counterspell like Cryptic was, or maybe a Remand or a Memory Lapse would be kind of nice. Sleep is another way you can go with the deck. Boring cards are what I want, but the deck just needs efficient fogs and artifacts. Holy Day was actually a really big loss.

JL: I would remove something like Crptic Command, a really efficient counterspell that can stop my Open the Vaults. It’s funny – I want my Open the Vaults to resolve but I want to counter things too! I’d also say no to more burn spells! I’d love a spell that stops me from losing to Flame Javelin, like a Mark of Asylum for players. We lose Flame Javelin in the rotation, but Bolt coming back is even worse. Cheap burn scares me.

KR: How do you feel about the deck in the future, after Lorwyn and Shadowmoor’s tribal decks are gone?

JL: I would take a hard look at this deck after rotation. Its enemises lose more than it does. There’s going to be a lot of cascade and there will be Lightning Bolts and Ball Lightnings, and of course the white Soldier deck. So, at least you’ll beat the white Soldier decks! If Jund can Bloodbraid Elf into Maelstrom Pulse and hit your Borderposts it’s bad news. It’s probably a tier 2 deck – but it’s something I’d play, because I’d feel comfortable with it. We’ll see what happens with Zendikar but looking at M10, I think it would work.

JL: I write for ChannelFireball.com, over there with LSV, Riki Hayashi, and a bunch of cool people. My column is Rogue Report – Riki Hayashi came up with that one. I usually write about rogue decks. They go up on Monday night/Tuesday morning.

Jonathon’s article from this week can be found on ChannelFireball.com Now that Nationals is over, we’ll be trying some new things in the process of changing over to a schedule of publishing. Be sure to leave your feedback, positive or negative, in a comment on each article! I’d like to thank Jonathon Loucks for his time, enthusiasm and his patience with my recording equipment. If anyone has a suggestion for an inexpensive microphone and some good software for a MacBook, it will be welcomed. Keep checking in for more fun stuff from Nationals!

I had the utmost pleasure of drafting Evan Erwin's cube in Kansas City this weekend, and Jonathon joined us. He drafted nothing but 2-for-1s and mana fixing and utterly obliterated people with his deck. The play of the night was probably the one that follows. 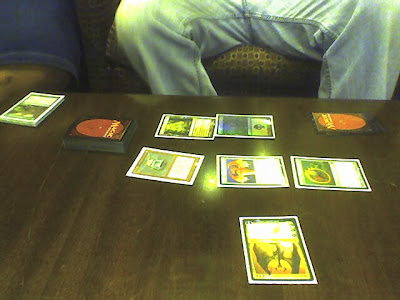 On the play, to my board of Mountain x2, Kird Ape:

Turn 3: Nicol Bloas, Freaking Planeswalker right off the top. We realized that it was only 7 mana and he had to wait until next turn to play the 'walker, but at that point there was no way I was coming back from a turn 4 Nicol Bolas either.

Needless to say, I scooped after he started "altering" my mana base.