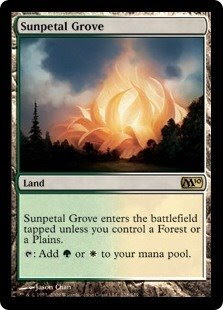 Most pre-releases have come and gone, and with any luck you've returned home with a pile of awesome new M10 stuff! Before the Release tournaments this weekend we have an opportunity to discuss the trends that emerged at pre-releases and adjust predictions accordingly. To that end, we'll cover what was observed and overheard. It was a 34 person local pre-release, attended mostly by casual players and a handful of tournament-goers.

The #1 trend was the utter mayhem that surrounded the new Dual Lands. Normally docile traders with good manners were motivated to outright rudeness by the desire to acquire. It seems that over the course of the day, traders realized that they would not be able to get Duals quickly or easily and decided which was most important to them in that moment. Of the new Duals, Sunpetal Grove seemed to be in the highest demand due to its auto-inclusion in one of the best decks in the format. 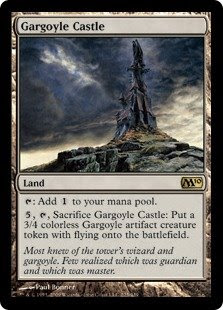 Another surprising trend, and one that is supported by Star City's top seller data, is the popularity of Gargoyle Castle. He was insane for everyone in Sealed Deck, and is very constructed-playable. At least 5 were opened in the room, and none of them seemed to change hands. They're still only 2 dollars on StarCityGames and they've been selling for about that much on ebay. If you've read the Trader's Guide, when a card's ebay price is at parity with its SCG price, that's good news for its value. For what it's worth, ChannelFireball has it at $3. Luis Scott-Vargas' level of input on their pricing is unknown, but his opinion on the Castle is that it belongs in most decks in Standard. Don't expect this card to stay cheap.

In regards to one of the most hyped rares in the set, Silence is most apt to describe the talk around this card. Being a small pre-release, only one was spotted. The owner eventually parted with it for a Twincast, and commented that "everyone's been asking for this today". The corollary to this is that Twincast is still very popular among the casual players and the sadistic souls who play Sanity Grinding. The position on Silence is still "over-hyped", so feel free to flip them quickly at the release events.

Jace and Ajani are likely to be very popular baby names in 2020, judging by the number of players looking for these guys. Garruk was never mentioned and wasn't spotted, but Jace and Ajani were almost impossible NOT to trade. Perhaps it's the Mythic symbol on the cards, but Jace was fetching two Dual Lands from some people. Planeswalkers really appeal to the casual and tournament players alike, and thus will probably rise in value. Jace particularly seems underpriced at 12 dollars, considering how popular he was on the day.

Some other notes on the day: Ball Lightning was not in high demand, Guardian Seraph was never asked for by name, while Baneslayer Angel was a card no one would even consider trading away. Honor of the Pure was a hot item, but most players seemed fine with trading it, with one even remarking, "I just don't see what the big deal is!" That player has clearly never played with the card. Playtesting has proven that Honor is simply not just a replacement for Glorious Anthem, it's a Glorious Upgrade. Sanguine Bond is a crap rare, but it's a crap rare some casual players were asking for. It seems to appeal to their sense of "fun" and irony. You can get it as a throw-in on a trade and potentially flip it for some value.

Elvish Archdruid was another card that was difficult to acquire. The "OMG ELF! Factor" combines with the "I need one for EDH" angle to create scarcity, but the truth is that this card takes Elf Combo to the next level. Playtesting has shown that the Elf Combo deck in Standard got approximately a turn faster. The deck is already capable of turn 2 Primal Commands, for crying out loud! Archdruid gives the deck some resistance to Fallout effects and also facilitates the beatdown strategy (when/if the combo fizzles). Archdruid is a card to keep a keen eye on, as it shows the same pattern that Gargoyle Castle does. Ebay and SCG are at parity and ChannelFireball is a dollar higher.

We want to hear what YOU saw at your pre-releases! What traded well? What was impossible to get? What were people asking for? Post a comment with your pre-release story!