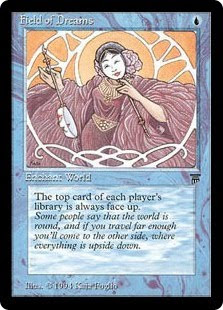 If you build it, they will come. Sometimes, a format is popular enough that it takes flight without any DCI intervention, but this is not always the case. The issue facing the Vintage community today is such a case. The scarcity of cards and price of entry to Sanctioned Vintage events is prohibitive to new players, and the 10-proxy system is doing more damage than good.

If you've not read Patrick Chapin's article on the Premium side of Star City Games today, you really must. With the eloquence that only the Innovator brings, he lays out the dilemma facing the Vintage community. Proxies are killing the format. While the article won't be rehashed here, since we like and respect our friends at Star City, the crux of the matter is that all humans have a sense of investment. Investment. That's a word we discuss a lot here. What is Investment, and what does it mean to the more financially-minded players of our beloved game? Among the many dictionary definitions of the word, investment means two things:

"A devoting, using, or giving of time, talent, emotional energy, etc., as for a purpose or to achieve something"
"The use of money or capital in order to gain profitable returns, as interest, income, or appreciation in value."

While the latter definition is more common, and the focus of Quiet Speculation, the former definition may be a little less straightforward. Chapin's article accurately suggests that Vintage players who use proxies are less emotionally invested in the format as a result. Standard is a popular format because it allows players a number of liberties that older formats do not. The relevance of new cards is of paramount importance - Wizards wants the new cards to be applicable and useful. New Eternal staples are few and far between, and that's because Eternal formats don't drive sales like Standard staples do. Wizards understands this, players understand this, and that's why M10 sold so amazingly well. Every serious player needed to own playsets of at least 7 cards in M10, one of which was Mythic.

The truth of the matter is that product support drives players to a format. As human beings we will naturally remain financially and emotionally invested as long as Magic remains a collectible card game. It's a form of inertia; unless an outside force acts upon a player, that player will continue to play His Format. Everyone has their format. Some people have multiple formats, but almost everyone has a format they prefer for some reason. If you own a playset of every rare in Standard, you'll play Standard. If you own Power, you'll probably play Vintage. It's a chicken and egg scenario - which comes to a player first, the inkling to play a format or the resources to do so? If you want to play Vintage, you'll get the power. If you get the Power, you'll want to play Vintage. It seems, then, that the answer is to get Power into the hands of players while giving them an incentive not to trade or sell said Power for newer cards.

While Chapin's article mentions weaning players from proxies, this will be difficult to do for financial reasons. Step into the shoes of your average TO. Most of the TOs you'll meet are good businessmen (or women!). They run a business like any other entrepreneur, and their goal is to generate profit which can be reinvested towards growth. If 10-proxy is profitable and enjoyable, why on earth would they stop doing it? It doesn't make sense. The only weapon that the DCI can employ is the lack of sanctioning, and it's clear that players don't care. The general sense is that Vintage players will play the format whenever they can, especially in areas that haven't got a thriving Vintage community.

The DCI simply cannot regulate unsanctioned games of Magic. Just like they can't bust onto Timmy's kitchen table at 3am, hold a gun to his head and force him to Rochester Draft, they can't do anything but suggest that TOs sanction their events. So what's the solution? Well, let's look at what the Federal Government (of the United States, for all the overseas readers) has just done. The "Cash for Clunkers" program offers a significant incentive to buyers of fuel-efficient vehicles. It was not simply enough to take a moral high ground and spout out "Green" rhetoric, wasting precious television advertising space and accomplishing little. The CARS program elegantly solves two issues - one, that Americans cannot afford to buy brand new cards in the midst of a horrible recession, and two, Americans love their gas guzzlers. By making brand-new fuel efficient automobiles less expensive, Washington's not-so-invisible hand is guiding automotive spending.

How does this apply to Magic? Well, let's look at the biggest complaint that most would-be Vintage players raise - the cost of entry. It's no secret that Vintage is an expensive format for a neophyte. Even a very heavily played set of traditional Power will cost a few thousand dollars, and that doesn't include mini-Power like Bazaar of Baghdad, Mana Drain, and Dual Lands. Although Magic occupies a large demographic, many players are under the age of 30 and do not have access to that level of disposable income. Compounding this issue is the sheer scarcity of Power and the fact that people rarely "trade down" with Power. In short, it's a lot easier to get a playset of Baneslayer Angels and Great Sable Stags than it is to get a single Mana Drain.

Wizards needs to get players invested the format. There are many ways to do this, but all of them will eventually encounter the same problem - there are only so many Lotuses out there. Without worrying about the other few thousand dollars of cards a Vintage player needs, you MUST own a Lotus if you're playing Vintage. End of discussion. How does Wizards get Lotuses into the hands of players? Here are a few ideas.

Print an extremely limited run of foil Lotuses on the old border with the old art. This version should look as similar to the original as possible. Think Timeshifted. Black Lotus is an icon of the game, and to alter its appearance in any way would be a total catastrophe. Remember what happened with Meddling Mage? Most players these days tragically don't know who Chris Pikula is, but they sure know what a Lotus is. How limited will the print run be? Less than 100, for certain. Let's shelf this idea for just a second, and move on to the next one.

Begin a sanctioned tournament series that gives away Power. It's rather dumb that most Vintage tournaments have Power as the prize. If you play no-proxy Vintage, you probably have Power. How are new players supposed to enter the format when they need the prize to play? That's asinine! How about Standard and Extended tournaments for Power? There's no rule that says Vintage cards have to be given away only at Vintage events. Combine this with a microscopic print run of premium Power cards as prizes, and publicize it nationally. There could even be lower-level qualifier events that give out the 'lesser' Vintage staples as prizes, like Duals and Drains. As long as the scarcity is kept high, they will not effect the value of the originals. A tournament series like this would get players talking about Vintage as well as playing it, and it would also get some Power into the hands of players who don't want to spend thousands of dollars buying them outright.

Diversity will be the key to this program's success, but it should culminate in a big Vintage tournament with
lavish prizes and all the appeal of a Grand Prix or a Pro Tour. Run a few months of Standard Trials (or Qualifiers), a few months of Extended Trials, and then finish the series with a 2-day Grand Prix style event that's split format between Vintage and Legacy. Award lesser foil staples to those who place highly in the qualifiers. The basic idea is to make the format relevant while awarding cards that facilitate the playing of the format. While the structure would take a good deal of work, something like an annual Eternal Championship Series would help support an old and struggling format. Get the cards in the hands of players and give them an incentive not to sell those cards. If you need a Lotus to play a tournament where the first prize is thousands of dollars, you're going to keep that Lotus. Give the players a reason to play Vintage every month out of the year, reward them handsomely for doing so, and the format will see a resurgance.

It should be noted that Vintage and Legacy will never see the popularity that Standard does. It's impossible. The format could not support such a number of people without a massive reprinting effort. Such an effort would demolish the price of Power if done incorrectly and would not be worth the risk. In all probability, 50 new copies of Black Lotus in foil won't mess with the price of the old ones too badly, nor will a couple hundred foil black-bordered Duals. This would seem to fall within the constraints of the archaic Reserved List which states, "All policies described in this document apply only to non-premium, tournament-legal Magic cards." Discussions regarding the Reserved List's place and contents are best left for another day, but suffice it to say that a document needs revision when it states that the value of Oath of Ghouls needs to be protected. Mind you the List makes no mention of Oath of Druids.

The issue at hand is an extremely complex one, but Pat Chapin hit the nail on the head when he explained that Vintage is all about investment. Wizards needs to find a way to get players invested in Vintage, and that's best done by providing them something that can't be had any other way. Give us a chance to earn the cards for the format, give us a reason to talk about it on the forums, give us something to become slightly outraged about, and give us a big prize pool to win. If you build it, Wizards, they will come, so let's build the damn thing already.

8 thoughts on “Field of Dreams: Emotional Investment & The Vintage Conundrum”