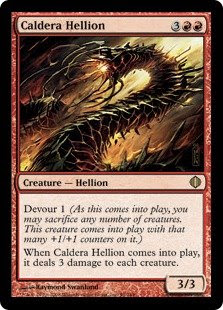 Welcome back! Lorwyn’s days of dominating Standard are coming to a close. The trade winds are abuzz with players selling off their filter lands and reflecting pools. Everyone’s asking “what’s going to drop in value?” Nobody’s asking the more important question.

Don't worry too much about what's going to drop in price. Drops are usually slow and drawn-out, whereas spikes are quite the opposite. It usually takes the banning of a card entirely to kill its value overnight.

With a whole lot of format-defining stuff rotating out, we owe it to ourselves to take a second look at Alara Block on the whole. Starting with Shards, there are a few cards that have untapped potential. A few are in use in Standard right now, some shone in Block, and some haven't seen much competitive play at all.

Broodmate Dragon – Pound-for-pound the most efficient finisher for both aggro and control decks. Lorywn block has us spoiled, but once Cryptic Command and Spectral Procession are gone, Broodmate’s going to be very good.

Caldera Hellion – Those in need of a board sweeper still have Pyroclasm and Volcanic Fallout, but Hellion is a total blowout against other aggro decks. You usually kill one or two of your own guys with Fallout anyway, right? Hellion has the potential to wipe the board and leave behind a large beater. Does that sound like the kind of card you’d toss in the Bargain Bin?

Ethersworn Canonist – Another card that just doesn’t stack up against Spectral Procession, Canonist is a Bear with serious upside. The Metagame will ultimately decide if it needs Canonist or not, but if they’re needed, they’ll jump in price.

Goblin Assault – This card wants to be Bitterblossom. It saw play at Nationals in the top 8, and has a powerful effect at what would normally be a reasonable cost. Again, without Bitterblossom in the format, this effect may become viable.

Knight of the White Orchid – People thought the card would be valuable when it came out, but it really only saw play in Reveillark decks. The interaction between Knight and Borderposts is very nice, and the ability to shuffle away an awkward Ponder is useful too.

Master of Etherium – He’s in a theme deck, so unless Esper Aggro becomes the top dog in post-Lorwyn Standard, he’ll stay around 5 dollars. If Esper Aggro turns out to be top-tier, he could see as much as 10. Just keep an eye out for the Metagame shift.

Ranger of Eos – Zendikar spoilers will determine the value of the good Ranger. Losing all the great one=drops from Lorwyn means we’re stuck getting Akrasan Squire and Wild Nacatls. If Zendikar brings some powerful one-drops, Ranger of Eos will rise past the 3-4 dollar mark it’s at right now.

Scourglass –It’s a one-sided Planar Cleansing in most non-mirror games, recurrable, and 2 bucks for a playset.

Tezzeret the Seeker – He’s hovering around 10 dollars, but he has the potential to be the most broken Planeswalker. Artifacts aren’t that good right now, but it only takes one or two minor slip-ups to create something ridiculous like the Vintage Tezzeret decks.

In all, Shards of Alara has a great number of solid cards, but contains nothing heinously under-priced. Caldera Hellion is probably the most under-valued but only because it is so cheap right now. Quite a few playsets can be had for a dollar on Ebay.

6 thoughts on “Shards of Alara: Under-rated and Under-priced”