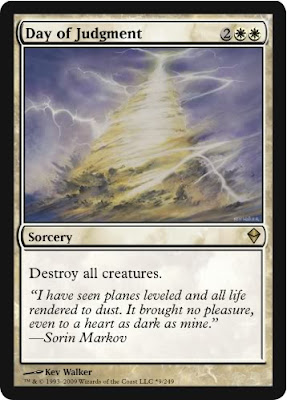 We all knew this was going to happen. On some level, Magic without Wrath just wasn't going to be Magic. Being able to sweep the board on turn 4 is vital to keeping Aggro decks in their place. The loss of Wrath and the rotation of Hallowed Burial stings a little less now that we've got a suitable replacement. The lack of a no regeneration clause shouldn't factor in the card's utility, but keep an eye out for an aggressively-costed regenerator.

Unfortunately, Day of Judgment's printing most likely spells the end of Wrath's days in Standard for a long time. The card's held its value to some degree, but frankly there's no reason for it. Nostalgia can only prop up a price for so long.

It should go without saying that Day of Judgment will be a chase rare, box promos be damned. Wrath of God was always a 10 dollar card, and there's no reason Day of Judgment won't be. It would be unwise to pre-sell them lower than 10 dollars, and they have the chance to hit 15. Most players will need a set of the new Wrath and the supply won't be padded by 10 Core Set printings, 2 Portal printings and a Player Reward promo. It won't be easy but treat this card like you hopefully treated Maelstrom Pulse at the Alara Reborn pre-release. Pay the going rate for your Days of Judgment and get every copy you can. Pre-releases are great for savvy traders since there is heavy demand for cards that will ultimately end up in the Bargain Bin. Once the spoiler is out, we'll cover the studs, duds and sleepers of the set so you can formulate a pre-release trading plan.

2 thoughts on “[ZEN] Day of Judgment”