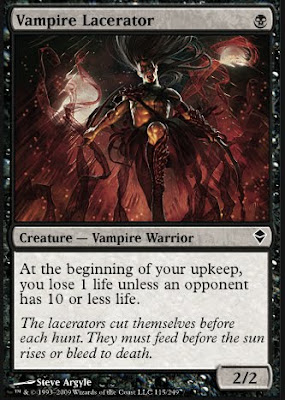 Every Monday night/Tuesday morning, QS publishes the Week in Review over at the Starkington Post. To read this when it comes out, check the Post around midnight Pacific time every Tuesday morning.

It’s a great time to be a Magic player. The 2010 Pro Tour stops in Southern California, Puerto Rico, the Netherlands, and Japan, Wizards just released the most influential Core Set since Alpha, and Zendikar is shaping up to be one of the most dynamic sets the game has seen in a long time. Magic sales are up all around the world, Magic Online just released Masters Edition III, and Duels of the Planeswalkers will be adding to its repertoire by offering Xbox Live DLC (DownLoadable Content) in the near future. All these things prove in a big way that it’s an excellent time to be a Magic player!

When Mark Rosewater announced that there would be a long-anticipated cycle of cards that players have been begging to see for years, the hopeful speculators wondered if enemy fetch lands would finally see print. Well, in a move that shows just how in-tune WotC is with their market, those speculators were completely and totally correct. Arid Mesa, the red-white fetch land, was previewed in grand fashion at PAX, and showed us that these new kids on the block will be able to hang with their older siblings from Onslaught. No one needs to be told that these lands are good, but they may not reach full value until Christmas time. Why? Simple – the PTQ format for San Diego is Zendikar Sealed and Standard won’t be a PTQ format until tax time comes around.

That means the major demand for these fetch lands will stem from the Extended qualifier season starting January 2nd, at which time you and your Mesas can compete for a slot at Pro Tour-San Juan! It is the Extended format that will truly leverage the power of the new fetch lands, as Ravnica duals will be legal there for two more years. As such, it might be prudent to wait on trading for your fetch lands until the initial hype dies down. If they’re going for under 10 dollars where you play, then by all means scoop up every copy you can, but if they’re $15+, hold off.

Speaking of Extended, get your cards for the upcoming season over the next few months. The Ravnica duals are much harder to get in the middle of a PTQ season and will remain a staple of the format for their entire tenure. Now is also a good time to get cards for decks like Mono Blue, since many of the cards in that deck are losing value with the Standard rotation. It’s difficult to predict where things like Thoughtseize, Mutavault and Cryptic Command will settle, but all three are high quality cards that have a chance to see a home. If you don’t have them already, let them rotate before you trade for them. If you’ve got them, just hold them. It’s not worth the effort to attempt a short-swing profit.

Moving on to post-Zendikar Standard, it seems like everyone’s losing their collective minds over the new Goblins. Warren Instigator’s potential is completely insane, and he’s backed up by TheStarkingtonPost.com’s own preview, Goblin Guide. These two pals form one of the most impressive 1-2 punches the format has seen in a long time, but the tribe as a whole suffers from a medical condition known as Diestofalloutitis. Most commonly seen in aggro decks, Diestofalloutitis is characterized by a severe vulnerability to instant speed board sweepers and is often fatal for the infected deck. It seems like there are a great deal of early drops in Zendikar so far, many of which have more severe drawbacks than we saw in Shards of Alara. Black has a Carnophage wanna-be and green got a 3/2 Rogue Elephant with shroud. Unfortunately, it seems like all of these cards are great at dying to Volcanic Fallout and the new Day of Judgment, so be careful when building new aggro decks or buying into the hype of something like Warren Instigator.

The prevalence of all these under-costed beaters would normally be terrible for control players, but today’s control decks have the tools to handle even the most aggressive starts. While mana bases will certainly be weaker with the loss of Vivid lands and Reflecting Pool, we have tri-lands, fetch lands, and M10 duals with which to create great mana bases. Fetch lands and M10 duals are not as synergistic as Ravnica duals are, but they still work very nicely together. The biggest challenge facing control players is the mana base; when 5 Color Control figures out its post-Zendikar mana base, watch out. A deck that can run Path to Exile, Volcanic Fallout, Day of Judgment, and Cruel Ultimatum is a force to be reckoned with. Quest for the Gravelord is a great enchantment to play when you’re developing your early mana, and it can turn a timely Volcanic Fallout into a blowout of epic proportions and end the game extremely quickly.

So far, it looks like the chase cards will be the Fetch Lands, Warren Instigator, Day of Judgment, and any planeswalkers – as always. Day of Judgment should be your priority come the Prerelease, as it looks like the format is about to get seriously aggressive. The fetch lands might be over-valued at first, but when they fall back to earth, load up on them. Warren Instigator is a risky play because the hype is as high as it can possibly be. They’re pre-selling around $15 a piece on eBay, which is probably lower than they’ll start out at places like StarCityGames, but the risk of a Goblin deck never taking off is very real. If you absolutely must have a set of them, be careful and keep a sharp eye on how viable the tribal deck truly is. Unlike Goblin Guide ($5 or less on eBay), which is insane in any aggressive deck and should be picked up while it’s cheap, Warren Instigator is only really good in a dedicated Goblin deck. The existence of Whiplash Trap alone should be enough to make a player want to shy away from aggro decks, but sometimes the allure of the Goblin is too strong. As long as the Goblin hype continues to
rage, demand for the peripheral cards like Goblin Chieftain and Siege-Gang Commander will remain high. Pick up some copies of each if they’re inexpensive in your part of the world.

Planeswalkers are difficult to assess early in a format. In a vacuum they always look fantastic, but a planeswalker’s value is heavily correlated with the other 56 cards that surround it. Sorin Markov and Chandra Ablaze both have valuable “small” abilities and spectacular game-ending ultimates, but it remains to be seen if a tournament deck will hold either. With the exception of Elspeth, no Planeswalker has passed the 20 dollar mark yet, and it looks like neither Sorin nor Chandra will break that trend. In most cases, Cruel Ultimatum is more deadly, more immediate, and significantly harder to stop.

It’s easy to get caught up in the hustle and glamour of new cards, but you can’t get everything right away. It’s very important to prioritize new acquisitions at a Prerelease, and adjust your strategy according to your local “trading metagame”. Once the full set is revealed, we’ll do our customary review of studs, duds, and sleepers and get you prepared for one of the most exciting sets in years! Keep an eye on Quiet Speculation as the Prerelease draws closer, and we’ll see you next week!

9 thoughts on “Week in Review (as seen on the Starkington Post.com!)”