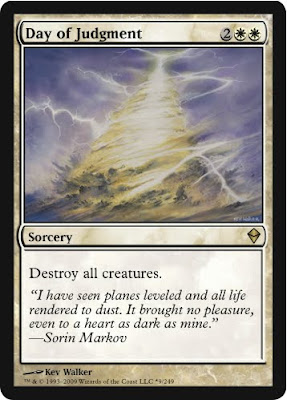 We've got it all! All 249 cards of the new powerhouse out of Renton, WA have been spoiled and what a set it has turned out to be. Without any delay, let's get to analyzing the rares and mythics and figure out where your money should be. These are preliminary predictions, so keep an eye out for changes in position as people start playing with the cards.

Armament Master - WW
Creature - Kor Soldier Rare
Other Kor creatures you control get +2/+2 for each Equipment attached to Armament Master.
2/2

A 2/2 for WW usually gets you at least first strike. He seems to take a lot of work to give bonus to an underwhelming tribe. Someone will want these on Friday, but it won't be you. Low-end rare.

Yawn! Timmy Trade Fodder. It's a 6-mana Aura that will win you the game in Limited, but sadly it's not constructed playable. Get what you can for it.

This ain't Spectral Procession by a long shot, but 6 guys for 5 mana isn't a bad deal. Kicking it for 11 will likely not happen, but its nice to have the option. This seems like a worse Martial Coup, but people love cards like this so it'll probably trade in the 4-5 dollar range. Don't go out of your way to acquire them quite yet.

You already know what to think about Wrath - Bomb, Stud, $15 card.

Great SB card against all those mono black decks people seem to be so enamored with. It'll likely just be a role-player, so a cheap playset might come in handy. Then again, its triple white to cast, so don't exactly seek them out.

Emeria Angel - 2ww
Creature - Angel Rare
Flying
Landfall—Whenever a land enters the battlefield under your control,
you may put a 1/1 white Bird creature token with flying into the battlefield.
3/3

Now here's a constructed-worthy card. If she survives a few turns, she can start to take over the board. The fact that she doesn't take a dirt nap when Fallout shows up is very important, and a 3/3 flier for 4 is never "bad". Should start at 5, and has the chance to head higher if a G/W landfall deck with Knight of the Reliquary comes to be.

Felidar Sovereign - 4ww
Creature - Cat Beast Mythic Rare
Vigilance, lifelink
At the beginning of your upkeep, if you have 40 or more life, you win the game.
4/6

Oddly enough, the best way to get to 40 life in Standard right now is Baneslayer Angel. If she connects four times, you're probably going to win anyway. It's pretty bad, but it has a whole load of EDH and Timmy appeal, so it should trade nicely at first. Get what you can for it and leverage its mythic rarity.

Overrated like crazy. It's a heck of an ability against a mono color deck, but with mana bases being so good, why play mono? It seems like a nice reanimation target until you realize how little reanimation there is these days. It's a legendary angel, so it'll probably hover between 8 and 10 dollars even if no one plays it. Remember Jenara, Asura of War? Same deal.

Kabira Evangel - 2w
Creature - Human Cleric Ally Rare
Whenever Kabira Evangel or another Ally enters the battlefield under your control, you may choose a color. If you do, Allies you control gain protection from the chosen color until end of turn.
2/3

If there were allies with Flash, this card could really get nasty. Protection is one of the best abilities in Magic, but in this case, all it really does is act like a Falter. At the moment, the Alliance seems to be weak, but keep an eye on this guy. He could have a role somewhere.

This card was an early favorite that has slowly been falling from grace. It's looking harder and harder to go four opposing turns without taking so much as a Bolt to the face, especially since aggressive decks come out so strong and so fast. The quest condition takes work, as opposed to cards like Bloodchief Ascension which are natural, so get a set of these on the cheap if you can and sit on them. You might still hit gold.

World Queller - 3ww
Creature - Avatar Rare
At the beginning of your upkeep, you may choose a card type. If you do, each player sacrifices a permanent of that type.
4/4

A lot of players seem to like him, but his ability is just not relevant quickly enough. Baneslayer Angel completely trumps at 3WW, and the ability to nuke opposing Planeswalkers just doesn't stack up to a 5/5 flying first striking lifelinker. These should trade well on opening day, but realize that they likely have no long term value.