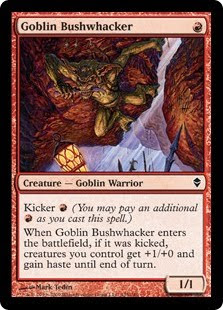 Since the Twitterverse has been begging for a list, here's the 75 for Boros Bushwhacker. I've been testing it with the help of Sam Stoddard, Paul Osborne and Greg Haenig (of MTG Salvation fame). A brief discussion will follow the List:

First off, it might be a 24-land deck. If it is, the 4th Bushwhacker gets cut for another Mountain. Otherwise, the maindeck choices are fairly tight. The SB is designed to make the White Weenie and Random Baneslayer matchups easier, as that's been the biggest challenge thus far. When a real metagame shapes up, the SB will tighten up accordingly.

The big question that got asked about this list is, "What, only ONE lynx and zero Geopedes?" Yes, in fact, they are as good as they seem but they introduce some serious variance into an otherwise clockwork deck. In its current form, the deck can almost always goldfish a turn 4 win. Between 10 Fetch Lands and 4 Rangers, the deck runs very consistently and is almost never out of threats. Hellspark Elemental replaced Plated Geopede in testing because, ironically, of its LACK of board presence. This deck wants to set up a board of 2-3 cheap creatures that NEED to eat mass removal, then punish the opponent for tapping out when they do so. Your post-Wrath alpha strike is either a salvo of +1/+0 haste'd one drops or a couple Hellsparks to the face, so in that regard, Hellspark is the better choice than Geopede. The Landfall guys were super-powerful when they were online, but they just weren't online enough to be consistent. One Lynx is in there so you can hold back a Fetch Land in the mid- or late-game, tutor him up alongside a Bushwhacker and have a 7-damage play even if your Ranger of Eos dies.

The other question that gets asked often is in regards to Goblin Guide's "drawback". There were multiple times where the info gleaned from his attack trigger was extremely valuable. It's very cool to know that they're about to draw a Wrath of God, and since it's not a "may" trigger nor can they manipulate the card in any way if it's not a land, the information will always be good. It can sometimes be dangerous to ship them free land, but in general the Guide is so punishing that it doesn't matter. In another deck, he might be less effective, but in Boros Bushwhacker he'll often do 8-10 damage. The threat density of the deck is ridiculously high and almost every threat has an immediate impact on the game.

The removal suite was specifically chosen to never be fully dead. Path to Exile is in the sideboard because it cannot go to the opponent's face. It is a necessity when facing Baneslayer decks, but the starting 60 is tuned to deliver 20 damage as fast as it can. Harm's Way has been an All-Star thus far, making combat a dangerous proposition for the opponent. Many a game has been won by Harm's Waying a blocker's damage back at its controller. Lightning Bolt has also been dominant, but that goes without saying. Burst Lightning, however, has been off the charts. It's disposable early, which means you can do things like kill 2/2 First Strikers and mana accelerators, but late-game it hits very, very hard. It can take out 2/2 First Strikers that have grown via Honor of the Pure, and it can simply take a large chunk out of an opposing life total. The 12 removal spells maindeck are only viable because they can give you ridiculous reach out of nowhere. It's not uncommon to see an opponent at 14 or less by the end of turn 2, nor is it unreasonable to see them well below 10 by the end of turn 3. The burn then shifts from removal to direct damage and ends the game before they've even had a chance to develop a board.

The deck is fast, efficient, and recovers from removal very well. It is not without flaws, and has a difficult matchup against white Soldier and Weenie decks, especially those curving out with Baneslayer Angel. The games are winnable but almost every facet of their deck is designed to beat yours (intentionally or not). Ranger of Eos is one of the most powerful things you can do in Standard, and its arguably better than Bloodbraid Elf due to its supporting cast. The deck can appear board-committed at times, but as long as you've got a Ranger in the grip, you won't get blown out by a Wrath. It does not mulligan especially well, as lowering the threat density of an opening hand takes some of the punch out of the deck. Thankfully, it also does not mulligan especially frequently, owing to the density of one-drops. It can win a game without hitting a 3rd land drop, so when testing it, do not mulligan unless you have zero action. If you've got two lands, a castable 1 and 2 drop, and some burn, you keep without question. The deck can win off 6 or even 5 cards, but it is often better to be land-light for a few turns than to go down a card, especially when you're playing first.

Overall Boros Bushwhacker can develop an enviable board position while other decks are still trying to fix their mana. The deck does more with it's first 3 turns than any other deck in the developing format, and it would not be a stretch to see this deck as Tier 1. If you're playing in the Star City Games 5K Standard Open in Philly this coming weekend and need a deck, try Boros Bushwhacker and let us know how it runs for you. It's not too hard to play, it's amazingly fast, consistent and powerful, and it's fairly enjoyable to boot. I'll answer any questions about the deck in the comments below, so ask away!