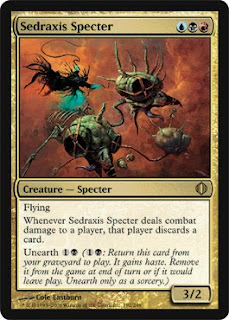 Last week, the Star City Games Open Series started off with a bang in St. Louis. With over 300 players in attendance, it was a good day to play magic. After a long day of cardslinging, a winner was finally declaired! Richard "Aaron" Wayne took Red Deck Wins deck all the way to the top, showing the world that Jund, while still the best deck in the format, has a few weaknesses.

Taking a look at the Top 8 from the St. Louis 5K, the first thing to notice is the two red-based aggro decks that played for the final prize. In a metagame filled with Jund and decks made to beat Jund, it is easy to see why such a fast, resilient archetype was able to make its way to the top tables. Jund is essentially a midrange deck. It can take two distinct forms: a blazing fast aggro deck with Leech, Blightning, and Bloodbraid Elf, or a pseudo-control deck that slowly takes over the board on the back of Maelstrom Pulse, Bituminous Blast, and the always powerful Broodmate Dragon. No matter which route Jund takes, Red Deck Wins can out-race and out-burn it. Hellspark Elemental, Hell's Thunder, and the rest of RDW's creatures make Jund's removal look silly and can drop Jund into burn range before any relevant threats can hit the board. With its lightning fast starts and the unearth mechanic to recur threats, Red Deck Wins will likely see an increased amount of play in standard and will almost definitely make its way to the top tables if Jund continues to comprise almost half of the metagame.

The other red aggro deck that showed up in the finals was Barely Boros. This deck is essentially a mirror of the RDW list with a splash of white for Ajani Vengent in the main deck and Path to Exile in the sideboard. This deck can match RDW in both speed and power, but has the ability to deal with more threats thanks the white splash. In a vacuum, Barely Boros is probably a stronger deck than RDW, but its strength comes at a cost. Boros is not as consistently fast as RDW, which is arguably the fastest deck in the format. Even a deck that can match its speed can't match its ability to consistently end games in the first few turns. 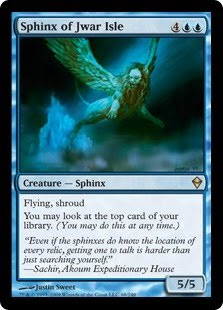 Recently, blue has been criticized as being underpowered and unplayable but the two identical Grixis Control decks that showed up in the St. Louis Top 8 proved that blue is back on its way to the top. With the increase in aggro decks, it is no surprise that more and more players are switching over to control as a possible answer. This list works a lot like the Wafo-Tapa Cruel Control list that showed up at Worlds '09. Your early game consists of keeping the board under control with counterspells and removal and drawing plenty of cards with Divination and Courier's Capsule. Your ultimate goal is tosurvive long enough to cast the game ending Cruel Ultimatum. To help survive long enough to cast Cruel, you have the insanely powerful Sphinx of Jwar Isle to either play defense or even go on the ranpage to end the game in 4 quick swings. Shroud is absurd in this format and makes the 5/5 Sphinx even more powerful, as it can't be destroyed with traditional removal. Grixis Control has potential to be a foil to the aggro filled metagame, and will almost definitely see an increase in play thanks to its Top 8 appearance.

Overall the metagame will stay relatively unchanged. Jund will still be the deck to beat. It will still make up about 40% of the field, and will continue to make Top 8 appearances. However, as the St. Louis 5K has shown us, there are plenty of decks out there that can give Jund a run for its money. The lightning fast red decks (RDW and Barley Boros) and the tried and true control lists (Grixis Control) will both increase in play and could be a temporary answer to Jund until Worldwake can come along and potentially bring powerful anti-Jund cards into the format.

For the financial side of Magic, here are a few cards that you would be recommended to grab before their prices increase:

Sedraxis Specter: Originally only played in the "Dredge 2.0" a.k.a. "Crypt Crab" combo decks, the Grixis colored Hypnotic Specter with unearth has recently seen play in many Jund lists as well. Sedraxis Specter is essentially another Blightning, as it takes one card to kill it, then it can be unearthed, attack for 3, and force another card out of your opponent's hand. It also applies early game pressure and hand disruption against decks that are removal light or slower on the draw.

RDW and Barely Boros Rares: With the rise in RDW and other heavy red aggro decks in the format, expect Hell's Thunder to rise in price along with Goblin Guide, Ball Lightning, and possibly even Earthquake (as Earthquake has also seen play in most variants of the increasingly popular Grixis Control decks).

Felidar Sovereign: When spoiled, Sovereign was immediately speculated to only see play in casual decks. However, this dollar rare mythic has seen play in many mono white decks, usually alongside Baneslayer Angel and Wall of Reverence. His ability of winning by reaching 40 life is much more relevant when you have such powerful lifegain. Expect this card to rise in price if Mono White Control starts seeing more play.

Emeria Angel: Another archetype that showed its strength at the St. Louis 5K was G/W(/x)  Tokens. With a G/W/b list making it to the Top 8, expect Emeria and other staple cards from the deck to rise in price.

For additional information about the St. Louis 5K results and the Top 16 decklists, be sure to check out http://www.starcitygames.com