Hi folks, this is Russell from Gwafa’s Bazaar with a guest spot for all you fine readers of Quiet Speculation. As Magic’s biggest ever year draws to a close, it’s time to look back and see what we’ve learned along the way. For card speculators, that means reviewing surprise hits and over-hyped flops. I’ll look at the top 5 of each, but feel free to chime in with your own hits and misses in the comments below! 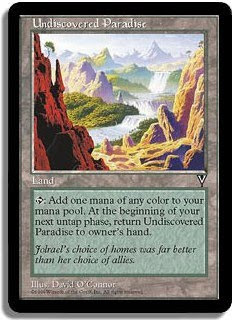 For every card from new sets that makes its way into the eternal formats, there are just as many hidden gems from old sets that find a home. Because of their generally lower circulation and the number residing in the collections of lapsed players, their price can skyrocket in a matter of hours. Undiscovered Paradise was appropriately named until Bloodghast appeared in legacy Dredge lists. It remained undiscovered, and trading for a dollar or two, but now a playset will set you back around $50. With the Star City Games Legacy $5k events happening throughout 2010, this land not likely to fall anytime soon.

A fine example of how metagame shifts affect card prices, the rise of white-based token decks in early 2009 showcased the previously unrecognised power of Windbrisk Heights. Card advantage and free spells? Overrun at instant speed? Yes, please. The "Hideaway" mechanic was scorned when Lorwyn first appeared, and people at prereleases groaned about opening these. From the dollar bins to a high of nearly $20, rotation has seen Heights take an inglorious tumble back to its previous budget price. Its meteoric rise demonstrates just how easy it is to miss a future format staple.

Lands, lands and more lands! While the value of dual lands is usually obvious from the get-go, unique lands like these are often sleepers, and none slumbered more deeply than Dark Depths. A casual favourite from a rubbish set, Dark Depths was worth a few bucks at the start of the year. Zendikar’s Vampire Hexmage turned it into a busted extended tournament rare, and the price shot past $25 around Pro Tour: Austin. Hexmage/Depths is a real deck, even showing up in legacy, so don’t expect this land to drop in price in the near future.

‘Why did they print this card?’ was a question asked by many players when M10 emerged, and it’s a question that should be asked of every new card. A savvy speculator would have noticed that Vampire Nocturnus is not your average lord. It’s a mythic rare, and if there were more vampires to come it would be very strong and in demand. Casual players love tribal decks and everyone loves vampires! Reasoning that they must be printing more vampires, since giving flying to a tribe of fliers is silly, playsets could be had for pennies. With more vamps to come in Worldwake, the mono-black decks could become top-tier, at which point this guy’s price would go slightly higher. 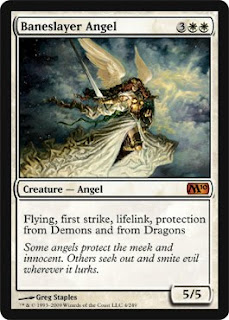 Nobody thought the marquee mythic of Magic 2010 would be a sleeper hit, but somehow Baneslayer has managed it. Kelly has already discussed the perfect storm that formed around her – set in short supply, casual appeal, tournament powerhouse. Starting at around $15, Baneslayer has only gone up from there by threatening to dominate standard, extended, and kitchen tables everywhere. She saw the biggest jump after Ben Rubin and Brian Kibler built a pro-tour winning deck around her, and she is now trading at Tarmogoyf prices with little hope of a price dip even if she rotates out in M11.
[Note: For a few hours, Baneslayer Angel could be pre-ordered from Star City Games for $7 each. Dang. -KBR]

People are still having trouble properly valuing mythic rares. The promise of a huge dude for five mana got some people very hot under the collar, and this card started up around ten bucks. No evasion and no way to protect itself made Lord of Extinction just another fatty, and one has to wonder if they printed a 1000/1000 creature for five mana, would it see play? Probably yes, but that doesn’t save Lord of Extinction from the bargain bins.

Heralding the new, powerful, tournament worthy core sets was Silence. Orim’s Chant in standard? Unbelievable, get your preorders in now! White Weenie was theoretically amazing, but it hasn’t panned out that way, and Silence didn’t even show up in Rob Dougherty’s Worlds WW deck, or Joel Callafell & Kenny Oberg’s fog deck. Fittingly, the card hasn't even been mentioned in months and it seems to have sunk without a trace from an initial price around $10.

A tournament worthy legendary angel at mythic rare, Jenara should by all rights have taken the same path as Baneslayer Angel. Starting in the mid teens Jenara has seen an inexorable slide as people found out she wasn’t as tournament worthy as first thought. Bant decks have generally preferred Rhox War Monk as the big rhino eats Lightning Bolts for breakfast and blocks Bloodbraid Elf all day, and as such, Jenara has settled at around $3.

A reprint of a previously powerful, expensive card seemed like a sure winner and both ARB and Planeshift Meddling Mages went up to $12-$15 in May, even amongst the furor over printing an invitational card without the invitational portrait in the art. A hostile standard metagame full of red burn spells has seen that figure tumble to below $4 at present, though it could see a bounceback now that extended season has rolled around. Picking some up these days is not a bad idea. 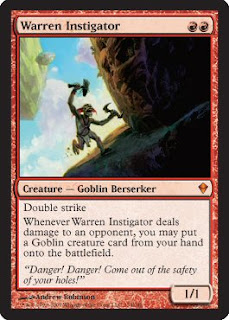 Heralding the doom of magic once again, Warren Instigator was all the proof a lot of watchers needed that "Wi$ard$ of the Coa$t" was printing more and more busted mythics that weren’t legends, weren’t planeswalkers, and weren’t what we’d been promised at all. Goblin Lackey is $10 at uncommon, and here was a mythic double-striking version! This guy preordered above $10 but dropped very quickly when people realized Goblins weren’t going to make it in the current standard environment. The magnitude of the price drop is not why he makes the list. It's the hype and the wailing and gnashing of teeth that surrounded his reveal. Mindbreak Trap was much the same story. People were speculating that both would be tournament staples, and nothing has been farther from the truth...yet. We already know there will be more new goblins in Worldwake and if they become a factor, Warren Instigator will certainly play a main role.

In success and failure, one can always learn lessons. First, mythics aren’t as rare as people thought they would be. Tournament playabilit
y is still the most important part of a card’s value and a decent standard rare is still going to be worth much more than the Mayael the Anima rotting in your trade folder. Second, cards that do unique things are worth acquiring, just in case. Especially lands. Third, don’t believe the hype. For every Baneslayer Angel that starts high and just goes higher, there is a Jenara, or a Meddling Mage, or a Warren Instigator to blow out your wallet. Unless you personally have a sick read on a card and can justify its astonishing power and place in the metagame, don’t buy the expensive singles at release. They usually come down after a few weeks.

Finally, when you’re considering new cards, consider why R&D chose to print them. Mark Rosewater tells us constantly how R&D thinks about the game, and they aren’t just printing any old junk they feel like. If a card doesn’t make sense given the cards around it, like Vampire Nocturnus, it could be a mistake, but it's more likely it could be a sign of things to come. Then again, it could be a sick joke, like poor old Halo Hunter. Lullmage Mentor doesn’t make much sense considering how bad counterspells are at the moment, so maybe we should expect more of those coming soon.

I hope you’ve enjoyed this look back at 2009. The tournament scene is healthier than ever, smaller set sizes have brought rare prices down, Duels of the Planeswalkers is bringing thousands of people back to the game and the Wizards branding department has done a stellar job getting people excited about the new sets. 2010 promises to be just as good, with an extra large set in the shape of Rise of the Eldrazi and a ton of new Star City open tournaments to go along with the usual DCI gigs.

What would have been on your Top 5 lists this year? What great trades did you make in 2009? What "sick reads" did you have in the past 12 months? Sound off in the comments!

You can follow Russel Tassicker on his twitter feed and read more of his work on his site, Gwafa’s Bazaar!