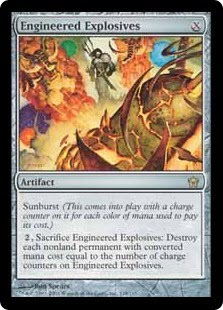 After this weekend's Standard and Legacy 5ks in St Louis, the next major tournament on everyone's mind will be the Extended PTQs coming up after the turn of the year.  It is safe to assume most PTQers will be parroting the top decks from Rome this year.  If that is the case, players planning to play in these events should already have their cards socked away.

It seems, however, that card availability is becoming an even bigger problem.  Some extended decks call for four copies of both Baneslayer Angel and Tarmogoyf - an insurmountable barrier to entry that many players simply cannot fathom.  Looking at the non-Zoo decks, there are a few cards that seem to preside over the format.

Engineered Explosives, which lists at $15 on most major dealer sites, is selling for about the same on Ebay.  Unfortunately, Explosives are so important to the format, you cannot afford to skip a playset.  Since the Ebay and Dealer prices are so close together, it could see a small rise in price, especially if the Tezzeret deck posts high finishes at the first few PTQs.  This is not an investment-grade opportunity, make no mistake, but if you haven't gotten your EEs yet, there won't be a better time.  The best time was in the Fall, but most people can't afford to blow out their Standard stuff for Extended when they have FNMs to go to.


Chrome Mox is in a similar spot to EE.  While not as widely used, it is crucial to the Tezzeret decks that have taken the format by storm, as well as things like All-In Red that some people claim to be playable.  It's the least fair mana accelerant in the format, and it's selling for $20 by the dealers.  The Ebay disparity is wide here.  Playsets which sell for $80 are closing between $50 and $60 on Ebay.  Like EE, you'll almost assuredly need these for 1x and getting them at a discount is the way to go.  You won't double up unless something truly remarkable happens, but you could potentially play half a season and then make 50% if you decided to sell out.

Chalice of the Void is also an artifact.  And it's also expensive.  Blame Tezzeret and his Mirrodin buddies.  It's the most reasaonably costed of the big three right now, dealering and ebaying for $10.  Chalice isn't quite as important as Engineered Explosives, but almost every deck packs 3 sideboard or main deck.  They can see a top end of $15 mid-season, so prioritize the other cards accordingly.  If you're the type that hates borrowing cards, you're buying at the right time.

Meddling Mage is relevant again!  A full 12 of the 5-1 decks from Worlds' Extended portion ran 3 or more Mages in their 75.  You'd think someone would have noticed.  Playsets sell for $24 from Dealers, but on Ebay, sets can be had for $10-12.  That's what I'm talking about!  Let's see, staple Extended card, third set, former chase rare...that adds up quite nicely.  Get a set to play and a set to trade, ship the extra set at a PTQ, and play for free.  That's how we do it here.

Cryptic Command, my how the mighty have fallen!  I remember hunting down my playset after getting back into Magic and how much of a pain it was.  $20 felt cheap.  Now, playsets can be had for a touch above 20.  There's a phenomenon that can happen from time to time - cards that used to be expensive can get expensive much faster than normal cards.  These "anointed ones" are like former top prospects in Baseball.  A few good games has all the media buzzing again, wondering if Cryptic Command is "back".  You'll need a set for some versions of the Tezzeret deck, where it is very good indeed.  It's so ludicrously inexpensive right now, you'd do well to get a set socked away, if not more.  Remember your target demographic here - people who didn't plan ahead and are scrambling to get 4 rares from a set that hasn't been drafted since late Summer 2008.  You can make money here.  Expecting them to outright double is a bit much, but steady gains over the course of the next month and throughout the PTQ season are reasonable to expect.  The ebay disparity is massive right now, since they dealer for $10.

Hallowed Fountain has been the most-used Ravnica land, next to Stomping Ground.  The demand for Fountains has already surged on Ebay, but you might still find some discounts.  Try to trade for those and get as many as you can find.  They'll be as good as cash on PTQ day.  Vendilion Clique has made an appearance too, but dealers don't seem to have adjusted.  They can be had for $4-5 at the dealers, and Ebay is about the same.  A lack of an Ebay disparity can be a strong indicator of card strength going into a season.  Clique is really a stand-out card and has an outside chance of hitting $10, but it's unlikely.  It's a card to hold for the long-term if you can get a stash of 'em cheaply.  It's only going to get more rare, since it's effectively from a third set due to the structure of LRW-SHM block.