Although not 100% exclusive to Quiet Speculation, we've been granted an early peek at some spoiler cards!  We'll have an EXCLUSIVE card before the prerelease comes along, but for now, these should whet your appetite. 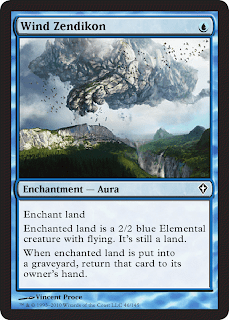 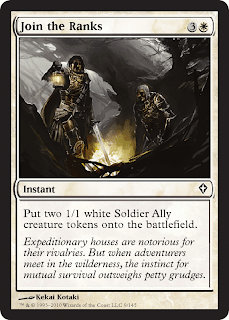 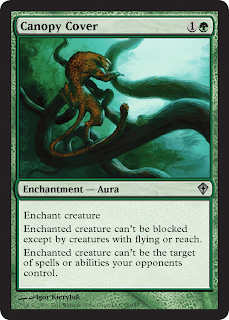 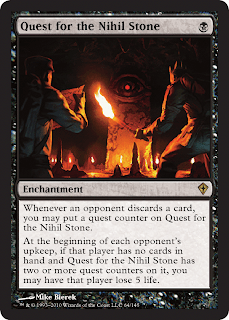 Wind Zendikon: I had been discussing the interactions with Fetch Lands with a few people via AIM and Twitter and our main thought was "wouldn't it be nice if there was a 1-cost Zendikon"?  This allows aggressive decks to get multiple Landfalls in a turn easily by turning a fetch land into a 2/2 flier.  Sacrificing the fetch land, recurring it with Wind Zendikon, and replaying it gives decks access to 3 Landfall triggers in a turn.  The potential is endless, and at worst, this card is a 2/2 flier for 1U.  Might not have a home in Standard, but should be a high draft pick and has a ridiculous amount of synergy.

Join the Ranks: This card used to cost 1W when it was in Mirrodin, but by giving the creatures an Ally subtype has serious implications in Limited.  It's probably too slow for Constructed, although the milling Ally will pair naturally with Join the Ranks and Hedron Crab.  In Limited, it's a combat trick with potential for good synergy.  It gives the Ally draft decks something to look forward to in pack 3.

Canopy Cover: It's pretty unexciting, but turning some creatures into a Silihana Ledgewalker can be deadly.  Auras rarely see constructed play, but expect this to be a nice late pickup in Limited.

Quest for the Nihil Stone: Well hello there.  My name's Blightning.  What's a pretty young thing like you doing in a dump like Zendikar?  Why don't you come on over to Alara.  We can have a nice glass of Mind Rot and then maybe I can un-Duress you.  Don't mind the Rotting Rats, my cat drags them in.  Making players discard cards is usually not difficult, especially considering the Jund deck's main killer, Blightning.  Whether it fits in Jund or not is debatable, but with access to the discard named above and Sedraxis Specter, Scepter of Fugue and Esper Charm, keeping your opponent's hand empty is not entirely too difficult.  It lacks the leniency of The Rack, which would do a modest amount of damage if their hand was only kind of empty, but the fact that it Lava Axes your opponent each turn for not having cards is really fabulous.  This also has natural synergy with Bloodchief Ascension, so we may see this combine with cards like Megrim and heavy discard.  Casual players are sure to go wild for this card, but it's entirely possible to see it in Tier 1 decks at the post-Worldwake 5K tournaments.  This is one that I'll be pre-ordering aggressively.