Learn More
Sign Up
What a treat!  Baltimore native John Ugalde wrote us a nice little piece about his experience getting into Legacy, which seems to be surging in popularity lately.  Today's piece sets the stage for his tournament report, which will be published shortly.
------- 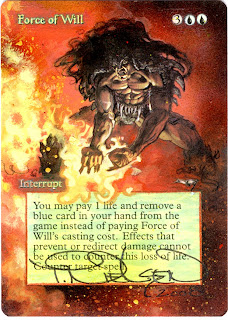 With Star City Games hosting the Open Series Invitationals, the Legacy portion of the 10Ks has sparked great interest in the format. This is being demonstrated by increased attendance in Legacy events and a higher price on Legacy staples as well. If you have interest in playing Legacy, or even Vintage, now is the time to begin investing. Cards such as Force of Will, Tarmogoyf, and even Stifle are steadily rising in price. Once SCG announced that there would be a Legacy day at each SCG Open, I immediately sleeved up my all foil, altered art, signed by God Himself, Countertop 'Goyf deck.  It's a Bant-colored archetype abusing Sensei's Diving Top and Counterbalance synergy to create a soft lock and "get there" with low-cost creatures.
Sadly, the cards weren't all signed, nor foil.
In actuality, the deck did not even exist.
I was ready to invest in the eternal goodness of Legacy, where a 5/6 costs 1G, being tapped out means nothing, and where Ad Nauseam is actually playable. After doing some research on the popular archetypes in the format, I found out there wasn't really a Boogey-man (see Jund in Standard) deck to hate out. This showed me one of the great aspects of Legacy; there is no such thing as THE deck to beat. There are a wide variety of archetypes to choose from, each having strengths and weaknesses. The three types of decks are well balanced between Control, Combo and Aggro, and with a super-silly amount of cards to choose from, there is a large variance in what you'll see in a given tournament. I began meeting with local Legacy players, asking them what they felt was a good deck to break the ice with, and play at upcoming local tournaments. They insisted a combo deck would be a good choice since the decks are relatively easy to pilot, and it often just builds towards one specific goal.
I didn't listen to them.
Since tapping the card, 'Island' was one of my favorite pastimes, I decided to build the U/G/R Tempo-Control deck known as 'Canadian Threshold' or 'Tempo Thresh'. This deck features 8-10 creatures, 18 lands, plenty of cantrips, removal, as well as counterspells to get yourself to your end game, while your opponent scrambles to get off their feet.
'Tempo Thresh'

Though the deck's cost is around $850, most if not all of the cards can be used in other archetypes within the format. Dual Lands, Tarmogoyf, Force of Will and Wasteland will be the biggest investments. But they are just that - investments. Shelling out a few bills for decade-old cards will not be a common occurrence. Unlike standard, Legacy cards never rotate, meaning my Force of Wills will continue to pitch a blue spell for a free counter in years to come!
When I began building the deck, I was fortunate enough to have a friend that was looking to sell his collection. I picked up Force of Wills, Tarmogoyfs, as well as several out-of-print un/commons from him for a disgustingly cheap price. I was also able to find $1+ commons, in the commons bin at my local card store for $.10/each. If your local shop has a un/commons bin, it is worth the 15 minutes to rummage through for cards such as Brainstorm, Ponder, Daze, and Lightning Bolt. In the weeks following, I checked eBay, my brother's collection (Sorry Joe), and the backs of binders at FNM to complete my deck. Often times you'll find non-Eternal players more than willing to trade their "old cards" for Standard goodies. Do that. Do that often. 2 Day of Judgements and a Meddling Mage is much easier to acquire than a mint FoW.
This all being said, Legacy is becoming a format certainly worth investing in, and I am very excited to dive deep into it. Tomorrow, I will give a report on my first sanctioned Legacy tournament, and explain some budget-friendly archetypes that are viable in Legacy.
Hoping to never skip the Draw Step,
John Ugalde