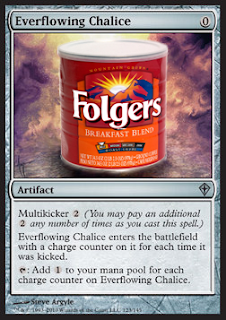 Last time, we ran through White, Blue and Black.  This time, we'll finish off the review with Red, Green, Artifacts, Lands and all two of the Multicolored cards.

This little fellow is going to be very popular at EDH tables - too bad he's not legendary!  There have been goofy decks floating around that try to win games in Standard, but any deck that revolves around a 2-cost 1/1 without any form of shroud or haste is probably in bad shape.  A hair above bulk only because of EDH.

It seems that the decks that would use this already have an effect that they'd rather use.  It's going to see some play, especially in sideboards, but it won't be a high-dollar rare due to its narrow scope of use.  It'll be something in the 3-4 dollar range.

Kazuul, Tyrant of the Cliffs

People seem to love the concept of Big Red decks, but they just don't usually seem to have the tools.  If they ever did come to the fore, they'd likely run 2 copies of this badass.  As it stands, he doesn't really have a home outside of Limited, where he's a Grade-A beatstick.  He was mildly popular at the pre-release but most people have realized he's just not that good.

You don't know the full breadth of your vocabulary until you try to describe how badly this card blows you out in combat.  I could see this being a massive tempo swing against a Boros-style deck, or perhaps against Eldrazi Green in its early turns.  Having been nailed with it in Sealed, it is truly impressive how inexpensive a 12-toughness Ball Lightning can be.  It feels awkward to play with, and is easily telegraphed, but if you manage to cast this in combat, you'll kill an attacker and almost assuredly get in for a bunch of damage.  The card's under-rated but probably not undervalued.  Look for it to find a home somewhere.

These have been selling fairly well, despite being the prerelease promo.  Some control decks are playing 2 copies of this instead of Earthquake, and it's easy to see why.  The card is totally devastating when the game runs long, and has the ability to wipe the board and go to the dome at the same time.  The price should stay low due to its promo status.

So much has to go right for this card to not suck.  It's got the same affliction as Scute Mob.  It's probably over-rated right now at $8, but it's the kind of romantic card that Johnny type players simply adore.  It might find a home in Bushwhacker if Bushwhacker was still a good deck.

Noble Hierarch this is not.  We've been trying multiple configurations of the Ally deck, and most of them suck.  The most promising ones still just fizzle out after one big turn and scoop it up to any removal.  Keep an eye out for some better Allies in Rise of the Eldrazi, because the druid can fuel some absurd turns.

While a good mono-green deck has yet to rear its head, rest assured that he's a 4x in every single one of them.  He's actually one of the most promising cards in the set, giving green a way to mana dump AND giving them an extra Elf lord.  He's appropriately priced at $6 right now, since Elves are popular regardless of tournament play.

Bulk rare for constructed, but the damage this can do in Limited is truly shocking.

See "Strength of the Tajuru".

This guy's really insane.  He's got massive synergy with Master of the Wild Hunt, since he poops out Wolf tokens, and he works well with Elvish Archdruid to turn your otherwise fallow mana into something productive.  He's at his worst unkicked, when he's "only" a 4/4 for 2GG.  Remember when that was considered "aggressive"?

My oh my, does Timmy love this jolly green giant.  He's sitting pretty atop the $10 spot right now, and hasn't anywhere to go but down.  There are just far too many ways to kill a vanilla X/X green creature, and most of them are played by Jund, Grixis or UWR Control.  Fun though he may be, he reminds me a lot of Lord of Extinction.  Hyped at first, but not truly a good card.

Minds far superior to my own will find, and actually have already found, ways to break this card in half.  It will likely be Extended or an Eternal format that houses the broken deck, since Standard doesn't offer too many ways to abuse Amulet.  This is one of those rares that'll hover between $3 and $6, but foil copies for Vintage players could fetch significantly more in time.

Aside from the Red deck I saw that used this with Orcish Artillery to absolutely obliterate the opposing board position, there are applications for Choose Your Own Nighthawk in almost any aggressive deck.  I could even see this as a 2-of in Jund, where it makes your Siege-Gang Commanders and Masters of the Wild Hunt into life-gaining machine guns.   There's too much potential in this card to remain unplayed, but it's not on par with Sword of Fire and Ice or Umezawa's Jitte - the most expensive equipment.  Still, it will remain one of the best rares in the set for all around versatility and use.

The Man-Lands are, on the whole, some of the best dual lands in Magic.  Second only to the Ravnica and Original duals, the amount of value these provide puts the Urza's Legacy man-lands to shame.   Colonnade has found a home in the URW Control decks, where it provides the threat density the deck had been lacking.  It is one of the better lands in its appropriate deck.

Having taken up residence in Grixis Control decks, my very own preview card has been impressive.  It doesn't have the stopping power of some of its brethren, but once you've ground out a war of attrition, a few hits for 3 will likely be all you need to get them into burn range.  Seriously good, seriously under-rated.

I was wrong when I tweeted that Lavaclaw Reaches were better than Raging Ravine in Jund.  Having playtested it, Ravine has almost been unilaterally better, and I've cut my Lavaclaws entirely in favor of Ravines.  This belongs in a faster deck with smaller spells, where it would shine.  Since a deck like this would  be playing second fiddle to Jund right now, it will likely be the least sought-after land from the set.

See Lavaclaw Reaches.  This card is an absolute monster in Jund.  If the deck's enemies thought their removal was spread thin before, wait until they need to start sending LANDS on a Path to Exile.  Deceptively good, especially since Jund can often wait until the later turns for double green and red.

Better than I originally gave it credit for.  4 toughness is pretty excellent in this format, and the price is certainly right.  The Wildwood was performing well in a Doran-colored midrange deck, but the deck was just not quite "there" compared to other midrange decks.  Another star without a home.

Pricing this card has been a chess match.  Most people are smart enough to figure out that they've printed this card for a reason, but no one knows exactly what Eldrazi spells will look like.  It's pure speculation, and that alone has caused it to remain a $5 card.  That price feels correct, since it accurately reflects the risk/reward of the situation.  It's unlikely that it would hit more than $10, simply because it's unlikely that a deck will run more than a few copies of the Legendary Land.  By selling at $5, you have an equal chance of selling a junk rare at a normal rare price, or selling a high-quality rare at half-price.  I'd still acquire these on the cheap if someone values them at Bulk rates, but don't go out
of your way to get them at $5.

Coolness Factor: off the charts.  Playability in Tournament Magic:  Low.  He has already won many a game as an EDH general, since his enormous size, evasion, and triggered ability together make Hell on earth.  He hasn't got the same devastating effect on the board as a Baneslayer Angel, and is in general too fragile in a world of Terminates, Pulses and Paths.  Get a foil copy for EDH before everyone realizes how sick of a general he really is.

I have almost no opinion on this card other than "oh look a Mythic fatty".  Limited Bomb, Constructed Unplayable.  Might trade well to EDH players and small children.

Were he a 4/4, he'd be completely nuts, but as a 5/3, he's merely "very good".  Vintage decks are already cooing over their new Jugg-o-Sphere, and even Standard Esper decks are making use of the crippling beater.  The Sphere effect can really put a damper on the opposing strategy, and multiples are devastating.  It's a shame that land destruction is so bad these days, or he'd be even better.  Bear in mind that foil copies are already $20+ due to Vintage decks.

This is an EDH card if ever there was one.  It's far too slow and plodding for Constructed, but will fit right in next to Horn of Greed in EDH decks.

That wraps up the Worldwake Rundown!  The set feels rather weak as a whole, but has some extremely powerful cards.  The Dual Manlands are an unprecedented level of awesome, and will be format staples for years to come.  Don't forget that we're going to start seeing less and less Worldwake being opened as we approach Rise of the Eldrazi.  That will have a larger impact on prices than most people realize.  Look at Conflux as an example - Noble Hierarch and Knight of the Reliquary are seeing more and more play, and they're becoming very hard to find.  This is not a new phenomenon, so be ready for it this time and stock up on the best cards.  I know I'll be snapping up Man-Lands like a fiend at my store.