Hey everyone!  It's been a while since I've had a chance to sit down and do some writing for my own site.  As those who follow me on Twitter will know, I've been quite the busy bee lately, having opened my own retail game store.  We focus on Magic: the Gathering right now, with plans to expand to other games once we've got our feet firmly on the ground.  We're called Dragon's Den, located in Lafayette, Indiana (look us up on Facebook!)

I wanted to take a moment to share some insights from the other side of the table, as it were.  I'm hardly pushing the volume a dealer like Star City Games does, but the dynamics of the business are, at their core, very similar.  I allow players to sell me just about any card, and my prices are much more dynamic than the other local stores.  To give you an idea just how dynamic, I don't even own a price gun.  There's no reason to sticker a card when its price could, and does, change daily.  My buy prices reflect the card's current price, my stock of the card, its demand in the local market, and my overall ability to convert it into cash.  Players who trade with, or sell to, the store understand that on a given deal, the house really has to win.  This is because I have overhead expenses, and individual traders do not.  It's funny how many people don't seem to grasp that concept, regardless of the size of the dealer.

I wanted to pop in and deliver a few lessons that every-day traders can learn from some of the methods of a small card shop, which have been derived in part from the operating procedures of the larger dealers.

1) Know your Market/Metagame!  This is a no-brainer, but it bears repeating.  I have not stocked a Vampire Nocturnus for over 3 weeks.  They just disappear and turn into cash as soon as they arrive.  When I'm trading, I go out of my way to snag them.  If someone's reluctant, I will slightly over-pay for them since I know that $0.5x in margin right now is better than $1.0x margin never.  If you're trading for a hot card that you KNOW you can move at high value/profit, don't be afraid to grease a few palms with extra cardboard to get it.  You know buddy Dave is DYING to get an Elspeth, but is the guy trading it to you not sure whether he wants to come off his copy?  Throw in an extra $5 rare, citing the fact that you're willing to give him "more than book value".  This tactic, if it can even be called a tactic, will facilitate many trades.  That $5 rare may never move, rendering its value $0.  Then you turn around and flip Elspeth for a massive profit to your buyer in waiting!

2) Develop good relationships with everyone, and always have some standing offers people can take advantage of.  My unwritten motto in my shop is that if I haven't got it in stock, I'll bust my ass to find you a copy.  I had a customer call me asking for, shockingly, two copies of Elspeth.  I hadn't any.  I also had a customer who had left his collection with me to price out and consider selling.  He had two copies of Elspeth.  Because I had standing offers on the table (I'll find you any card, and I'll always buy your stuff), I was able to make two phone calls and orchestrate a deal.  I didn't make a lot of money on the deal, but I made a couple bucks that I wouldn't have otherwise.  More importantly, both parties now know me as a facilitator, one who will work with them to achieve their goals in Magic.

By maintaining these relationships, many doors you cannot see will open up.  I have had customers tell me that I'm the first person they talk to when they want to sell cards because I always have cash and I'm not picky about what I buy.  Much of what I buy is bulk - commons and uncommons, crap rares, etc, but I have my reasons for picking those up.  What reasons? 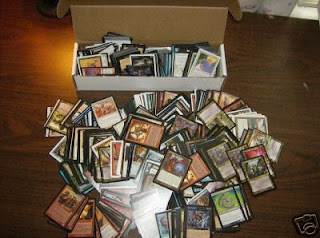 3) Bulk is your friend.  There's a reason that every major dealer has a per thousand buy price on bulk cards.  There are a few, actually.  In my neck of the woods, there are a lot of collections that sit around attics for ages.  Most players don't want me to go through 10,000 cards and price them individually, nor have I that kind of time.  They usually bring me a binder and a few 5k count boxes.  I'll price the binder out, then quote them a bulk rate on the box.  The good stuff goes into the display case, and I root through the 5k boxes for any hidden gems, of which there's almost always something!

Since the cost on bulk cards is astoundingly low, it takes very few to make back your investment.  Obviously, finding a Wasteland is the dream, but most often it's the 25c boxes that do my heavy lifting.  Players love these.  There's an air of treasure hunting to digging through the quarter box.  EDH players in particular love that there are cards they may have never seen before.  Selling 8-10 of these pays for a thousand bulk cards, so the margin is high even though the turn-over rate is low.  Still, at absolute worst, smaller shops often sell their bulk to larger dealers who can move the inventory faster.  Thus, everyone along the chain wins.  The end-user gets money for cards they don't want, the small store makes its margin and serves its customers, and the large dealer gets more stock to do with as it sees fit.

Bulk rares are even better.  Most places put bulk rares on buy at $0.10 each, which is what I do as well.   This reflects, once again, the low chance of turning over a given rare.  I throw these rares into the dollar box, so if you do the math, you'll see that once again, my margin is super-high, but mitigated by turn-over rate.  These fixed-price boxes have been wildly successful.

The take-away for the average trader is this: put together a $1 binder!  Tell people you'll trade for bulk rares, or even buy them, at the standard 10 cent rate.  Many people will take you up on this.  Throw those rares into a $1 binder and use that to make up ground whenever a trade is "light" on one end, use them for good-will trades to garner favor amongst friends, and just generally trade them up.  This also goes for current-format Uncommons and Commons.  Many people will give them away, but that's like giving away money.   Have a separate binder or box for them and include them in your trade stock!

In general, the practices that apply to a store apply to a solo trader as well.  You don't have the luxury of a large space to store and display inventory, but there's nothing that says you can't be smart about what you take to tournaments and conventions and trade like a mad-man!

5 thoughts on “Lessons In Store”