As many of you know, I've been very, very busy.  I run this site, which has gone slightly neglected from time to time, I write for ManaNation and MTGO Academy, run the Dragons Den in Lafayette, Indiana, and from time to time, I've been known to actually play a game or two of Magic.  Combining this with my new life initiative to get serious about my health and fitness again, which entails spending a lot more time each day in the gym and cooking (rather than slamming burritos at Taco Bell), my free time is at a serious premium.

That being the case, I was presented with two options:  let this site sit fallow and slowly fall into disrepair, or find a way to take some of the workload off of my own shoulders.  Clearly, I'm not about to let this site slip.  I feel awful when I don't update it regularly, so I did the only logical thing I could think of: I got someone sharp, trustworthy and knowledgeable to work with me on editing the site!  Don't worry, I'm still running the show, and I'll still be producing my own content, but with another editor, I can accept more material from readers and have it up in a more timely fashion.

This site is responsible for so much good in the community, both for myself and for other players.  It would be truly awful to let it sit fallow.  I promised myself when I started this site that I wouldn't let it get like the "other" blogs, which go strong for a few months than fade into obscurity, and I'm keeping that promise.  I'd like to introduce you to your new Editor, Mulldrifting's own Lauren Lee! 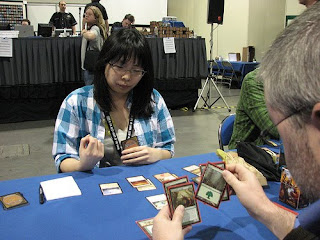 You may have noticed some articles in the past few weeks posted by someone named "Lee", and that's her.  She's been doing a fantastic job. (Photograph courtesy of Alexander Shearer.)

Lauren, 22 years old, edits Mulldrifting, is a fellow ManaNation columnist, and has been playing Magic since Morningtide.  She began competitive play during Conflux, despite having started off casually in College.   She's a full blown Spike now, putting to rest the pretty lie that all girls just want to sit around and paint their nails.  Her best finish to date was 10th place as Los Angeles Regionals, barely missing Top 8.  These days, she's playing Standard and Draft in New York City, mainly at Jim Hanley's Universe.  Welcome aboard, Lauren!