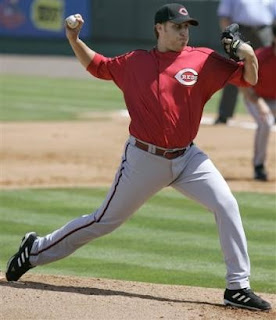 Why am I cursing out the Cincinnati Reds' ace pitcher?  Because he's Fantasy Baseball Kryptonite, and I have him on my team.  I spent $65 to enter this league, for reference.  Fantasy Baseball is a game just like Magic, with resource management, risk tolerance and evaluation, and savvy trading.  Clearly you can see why I'd be such a fan.  I'm a Roto Junkie, you see.  I live for Fantasy Baseball season.  And I really, really don't like crappy Pitchers.  Pitchers are so volatile.  That arm motion is unnatural and leads to injury.  Since they're so risk-prone by nature, drafting a pitcher with "issues" doubles up your risk.  Why the HELL did I spend $2 of my hard-earned Fantasy Baseball Bucks to put fat dumb Aaron Harang on my roster? 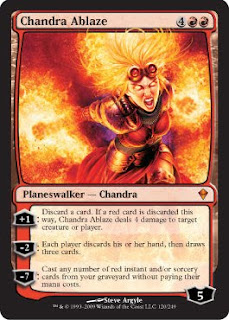 Same reason you probably paid $10 for this stupid crap in October, right when the Cincinatti Reds were, shockingly, NOT playing Baseball.  Sometimes, you just get caught up in the cachet of a name or concept.  After a certain point, the speculative hypotheses stop being true.  We "know" that Planeswalkers are expensive and usually good.  We know from experience that cards like Elspeth are insane, $40 bombs.  So we paint the Chandras Ablaze of the world with the Elspeth brush, and we hope and pray.

There is no hope or prayer in Baseball.  Nor is there in Magic, so put down the Psalms and start looking at numbers.  For the baseball-inclined, here's a link to Harang's career numbers.  If you're not baseball-savvy, his numbers are really not that that great.  If you do what the big stat-heads in baseball  do, and compare similar pitchers to get an idea of his general potential, you will see that he's really not that great.  But not long ago, he was considered a high draft pick and had great potential.  He almost went unpicked this year, until I decided that I was getting a bargain on him.  I then promptly missed my best sleeper pick of the year, Brian Matusz, who's going to be a real stud on a rebuilding Baltimore team.

Baseball yammering aside, let's compare Chandra Ablaze to the Good Planeswalkers.  The best right now are Garruk, Ajani Vengeant and Elspeth.  Jace TMS is up there too.  Note that they all cost 4 mana.  Note that they all have the ability to impact the board 100% of the time, regardless of context.  Ajani can lock down or Helix, Garruk can make a Hill Giant, Elspeth can stream dorks and Jace can Unsummon.   Chandra Ablaze costs 50% more, and her ability to impact the board is situational.   By comparing her to the elite Planeswalkers, we can easily see that she's not on the same level at all, just as I can see by looking at Aaron Harang's minor league and major league numbers that he was never meant to be an elite pitcher.  Somehow, his name became synonymous with above-average pitching, which is really just not accurate.  To call him near-elite is a joke.  His strikeout rate in his prime years was not quite there, and he's really had trouble replicating that over the last 3 seasons.  His ratios are average at best, never posting a sub-3.50 ERA over a season.  For reference, an ERA under 3.00 is considered elite.

Then why in the name of all that is White Mana did I decide I wanted him on my team?  I ignored the facts and simply got my "information" from name recognition.

Let's not fall for this again, kids.  Rise of the Eldrazi is coming out soon, and we have two new Planeswalkers to mess with.  I'm not saying that they're bad.  In fact, I think it's one of the best set of 'walkers we've seen lately.  The point is, don't be a sucker for a big name.  It seems that every time some splashy Mythic hits the spoliers, we all lose our collective minds.  MY GOD EMRAKUL IS BIG, LETS SPEND $50 ON HIM! 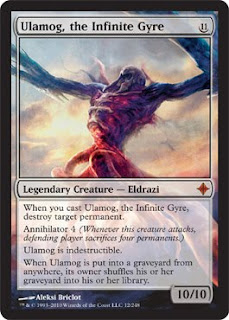 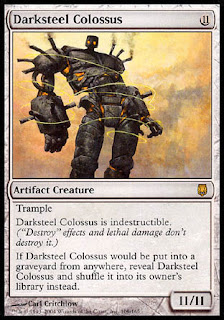 Not the way of enlightenment, young Jedi.

Let's look at precedent.  What's the best analogue we have to the Eldrazi?  Look to your left and right.  One of these cards fetches double digits on eBay.  The other hardly sells at all.  Darksteel Colossus is bigger, tramples, but doesn't start Vindicating your opponent (which doesn't matter much, since two hits from either is game over, and both are likely to connect.

Ulamog, the Infinite Gyre and Darksteel Colossus are amazingly similar cards, yet Ulamog has name recognition thanks to the fact that his little Eldrazi racket seem to be headlining this set.  Clearly, he's the least powerful of the Eldrazi, but hype alone is propping up his presale price.  With Ulamog, Emrakul and Kozilek, let's temper our expectations a little bit.  You should come to your own conclusions on the matter, but look into the history of the game.  Unless the mana acceleration is shockingly good in Rise of the Eldrazi, and I mean Grim Monoloth/Voltaic Key good, these are not going to be tournament staples.  It's possible that there are enough cards that generate horrible little mana-producing monsters while generating other value, but I would be hesitant to consider these giant haymakers as tournament cards.

If they end up being castable in Standard (since we all know about Through The Breach, Sneak Attack, and so on), it will be Emrakul who reigns supreme.  Casting him is akin to winning the game, and frankly, a big indestructible Vindicate without evasion or shroud seems like it's just asking to lose the game to a sandbagged Mind Control or Path to Exile.  If you're spending top dollar on a guy (Pitcher or Eldrazi), spend a little extra and really get the best.  Nothing sucks like overpaying for mediocrity.  Emrakul will at least give you an extra turn and some serious evasion.  Kozilek is a nice consolation prize because he at least cantrips like it's his job.

The point is, don't let name recognition or hype sway your valuations of cards.  Remember what happened with Silence?  Everyone lost their collective minds about the card, traded it at $10 all day long, and then wondered why suddenly the card was worthless.  Hype is ephemeral.  It can dissipate in a moment and if that was all that was propping up a card's price, the card will crash.  Ab
yssal Persecutor just called in and was offended that he wasn't mentioned.  Well, maybe if he were more relevant...

9 thoughts on “The Aaron Harang Dillemma”