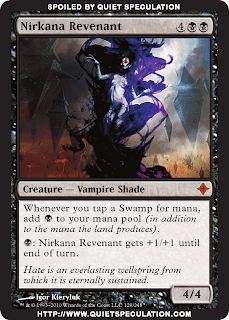 Thanks to the good folks at Wizards of the Coast, we're able to bring you yet another EXCLUSIVE preview card, this time from the upcoming Rise of the Eldrazi expansion set.  It's another exciting one, this time a Mythic Rare vampire named Nirkana Revenant.

Let's start with competitive constructed play.  It's unlikely that the new vampire will see play in the eternal formats.  6 mana is just too much for a creature that doesn't win the game outright in those formats.  Extended is much the same - this would have to be a finisher in an existing deck, and there aren't any extended decks that want a 6-drop Mana Flare.

That brings us to the only formats where the card is going to see competitive play - Standard and Block.  There is already a deck that will give it some value on being a Vampire.  It's a game-ender if you've got a Vampire Nocturnus online, and even without, it doubles your mana and hits like a truck.  The lack of evasion would be an issue if Nocturnus didn't exist, but as it stands, I'd like to test two in Standard Vampires as the big bomb it seems to be lacking.  Sorry, Nightmare.  You super-don't-count.

Block Constructed is a popular format on MTG Online, and the Vampires deck there would probably benefit from 2-3 copies as well.  Since Vampires works well against the MTGO metagame and Mythics tend to be more expensive online, this card might have a home and thus, command a higher than average price.  The loss of Nocturnus really hurts here, since he's the only real tribal synergy that the clan has, outside of Kalastria Highborne.  Nevertheless, a format in which mono-black decks are viable will give this card a home.

It should go without saying that the card is a limited bomb.  It's still scary in black-light decks, but it clearly gains a huge amount of value when you're heavier in the color.  EDH players relish flavor, tribes, raw power and Mana Flares.  This has all four.  Obviously any mono-black EDH deck auto-runs this card.  This + Whispersilk Cloak make me wish the card were a Legendary Creature.

Overall, the card has enough power and appeal to be worth more than a bulk Mythic.  It's unlikely that any deck will mark the number 4 next to this card on their registration sheet, but since it's a Mythic it will still be +EV when you open one in a pack.  It's not a card to try to acquire aggressively by any means, unless it starts out below $4 or so.  It's likely that it will see at least some competitive play, but it will be far from the marquee card of the set.  It's clear that Gideon Jura holds that crown for the moment, and he deserves it.  Card is good, people.  But you didn't need me to tell you that, did you?  We'll discuss him more shortly, but for now, the spotlight is on Nirkana Revenant and her sleek elegant Double-Shade design.  Frozen Shade, you've come a long way, baby.