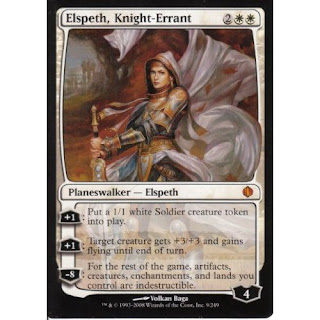 No, it's not a new deck featuring Wild Mongrel and Jace, the Mind Sculptor.  A lot of people have been talking about Mythic Rares lately, in the (world)Wake of Jace, Gideon, Elspeth and Ajani Vengeant appearing in great quantity in the same deck.  I've held off talking about this for a while now, but I think I'm ready to leave my opinion.

When I first cracked a Shards pack, I saw Sarkhan Vol staring back at me.  I didn't play a whole lot during Lorwyn, so he was my first Planeswalker.  What were the odds?  I knew Mythic Rares were scarce, so I was really, really excited.  My inner Timmy came out for the first time in ages.

As time wore on, it got old.  The appeal of busting some sick Mythic quickly faded as they became a normal part of opening packs.  Conflux and Alara Reborn didn't have the same feel.  The financial impact wasn't fully felt until Rise of the Eldrazi was released.  Think about it - some of the best cards printed lately have been Mythic Rares.  When Lorwyn was legal, the best cards were Mythics.  Do you think they would have considered printing the Commands as Mythics?  Maybe.  How about Mistbind Clique or Vendilion Clique?  Seems plausable.  So, we had the luxury of our staple rares seeing $25 price tags, not $70.

Now that RoE is out, we have a full house in Standard, and then some.  Rise adds about 150 cards to the depth chart in this season's Standard, and with it, a host of great Mythics.  That means that naturally, the best cards will gravitate towards the Mythic rarity, as demonstrated when Lewis Laskin mortgaged his house, sold his Wife's wedding ring, and traded his Bentley for a Vespa scooter to build his 5k winning deck.  It's kind of screwed up when the deck costs half of the first-place prize purse at a Star City 5k.  Nice EV.  Hope you got friends that are dealers, and don't ask me.  Mine are already betrothed elsewhere.

I like Mythics in the sense that I like the money they bring into my store.  However, my main goal is to grow the community, not make a quick buck.  I believe firmly that what is good for the community will eventually pay for itself, so if a quick buck will be to the detriment of the community, it's hardly worth it.  That's where I stand on Mythics.

I think that $30 for a single, Standard-legal card is too much.  Players are used to $20 cards.  Each set has had one for ages now.  To see Jace, the Mind Sculptor at $60-70 on major sites is awful for the game.  I know MTG Color Pie's Robby Rothe is going to put up an article on this issue later in the week, in which I believe I am quoted extensively, but for now, that's my story and I'm sticking to it.