Last week I had one of those weeks where you look back and wonder how you survived it. But they say what doesn’t kill you makes you stronger, and I find it to be true in both life and Magic. Learning to overcome obstacles in critical in your quest to be the best trader you can.

Oh yeah, I’m also offering you what could be the best six seconds of your life in this column.

Everyone has encountered setbacks, whether that’s in your schooling, dating lives or Magic careers. I’ve gone through some rough times in my playing and trading endeavors, and with hindsight, I’ve tried to learn from them.

For instance, after getting a flat tire the morning of Grand Prix Houston and playing myself out of Day 2, and subsequently trying to find a place to repair tires on Easter, I was pretty upset. It was difficult to do at the time, but looking back I can see what lessons I learned from the experience.

First, don’t leave for 8-hour trips at midnight with the idea that you’ll just sleep in the car. Secondly, I should stop myself when I see mistakes beginning to snowball. I knew I was on tilt after a particular misplay, but I berated myself in between rounds and subsequently mis-boarded a card, leading to a game loss in the last round of the day that led to my elimination from Day 2. Focusing my energy to check and shuffle my deck would have been much more productive than bashing myself.

So how can I apply these principles to my trading? The “not-going-on-tilt” lesson actually applies quite a bit to the trading game. Just a few weeks ago I made a trade where I incorrectly told a trader his card was worth much less than it actually was. While the trade turned out great for me, I felt bad because I misrepresented a card’s price, which is against my personal ethics.

I let that trade affect my next one. I preceded to trade away a number of Sunken Ruins at much lower than their actual value. I knew the card’s price, but my mind was still on the last trade.

I don’t think I’m the only one who’s had this experience. Maybe you traded away Jace, the Mind Sculptor at $25. Perhaps you bought Sarkhan Vols at $20. You thought Mind Over Matter was going to hit it big and then it flamed out. We all make mistakes. The important thing is to clear your mind before moving on to the next trade. Take a smoke break, go grab a bite to eat, play a game of EDH. It’s better to sit out a trade than go into it without having your mind right. 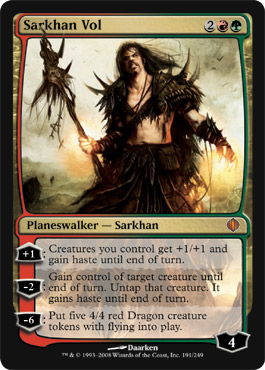 You knew better than to buy in the hype... right?

Last week I got the chance to put a number of these lessons to work, which culminated in me salvaging a weekend of trading that could have otherwise been lost. If you want to skip the (potentially) funny story you can skip down to the trades. Let’s start at the beginning.

Fast forward to last Thursday. It’s been a busy week at work, and my editor (I work at a college newspaper) challenges me to a foot race outside the building to blow off some steam. I win the first race and she (yes, she, I know agreeing to race a girl was my first error) demands a rematch and to switch “lanes” with me. I agree to her terms (my second mistake). In front of me there are a few obstacles – a tree on my left, some light poles on my right, and a grate somewhere in the middle. I line up to the right of the tree so I won’t have to duck under it. This was my third and ultimately fatal mistake, because the grass was significantly longer (and more slippery) there.

My trifecta of mistakes leads to this. I’ve been told it will be the best six seconds of your day. Viewer discretion advised.

Using the life lessons I’ve learned from Magic (never let your girlfriend tell you the game is a waste of time), I’ve decided to turn this experience into a positive. Sure, I ended up with a dozen stitches, a puncture down to the bone, a weekend on crutches, and a potentially scary emergency room bill, but I’m angling for a Tosh.0 Web Redemption! Seriously, show the video to your friends, I’m going viral.

Friday, the day before I’m scheduled to attend the Scars of Mirrodin prerelease, the mechanic calls me and tells me they can’t find anything wrong with my car. So after driving an hour to pick it up on a Friday afternoon and then attempting to drive my car with my busted-up right leg, it only makes sense it would break down again five miles down the road. To make matters worse, I had to have my mother (thank God for parents who are willing to help out their twenty-something children) drive me to a local football game that I’m covering as part of a freelance gig for another newspaper. Going up and down bleachers is not fun with a wounded knee, a laptop bag and crutches made for someone five inches shorter than you.

If you’ve stuck with me up until this point, I hope it’s been an entertaining read. We’re now venturing back into the realm of Magic.

The worse part of the entire debacle is that my trade binder has been left in my broken-down car in the confusion. This means when I finally make it to the prerelease on Saturday I’m without a single card to trade. Quite the conundrum for someone who trades more often than Craig Wescoe performs #Wescoechecks.

At this point, I had to laugh at my own luck. Sitting there Saturday morning, barely able to get out of bed, my inner optimism (or maybe the painkillers) led me to make a resolution – I was going to make something positive out of the weekend.

Putting the plan into motion

I write all the time about trading up, so now was my chance to prove myself. I pulled some decent rares on Saturday, but I knew beforehand I was going to have to leave the tournament early due to a prior obligation, so I was really just increasing my stock for the Sunday prerelease I planned on attending. So I opened my packs, built my deck, scrubbed out of the tournament at 3-0, and got ready for Sunday.

I had another decent pull on Sunday, finished the tournament 4-1, good enough for second place and $32 store credit (net $7 after the entry fee), then I went to work on some trades based on what I had.

Obviously nothing huge here, but the Journal worked well for a deck of his, and I convinced him it was a Myr Reservoir (see what I did there? Okay, no more puns).

I tried to capitalize on some of the newness of the cards here. I didn’t trade away anything here I’ll have a hard time picking up again if I need it, but picking up the Sun Titan is something I’m comfortable with since it’s a heavy player in U/W control, which I still think is going to be the premiere deck heading into next season.

I’m trading one EDH-type card for another here, but the Armor is a bit more flashy. I might bank this one for my personal decks if I get around to building the Kor casual deck. Alternatively, I’m sure I can trade this thing off rather easily. 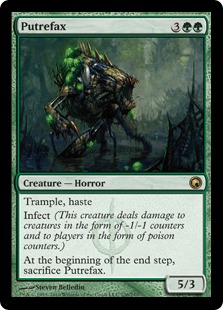 What makes for good trade fodder? The word "infect"

Typical EDH player here, looking for cards to round out decks and happy to trade away stuff not slotting into his deck. I think the Mass is a great card that will find its way into a few decks, especially once more of the block is released. It fills any spot on your curve, and plays nicely with most of the set’s mechanics. Putrefax says “infect” on it, so it will move quickly.

The store closed before I could really accomplish much more, but I was still reasonably happy with the fact that I was able to even accomplish what I did. I missed out on a ton of potential trades by not having my collection with me, but after the preceding week, it was an accomplishment to just be on the floor trading rather than laying in bed watching reruns of Jersey Shore.

I know this week was more story than it was trade analysis, but I thought it was entertaining enough to relay. I’ll be back next week with more trades and another Reader Trade of the Week! I’m really enjoying the discussion the last one prompted in the comments, and I appreciate everyone’s views on the matter.