Magic Online promos. Do you love them or hate them? I must confess. Personally I get obsessed over them sometimes. Should I? Probably not. But there’s just something about their shiny, MTGO symbol underlay-ed, alternate art awesomeness that draws me in. It doesn’t help that it’s normally the first thing you see in your trade partner’s digital binder. You know what? Let’s go ahead and look at a couple right now just to prime this article up righ 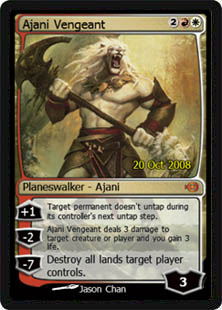 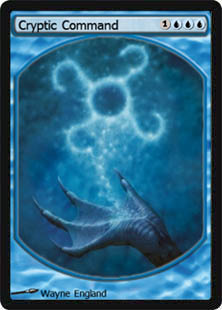 What I want to do this week is delve into how promos fair financially on Magic Online. That is, should you be trading for them? How high should you value them? Are they going to maintain value? I hope to answer all of these questions and more. Welcome to this week’s edition of E-valuations.

By now you all know I love sharing information, especially when I can insert a link. Well, here’s my link for you to check out this week. It will lead you to a Wizard’s of the Coast wiki page dedicated to listing all promos that were given out on MTGO and for which event they were distributed. There’s a ton of information there, and when I first stumbled upon this page I probably spent the better part of an hour looking over it. So if you ever wondered where that sweet Hazezon Tamar promo came from that is staring back at you during a trade, now you’ll know.  Note: A quick tip to search the page for a certain card is to hit Ctrl > F and submit your query.

Now, let’s get into some raw data after you have looked over the page and said to yourself,

“Wow, I didn’t know there were that many promo cards online!”

The following is a spreadsheet I whipped up that lists the promos we will be looking at today. Note that I included only Mythic Rares and Rares for space reasons. This should still give us a good idea of what to look out for, and if we should really put significant value and effort into these things. I’m also using MTGO Traders pricing for all cards, and narrowing down our data to which promos are actually in stock. The reason I’ve done this is because the price listed for something that isn’t in stock normally isn’t as accurate as if it were. MTGO Traders is on the top of a long list of MTGO retailers, and I often use their prices when considering trades and purchases. All prices are as current as the time of writing. You’ll note that I’ve separated the spreadsheet into three categories: those for Standard, Extended, and Legacy types.  Some cards are only available in promo  type online, so they were not included. Regarding reprints, I’ve used the pricing for “regular“ as either the newest printing, or the printing that has the same art as the promo itself.  Onward! 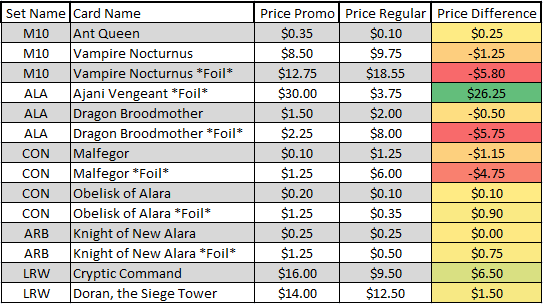 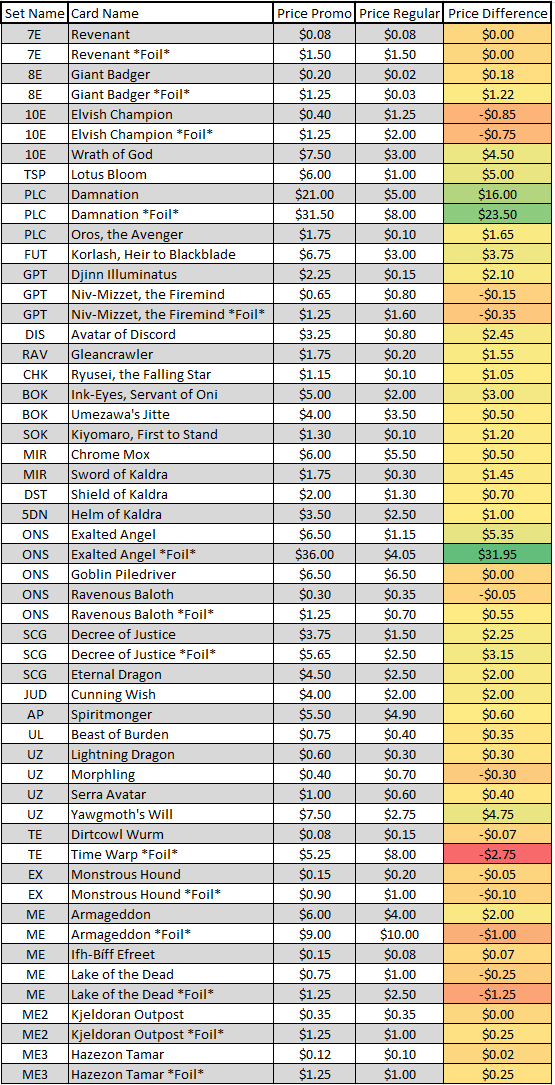 You might be surprised when looking at promo prices versus regular prices. One would expect all promos to be quite a bit pricier than the regulars; for the most part this is not the case. Although they are generally a bit more expensive most of them are within a couple dollars. Some are priced even less.  Cards regarded as “crap rares” will likely not yield higher differences in price either.  However, cards that are novelties or ones that see significant play in tournament level decks seem to have a higher price variation.

The most important thing to remember here is that you’ll need to take into consideration the availability of not only the promo itself, but the set it was originally printed in as well.  If a card had a limited online “print run” in the first place, there’s a good chance that both the regular and promo version will hover around the same price. We can see that promos from Urza’s Saga and Urza’s Legacy, the last two vintage sets released online, are nearly all within .50 from the regular versions.

Promos themselves originate from different venues, as you saw from the link above. The number of promos that are available will depend on which event Wizards gave it away for.  Basic land promos, for instance, may be some of the easiest to pick up considering the nature in which they are distributed.  The Magic Online Player Rewards program is a little shout out to everyone that plays online. As such it’s not hard to be eligible for tier one giveaways, which are normally alternate art lands. On the other hand if you were trying to track down a foil Exalted Angel promo you’d need to realize that it was only given away to the top 32 finishers of the Magic Online Championship Series Season 4. We can deduce from this information that its supply is extremely low, hence the $30 difference in promo to regular.

What I’d like to touch on here is how players value their cards personally, rather than cut and dry price-wise. When you play in a tournament online and even more so when you do well, you’ll probably have fond memories of it. As such players may have their promos available for trade but value them a bit differently considering they have some sentimental attachment. Alternately, some players may feel little to no attachment to promos that they were given for free. I’ve been in numerous trades where I’ve asked my trade partner if they wanted to get rid of their promos and they’ve pretty much told me “Sure, I don’t care. I didn’t buy them or trade for them in the first place.” Such is the way some of the MOPR cards I mentioned above are treated.

I’m in no way telling you to troll people’s binders for cards they don’t want and try to get value out of them. But not all MTGO users have a special place in their heart for promos.  However there are players out there that will search high and low to obtain a playset of each. What I’m getting at here is that when trading, especially if you do a fair amount of it, keep in mind that partner you traded with last week who wanted every promo card you had. You want to be the guy online that has a little something that everyone needs. This way your trading will continue to be fruitful.

So, should you be trading for promo cards? If you can pick a playset of promos up in a short amount of time then go for it. I think you’ll have far more luck in trading away cards in this manner. Most users that are trying to pick up cards for their constructed deck enjoy having all 4 cards of the same type. It’s a possibility that they think it’s unprofessional to have some promo and the rest regular. As I said earlier, if you’ve been trading on client for some time chances are you have an acquaintance that seeks out promos on a regular basis. Don’t be afraid to pick up cards you know they’ll be interested in. Use a reputable retailer’s price list in conjunction with the link I’ve given above to determine what you should value a promo’s worth in trade value. Be on the lookout for good deals on promos and if it’s a possibility, take advantage of them. In my experience it is a little harder to trade away these shiny cards in everyday situations, but when you can strike a good deal you can enjoy a healthy profit.

I'm going to share with you an outstanding example that I recently came upon. I must confess though, I was AFK for the day when I received a comment about how low Wurmcoil Engine promos were going for. The tip came from one of my Twitter followers @Carmenbarrasso.  Two articles ago I explained how to take advantage of Prerelease and Release events. It just so happened that when Scars of Mirrodin Pereleases were drawing down, players were trying to dump off the promos they received in order to scrape up some tickets to enter another event. Once I logged on and saw what was going on, the promos could be bought for anywhere around 1 to 1.5 tickets – foils around 2 tickets. Now, at the time of writing, these very promos are going for 2.5 and 3.75 tickets respectively. If you were able to get in on this and can now turn your purchases over you’re looking at a nice profit. These are the kind of things we live for here a  Quiet Speculation, and considering it was a promo I felt it was a great addition to this article. Thanks Carmen!