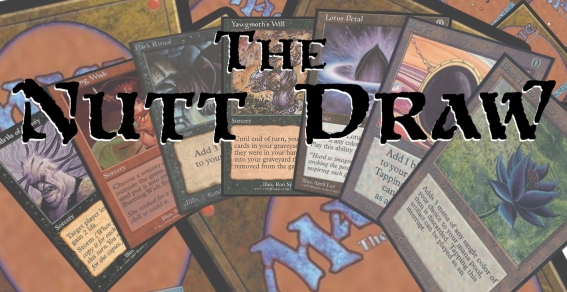 Welcome to another action packed edition of The Nutt Draw!* This week we will be checking in with the relative booster pack values and taking a look at the amount of expected cash we can hope to pull out of those packs.

If something you read here looks confusing you may wish to check out some of my processes and explanations here. The Nutt Draw: Primers and Glossary

The last time we looked at these values I had explained that I had put together all new calculations which were a lot more in depth then they had been before. For this article I have recreated the spreadsheets I use for the calculations and completely revamped the way it’s being presented. That last article was essentially just throwing a ton of data at you. I tried to pretty it up, but ultimately I think that most readers would have to really study the numbers to understand what the messages and core information was. This time around it’s all still there but I’ve broken it all apart into different groups of relevant data.

The first data grouping looks at the values of each edition and how it related to cracking packs.

As you can see Scars of Mirrodin has the largest total set price for all the sets back to Shards of Alara. It’s a large set so at full retail it would statistically cost $477.95 to make one complete set of cards. Purchasing a set that way would leave a lot of extra card since the Mythics show up so infrequently in the packs. If you were to crack 121 packs to chase down one set of Scars the approximate total value (by eBay card value standards) would be $394.98. This gives us a likely per booster value of $3.26. When comparing that value to the other sets on this list we can see that the best overall value per pack is actually Worldwake. However, I would argue that since Jace, the Mind Sculptor makes up such a large amount of the value of Worldwake the best bang for the buck is actually Zendikar. The reason why is in the next section.

The above numbers compare what happens to our chances of opening gold when we take out the highest priced card in each set. Some sets like Worldwake plummet in value when their number one cards are removed. Scars of Mirrodin stays deceptively high. The value you see there has to be mitigated by the fact that there are four cards that right now hover around $40 each. Looking at this list we would still probably pick Scars to crack for money cards, but I’d like to draw your attention to the figure in the middle of the chart labeled “Set EV w/o Mythics w/o Commons.” When you pull Mythics out of the equation the best valued packs are clearly Zendikar, with Scars coming in dead last for sets legal in Standard. This is mostly because most of the cards of value in ZEN are rare not Mythic. I think this is a valid measurement since the chase Mythics being generally so illusory.

The above chart is a look at some of the notable singles each set has to offer, and is pretty self-explanatory.

The following chart is a look at EV results which vary depending on what is being calculated. For example, some people don’t like to calculate the Uncommons and Commons when looking at the value to expect from a pack.

Percentages are something that resonate very well with me. Whether it’s what an additional land can do for the average number in an opening hand or how to balance three of vs. four of in a deck depending on when you want to draw it during a game. This next chart will tell you what the chances are of pulling nearly any range of value of singles from the packs you’re opening.

For all you dreamers out there who grab that one pack of Worldwake “just in case” you might get a Jace, the Mind Sculptor you now know that you have a 1.25% chance of it being in a random pack. This chance however can change a great deal depending on what has been opened in that same box or the same case. I would have to say that if you’re chasing planeswalkers and one has already been opened in the box you’re buying from there is a vanishingly small chance that there will be another. It happens of course and it’s different for every set due to the collation order but that Primeval Titan or Gideon Jura might be a little further out of reach then it feels.

This final grouping of information is meant to suggest what the best random pack to buy is based on a ranked set of criteria. Some of the ranking is based on my own notions of what is most important, but if this list doesn’t suit you I’m certain there is a lot of information above that can help you decide the best booster pack based on what’s important to you.

*Not guaranteed to be action packed

Born in Seattle, Washington, Chris McNutt has been playing and collecting Magic: The Gathering since Unlimited Edition. As an active player, tournament organizer and judge he regularly scrubs out of Pro Tour Qualifiers but inexplicably cleans up at the local draft tables. When not net decking Chris is either busy working as an Information Technology Sales Rep or spending time with his family. Other non-magical pastimes include playing guitar and an unhealthy number of video games. Cursed with an undying love of generating spreadsheets purely for â€œfunâ€, heâ€™ll be crunching the numbers each week in order to serve up delicious data burritos to the salivating, hungry readers of Quiet Speculation.