Although players prefer to ignore the inevitability, I will make the bold statement here: one day, new Magic: the Gathering cards will no longer be printed. 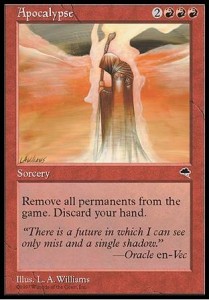 It pains me to say it, but it is an ultimate truth we must come to terms with. The cliché “all good things must come to an end” applies to many facets of life, including life itself. Magic: the Gathering is not immune to this truism.

This indisputable fact is the basis for my occasional sealed product purchase. I never want to imagine a day where I can’t open a fresh pack of cards. And I can ensure that day never comes regardless of what Hasbro’s profitability is from this game.

Why I Buy Booster Boxes

This Magic Apocalypse is hopefully many years away. The game is selling more now than ever before, and with a recent increase in Grand Prix Wizards has shown no indication of a slowdown any time soon.

But I would argue there are still other valuable reasons why one should consider acquiring a couple of Booster Boxes – even beyond the concept of owning one of the last few sealed Magic products available.

This is a financial column, so of course my number one purpose for discussing sealed product is the potential for profit. Often overlooked, sealed booster boxes are rife with investment opportunity. You just need to know where to look.

The strongest supporting argument I can provide for this theory lies in current prices for out-of-print boxes. While the price per box varies widely, even to orders of magnitude when Legends and Arabian Nights are included, there is one general trend that holds true for most sealed boxes. They go up in price.

A cursory breakdown of sealed booster box prices of out-of-print product from Star City Games shows that the average price on their site (excluding boxes above $1000) is just about $200. Since booster boxes typically pre-sell for around $100 shipped this indicates that if you buy a box of every new set, then on average you will double your money if you wait long enough. 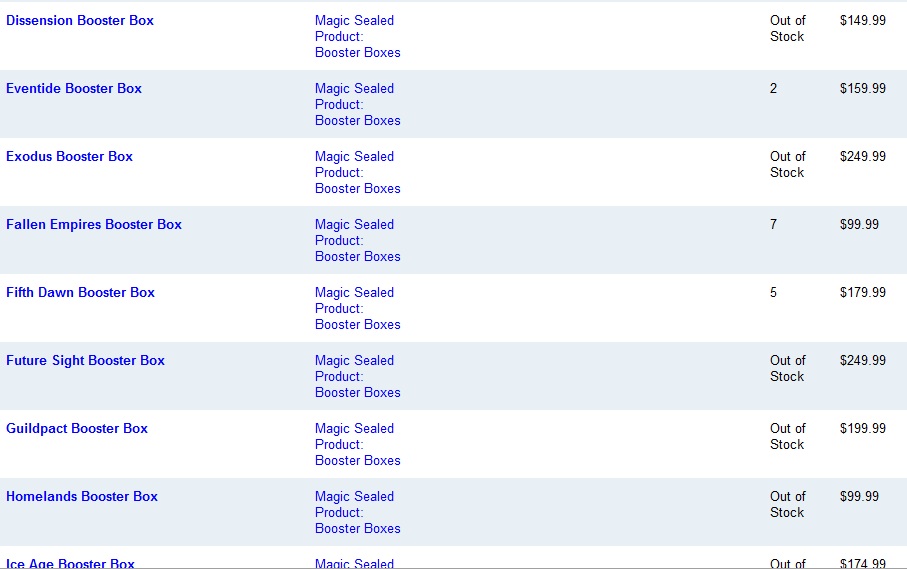 But these numbers are even better once you factor in some common sense. Everyone knew that Fallen Empires, Homelands and Nemesis were below-average sets. Meanwhile, thanks to Tarmogoyf, a set like Future Sight is far above-average. If we had made the [arguably logical] decision to purchase zero boxes of the poor sets and multiple boxes of the stronger sets, profits could have increased even further.

I have two personal experiences with buying boxes for profit thus far. A few months ago I purchased a box of Unhinged for $144 shipped. The Unhinged lands were slowly creeping up in price and I figured with boxes of the original joke set Unglued selling in the mid $300’s, there was plenty of upside. Sure enough, booster boxes of Unhinged reliably sell for $200 on eBay as we speak and prices aren’t slowing down.

On the other hand, I also purchased a box of Coldsnap a few months ago. My rationale was that there would be at least a handful of breakout cards for Modern hailing from the Coldsnap expansion. Since the set was unpopular and didn’t sell well, I figured quantities would be lower, driving prices up. Turns out there really isn’t much in Coldsnap worth owning these days and my investment is still basically flat. Impatience has driven me to sell the box for a marginal loss.

No, I’m not implying sealed booster boxes can help save your life or fight criminals. I am referring to the best characteristic of booster box investments – they virtually never drop in price in the long term

Sticking with the original assumption that a booster box of a new set sells for $100, I’m hard-pressed to find many sealed, English booster boxes under this price. A quick search of Buy-It-Now auctions on eBay yielded very little. There were plenty of Standard Booster Boxes in the mid $90’s, and there were even a few Italian, Chinese, and French boxes even cheaper. But the cheapest English booster box of a set not legal in Standard was M11, priced at $97.99.

Of course you could argue that sitting on the sidelines watching auctions will yield you better prices. But my point still remains strong: given enough time, there are very few boxes you could buy upon release that won’t pay off in the long run. If you buy booster boxes of a disliked, underpowered set, you will still nearly break even. And again, applying some common sense will ensure your investments are even safer.

I love playing in FNM drafts. The format has been a Magic staple for many years, and the appeal is even stronger now that Wizards pays closer attention to ensuring the format is fun and balanced.

On a given Friday evening, as soon as the tournament organizer says “go”, we rip open pack after pack seeking to make the most unbeatable deck. Do you ever stop and think about what would happen if the accessibility of these packs diminished?

I began drafting during Time Spiral block (I was very late to the party). To this day, triple Time Spiral is still my favorite drafting format. Even Time Spiral, Planar Chaos, Future Sight looks like a ton of fun because there is such a wide breadth of playable card types. 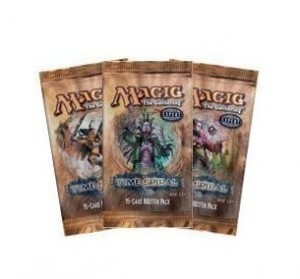 But here we are a few years and I can no longer head over to my LGS and draft these sets. They are simply too expensive or in most cases, not even in stock.

Oh, what would I give to be able to draft these sets again? Well, some patient bidding on eBay has gotten me even closer to this dream. For $160 I managed to pick up a sealed, English box of Time Spiral booster packs. The price isn’t cheap, but that should be no surprise. The set has a few strong Legacy/Modern/EDH playables and I have a feeling the supply of sealed boxes is diminishing thanks to the casual appeal of drafting this set.

With this booster box in hand, I have a win-win decision in front of me: I can sit on the sealed box and attempt to sell/trade it for profit in the future. After all, supply of this product will never go up again. Alternatively, I can find a few MTG friends and re-live Time Spiral drafting days! Either way, the investment in this box will be well worth it.

Some readers may be flustered with this article’s position: I present an opinion and decline to provide alternate viewpoints on this topic. Fear not, emphatic readers, for I will at least mention a few downsides and alternatives to owning booster boxes.

First, sealed booster boxes take up a decent amount of space, especially in numbers. If storage is a limiting factor for you, perhaps only a dabble in this area of MTG investing is the right amount for you. Closet space tends to be a precious commodity.

Second, there’s the factor of opportunity cost. Each box typically costs $100-$200, and this is a significant amount of cash to have tied up for months to years. Certainly, buying seasonal staples and Standard break-out cards can net you larger profit in the short term. But having already written articles about those strategies, I wanted to provide an alternative for people with a long-term view.

Finally, one could argue that purchasing dual lands and Power would be a comparably safe investment. I won’t disagree with this argument. I will merely state that booster boxes is a fun alternative to consider. After all, it’s much more likely you’ll find a few friends who will want to draft an older set rather than a few friends who want to play sanctioned vintages tournaments with Power.

Overall, I think an investment in one or two sealed English booster boxes is worth a shot. Recently I have picked up a box of New Phyrexia. Prices are already a little higher now than they were upon the set’s release. Even though the set will soon rotate from Standard, there are a good number of playable cards across multiple formats. The set also has some sweet flavor that may be fun for casual drafters.

Finally, being the final set of its respective block, the amount of product opened is relatively lower than its block counterparts.

I encourage you to research sealed box prices a little further, to see if you come to the same conclusion as I have. That is, sealed booster boxes rarely drop in price, but on average they increase in price significantly over a few years.

The time frame may be much longer, but the risk/reward ratio is nearly unbeatable!

9 thoughts on “Insider: An Alternate Investment in Booster Boxes”