For the past two weeks I’ve been in Rome, experiencing the city and all its wonders through a roughly six-week study abroad program for architecture. Among many things, my studies have dealt significantly in history, be it the bloody history of Rome’s oft-changing seat of Caesar or the general majestic forces at work in Rome’s grand churches. This interest, as my personal interests often do, has had an effect on my interests in Magic. Which is my way of saying buckle up, because we’re going to be talking history. 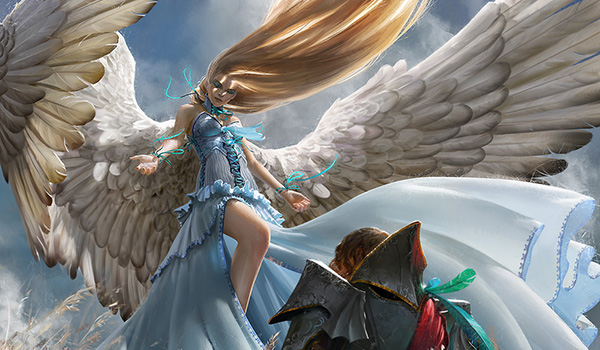 Concerning real-world historical analysis, it’s often been said that history is "written by the victor." Had the Mongols burned Rome to the ground, angsty 21st century college students would be ignoring an entirely different set of architectural wonders, and tourist mothers would be shielding their tourist children's eyes from statues of beheadings rather than male genitalia. In Magic, this concept carries over as well. Pro Tour Return to Ravnica was won by Eggs. Can you name another storyline from that event? You get my point. So, instead of discussing the history of Modern the “normal” way, by framing the discussion around top decks and influential bannings, instead I would like to take a different approach, by looking at the impact each of Magic’s five colors have had upon the game.

This approach carries with it a few benefits. Analyzing a color’s various identities and influences in the format will come in the form of lists, which will serve as a useful reference for deckbuilding. In a format defined as much by mana constraints as it is by safety valves, determining the strengths and weaknesses of a specific color can be quite influential in archetypal decisions. Also, while the vast card pool available will undoubtedly result in “bleeding” of what a color is capable of, this analysis will show what each color does well, and more importantly, poorly. Just because white has Path to Exile doesn’t necessarily make it the king of removal. And with that, we begin.

White’s color identity in Modern is so intriguing because its power is amazingly disproportionate related to its scope. By that, I mean the amount of influence white has in the format should translate to a breadth of powerful spells, but it doesn’t. 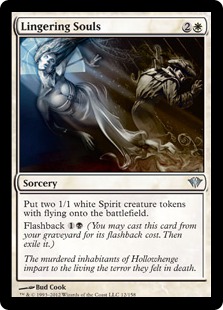 Take a look at the format staples. Path to Exile is undoubtedly the gold standard when it comes to removal, but beyond that, that’s it. Lingering Souls is an excellent spell, and the best possible rate, but requires black to be fully effective, so it’s unfair to call it a “white card” completely.

As anyone familiar with Modern knows, the strength of white in the format comes from its sideboard. Stony Silence is the single best answer to one of the best archetypes in the format (Affinity) and Leyline of Sanctity and Rest in Peace are both the strongest options for fighting Burn/Discard and graveyard strategies respectively. All of this should be well-covered territory by now, but these characteristics exhibit an interesting underlying trait: white is powerful, but mainly in a supporting role.

White contains few truly powerful threats. At the top of the curve you have things like Gideon Jura, Elspeth, Knight-Errant, or Elspeth, Sun's Champion. But those see little play, lacking the raw efficiency of staples like Tarmogoyf or Liliana of the Veil. White also contains no powerful card advantage-generating effects outside of multi-color options like Sphinx's Revelation or Lingering Souls. No Dark Confidant or Snapcaster Mage.

Instead, what white offers is excellent disruptive elements: the best, most high-impact sideboard spells for fighting specific matchups, and Path to Exile. In a support role, white’s lack of strong staple creatures or card advantage spells no longer becomes a weakness, as it can fulfill its role by playing to its strengths while pairing with other colors to overcome its weaknesses.

Let’s take a quick look at some lists that incorporate white as a support color in this way.

Here, we see a base black-green archetype that provides power through the strong, individually high-impact spells like Tarmogoyf, Dark Confidant, and Liliana of the Veil. White plays a support role, offering Path to Exile (and Lingering Souls/Siege Rhino) in the maindeck, and powerful silver bullets out of the sideboard. If we’re evaluating colors on share of the workload, white clearly underperforms, contributing around eight spells to black’s 14+ and green’s 10+ (and we could easily count Noble Hierarch and Tarmogoyf as 1.5 if we wanted to, as they truly are “that good”). 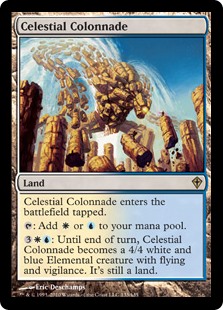 Here again white plays a support role, contributing Path to Exile and sideboard spells primarily, but also helping to cast Nahiri, the Harbinger and activate Celestial Colonnade. It is easy to see white play a support role to blue, with format powerhouses like Snapcaster Mage, Ancestral Vision, and counterspells doing much of the work. In this archetype, red might be pulling the least weight, as it really only offers Lightning Bolt (as a less universal Path to Exile) and again access to Nahiri, the Harbinger. Red’s sideboard options are also strong (Blood Moon should we build for it, Vandalblast, and Anger of the Gods) but are overshadowed by white’s and can often be replaced.

The Case of Death and Taxes

If the most prominent and successful white strategies use the color in this support role, that doesn't necessarily mean white can't form the core of an archetype. If our hypothesis is that white is poor in this latter role, we need to examine some white-based archetypes to compare their performance to that of the ones above.

Death and Taxes includes the ever-present mainstays of Path to Exile and Stony Silence, but also incorporates less prevalent white options not seen in other archetypes. Of these, Leonin Arbiter and Restoration Angel lead the pack as the “best of the rest,” but much of their power comes from synergy rather than individual strength. 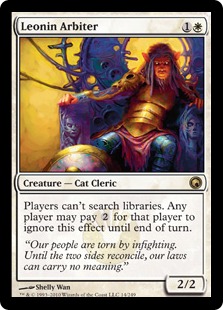 When comparing heads up, Leonin Arbiter doesn’t hold a candle to Dark Confidant or Tarmogoyf, yet when supported by Ghost Quarter and Aether Vial to power out other threats, Leonin Arbiter’s strength grows considerably. Restoration Angel is clunky as a 3/4 flier for 4 but excels when doubling up on enters-the-battlefield effects or saving one of your lock pieces from death.

Death and Taxes has been a mainstay in Modern for some time now, and some conclusions about it can safely be drawn. While the archetype is enjoying Tier 2 popularity at the moment, this is a relatively recent development. Traditionally it has waxed and waned continuously in Modern without ever really being considered a serious contender.

In my personal experience, Death and Taxes exhibits some inherent weaknesses that are hard to overcome. It is soft to hand disruption and struggles to recover from resource deficits or unexpected angles of attack. A simple Liliana of the Veil can send them reeling. Tarmogoyf outclasses all of white's creatures by itself, requiring a timely Path to Exile for them to break through. A few removal spells on key creatures can leave it topdecking extra lands and useless Aether Vials with no way to recover lost card advantage. Control strategies in particular can be extremely hard to combat.

Their plentiful removal and card advantage, along with a naturally higher land count, fights Death and Taxes' disruptive elements on all fronts.

The newfound success of Death and Taxes is likely a function of the introduction of the Eldrazi to the format, which have shown their ability to define and revitalize archetypes from Standard to Legacy. In many ways the iconic colorless tribe acts as a kind of sixth color, and we can see how it augments white's core disruption package. In Thought-Knot Seer and Reality Smasher, D&T finally gets access to some significant bodies. These allow it to address the Goyf-as-Moat problem and capitalize on its disruptive elements by closing games quickly before opponents topdeck out of the bind. It also acquires a powerful interactive element in Eldrazi Displacer, which contributes to the disruption plan while boasting flexibility the other "hate bears" can't.

More than anything else, the takeaway for me regarding Death and Taxes is that it clearly demonstrates white's ability to function as a disruptive element, but suffers from an overall lower power level compared to other established archetypes. This may be changing now that it has elected to "splash" colorless mana.

1 Return to the Ranks
4 Spectral Procession

Without question, white excels in the area of lifegain, enough to support a whole archetype dedicated to the strategy. Besides disruption, this is white's one great skill---the unfortunate fact being that lifegain just isn’t a good strategy. Ad Nauseam doesn’t care. 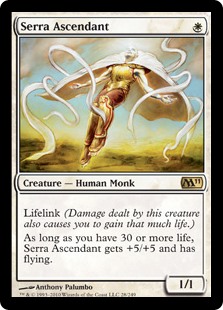 Infect doesn’t care. Jund destroys the deck. Affinity is too fast if they don’t have Stony Silence.

The very fact that the white-based decks resort to lifegain or "tricky" effects in Death and Taxes shows the color's weaknesses. Its main strengths are its disruptive elements, which take many forms: answers to aggro and creature-combo in Path to Exile, knock-out bullets out of the sideboard like Leyline and Rest in Peace, hate bears that stymie mana development like Arbiter and Thalia. What all these cards share in common is their ability to put an opponent off balance---but they lack the raw power and game-winning potential of the Goyf's, Snapcasters, Bobs, and Goblin Guides of the multiverse.

Thus white typically takes on the support role, providing backup and disruption to the other colors while they execute their core strategies. In Death and Taxes, white has endeavored to form a "mono-disruption" archetype on the model of old-school prison decks, but it seems to have struggled until the arrival of the colorless-matters Eldrazi gave it additional tools.

So, to recap, bullet point style.

Multicolor spells that include white are plentiful in Modern, and offer various effects for a solid rate. The best of these include:

Pairing white with every other color gives access to multiple stronger options, with the red-white pairing being the weakest. While outside the scope of this article, this hints at one of the reasons why Mardu has traditionally underperformed in Modern while Abzan has fared much better. This could, however, be more accurately attributed to the favorable heads-up fight between Tarmogoyf and Lightning Bolt.

White-green offers some of the strongest incentives, with Voice of Resurgence and Qasali Pridemage seeing abundant play in Company lists of both Naya and Abzan varieties.

For white to truly become a strong contender for stand-alone power in Modern, it requires either a build-around-me card like Balance, or a pushed format staple like Stoneforge Mystic. As long as it lacks a strong creature, white will always be relegated to a support role and paired with other archetypes that can provide such spells to overcome its inherent weaknesses.

Pairing white with blue naturally overcomes its difficulties associated with card advantage, while pairing white with green or "colorless" gives it much-needed big creatures and aggressive elements. Until then, may white players continue to Path creatures to their hearts' content, and may Affinity always cower in fear.

Thanks for reading, and I'll see you next week when we cover blue!

7 thoughts on “The Colors of Modern – Part One: White”