Hey guys! You might have noticed that I’m new here. As outlined here, I've been brought onto Modern Nexus to write a weekly column, and I want to take a little of your time to introduce myself. My name is Jim and although I’m originally from New York City, I live in Orlando, Florida. I play a lot of Magic but when I’m not slinging spells I'm working as a software developer. If you’d like to chat more the best way to contact me is @Phrost_ on Twitter! While most people on this site write about Modern strategy, my focus is going to be on the financial side from the player’s point of view. My aim is to provide Modern enthusiasts and players the information they need to know to play their favorite format at the cheapest cost possible. 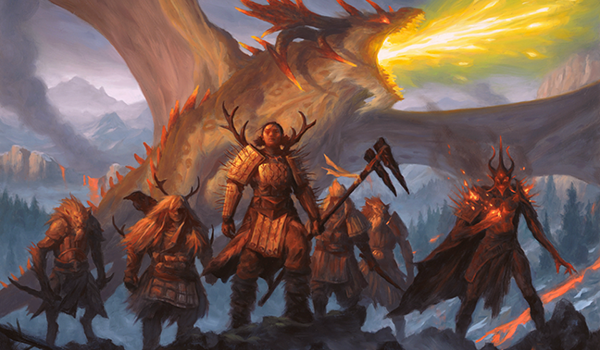 So yeah there was just a Pro Tour. I’m sure all of the Modern players are excited, right? Eh, maybe not. But let’s be clear here. Standard is a huge reason that cards are worth money (or not) so it is important to look at Standard trends to see how they affect your Modern prices.

Like we’ve seen before (with Nahiri, the Harbinger for instance), Modern can also have a pretty big impact on the price of Standard-legal cards. Let’s break down what happened at the Pro Tour.

There were theoretically five different deck types that made the Top 8 of Pro Tour Eldritch Moon but I really count four of them as “Emrakul” decks. Temur Emerge and R/G Ramp are basically trying to do the same thing, which is play big things capped off by Emrakul, the Promised End herself. As you might have expected, Emrakul has seen big gains this past weekend. Most of Emrakul’s in-game value comes from her cast trigger which is great if you’re not sneaking it into play.

In Modern, it’s likely to become adopted by R/G Tron lists as a way to beat combo decks (like Ad Nauseum) that aren’t that negatively affected by the Ulamog, the Ceaseless Hunger cast trigger. If you don’t play Tron, however, I think this is a great time to get out of any copies of Emrakul you may have. Her price will flatten out in the coming months as the hype train comes to a close.

Bant Company came in second in the Top 8 with a pair of copies, neither making the finals. That’s a sharp decrease in dominance from the previous week’s SCG Open in Baltimore where 17 of the Top 32 finishers were playing Bant Company.

Now that the sky is no longer falling I feel like we will finally see the price on Collected Company start to dip. If you’re interested in getting them for Modern, I think the best time will be the week of Kaladesh spoilers but you may also be able to find Standard players looking to move out now at a good rate for you.

On the other hand, if you already own Collected Company I think we’re just past the point where it’s not worth selling them to rebuy them later. The best buylist prices have slipped to just 66% of the best sell prices. At this point Collected Company would have to go under $9 for you to break even. That’s fairly unlikely at this point.

The last two decks in the Top 8 are functionally very different but share the same high-priced planeswalker, Liliana, the Last Hope. She is definitely no Liliana of the Veil and my expectations for her in Modern are slim to none. If you don’t play Standard, now will probably be the best time you can cash out your Lilianas. Buylists across the board are pretty high so you can easily turn your Lilianas into some great cash or store credit---but the real pro play is to trade them into Modern staples.

While Liliana might be “worth” $40 right now you’ll probably be hard-pressed to find someone with a Tarmogoyf that wants to trade it for three Lilianas. What you won’t have trouble finding is someone looking to trade their soon-rotating staples. Try to trade your Lilianas for Kolaghan's Command, Collected Company, Atarka's Command, or Anafenza, Kin-Tree Spirit.

You might be lucky and find an overjoyed Standard player happily unloading their old cards for new ones. It's likely cards on both sides of that trade will fall in the coming weeks but you will end up with the cards that are proven players in Modern and will likely retain more of their current value.

I always encourage comments in the section below or on Twitter. I’m new here and I want to know what you like to read!