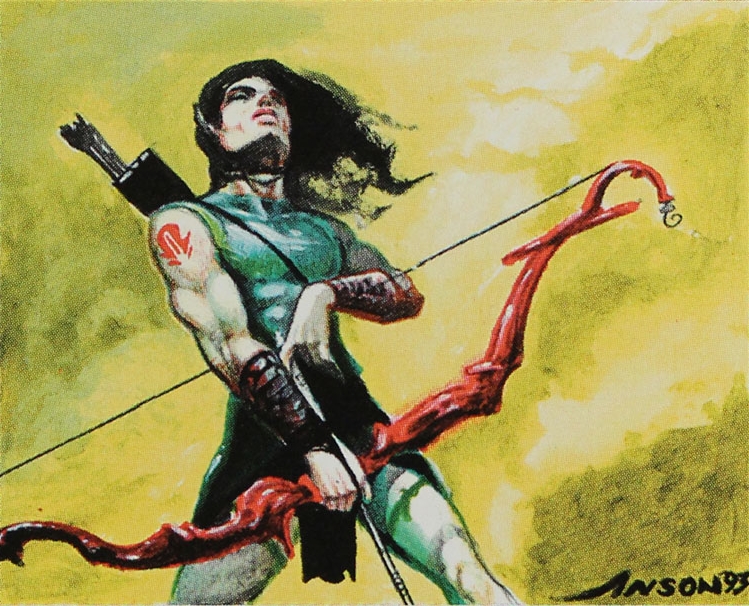 Usually my three "personalities" are in sync and work together to improve my collection. The trader supplies the cards and makes sure we get a deal. The player ensures we can have fun with the game and identifies cards to pick up for play purposes, giving the trader input on what is good to play. Meanwhile, the collector ensures we also pick up other cards, so that the player has them available for future deck building, and the trader has long-term investments that grow steadily.

I wouldn't call this perfect synergy—the collector and player at times want to hold cards that the trader would prefer to move—but it works for me. Today I am going to try to give you some insight into the collector's mindset so that you have some idea of what to expect when you come across one of them.

There are basically two things I collect in Magic:

As the former is much easier to show off than the latter, I will focus on that. I have taken a picture of every tournament-legal English Elvish Archers with the right art to give a bit of an idea of what such a collection would entail.

Would you have guessed that there are eleven different versions of Elvish Archers that meet my criteria for collecting? I forgot the Rivals one myself!

I also own Collectors Edition, International Collectors Edition, World Championship Deck and Beta/Collectors Edition artist proof Elvish Archers, which are not tournament-legal but might be considered part of the English set (I'm missing other artist proofs though). I own many duplicates, a bunch of foreign ones, and even a Reaper Miniature (sealed in box). I would guess I own roughly 200 in total and I am always looking to pick up more of them (if the price is right).

Until recently, taking this picture would have been impossible, as the Summer Edition copy recently arrived at my place. I'd been looking for one for at least a decade without ever seeing one for sale, and it's been a highlight in an otherwise fairly dark period of my life (I have recently lost my job among other things).

What made it even better is that I was able to trade for the card too (keeping the trader happy, as he certainly wouldn't have wanted to spend the $2000 ABU asked for it). In my excitement about receiving it, I posted a picture on the Magic: The Gathering Misprints and Oddities Facebook group with the text, "I collect Elvish Archers, so imagine how happy I am that this came in today." To date, 173 people have liked or otherwise reacted to the picture.

Now that the Summer Edition version is in my possession, I feel ready to start on a global set of Archers, extending my quest. This has been my plan for several years, presuming I could ever locate a Summer copy as that would be the hardest by far.

The picture above shows about as much value as a (beat-up) Black Lotus. I'm sure you must be wondering why anyone would want to spend those resources just to collect a usually near-bulk rare. The trader in me definitely agrees with you—it's madness! Yet the collector can't be happier. Let me try to explain why I feel drawn to the Elvish Archers.

My history with the card makes it important to me. I'm sure that if we ask Sig about his Jaya Ballard, Task Mage collection we'll get a similar answer. In fact, I have asked him exactly that. Here was his response:

I wanted to have something to collect—something that transcended finance and could get me excited about MTG. I chose Jaya because I always loved her quotes on some of the older cards. I also read the Ice Age set of books by Jeff Grubb and Jaya was a character in the story that had such a fun personality. Lastly, no one can argue with the sweet art.

If you know a collector like myself or Sig, and know what they are after, you can trade for it knowing you'll be able to move the card. This means that you can pick up cards that others would pass on. Your trading partner is likely to value these cards low, while your collector is likely to value them higher as they are special to them. A quick flip can be very profitable. 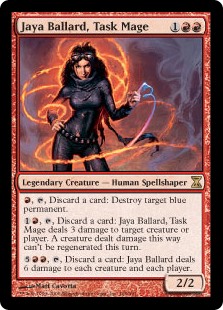 There are many variants of collectors. Sig and I just both happen to have a card we collect (similarly I know a retired player who still wants each and every Ball Lightning I can find for him). I also know people who collect foils, white cards, one copy of every card, Alpha, and more.

Knowing that the Alpha collector was still missing a Chaos Orb allowed me to make a very beneficial deal with him after picking one up when I was in Germany. The set collector would always overtrade for missing pieces for his collection. I haven't been able to trade with the white cards guy just yet, but if we ever do, I know which pages of my binder to point him towards.

The foil guy has gone through my foil bulk several times. He was always happy to give me double the amount in bulk for anything he picked out, letting me double up with little work. I also picked up a couple of foil Swords of X and Y that he gave me about 1.5 times my cost for, because they had been so difficult for him to find.

All this was possible because I knew these collectors' particular preferences. It's hard to predict what a particular collector will like, and it's impossible to predict what the next collector you meet will be after. But you better make sure to pay attention when he tells you—you will want to start picking it up, whatever it is!

2 thoughts on “Insider: The Collector’s Mindset”